In For Honor Knights, Vikings, and Samurai battle each for dominance on the battlefield. If you picture a multiplayer shooter with the guns replaced by swords and with some gameplay elements borrowed from both action games and fighters, then you'll have a pretty good idea of what the game is like.

To recreate the intimate warfare of steel on steel, For Honor has developed its own unique fight system. When facing off against another warrior, you first select the left trigger to lock yourself into a duel with your enemy. The right stick is then used to select from one of three primary guard positions to protect yourself from attacks that come from a left, right, or overhead direction. If your enemy attacks from the same direction that you're guarding, then you'll block the attack. If not, then the blow will land and cause damage. Conversely, the direction of your attack and your opponent's guard position determine whether or not you successfully hit your opponent. You can also choose to deliver a light or a heavy blow - you can execute a light attack faster so it has a greater chance of getting through to hit your foe, but if you hit with a heavy blow you'll do significantly more damage. Those are the basics of combat, but there are additional aspects to it that make battles in For Honor more than a variation on paper-rock-scissors. First, you have limited stamina. Try to string too many attacks together too quickly and you'll run out of stamina, leaving you significantly slowed and at a disadvantage until you can recover. There's also a revenge mode that you can trigger by successfully blocking a sequence of enemy attacks which will give you a temporary boost to your attack and defense skills. Conversely, you can try to break your opponent out of guard mode with a shield bash, knocking them back and opening them up to a follow-up attack, and if your opponent is near an open flame or a vertical drop, you can push them right into danger and perhaps instant death. There are also combo attacks which can be devastating, but which can also be parried or interrupted with the right timing. It's also possible for players to gang up on an opponent, forcing the lone player to watch for and guard against flank attacks as well as those from the primary foe.

All of these aspects work together to make each fight a duel where the two players are trying to outfox each other as much as they are trying to out-muscle each other. Things are further complicated by the fact that there are twelve character classes in the game, and you'll need to adjust your tactics based on the type of opponent that you're currently facing. In this way, For Honor is like a good fighting game - you need to know your opponent's moves, how and when to counter them, and which of your attacks will give you the advantage. If you feel that multiplayer shooters rely too much on twitch skills, you'll probably appreciate how For Honor rewards the smart fighter more than the fast fighter.

For Honor is not exclusively a multiplayer game, although it is primarily multiplayer-focused. There is a single player campaign in the game, but if you're interested in For Honor strictly for single player you won't get your money's worth out of it. The campaign is broken into three chapters, one for each faction, of six levels each, and you'll be lucky to get six hours out of it, and then only if you have a little trouble learning the fight system or feel compelled to find each level's handful of hidden "observables" or breakable objects to get full completion credit. Some players will probably even finish it on the order of four hours. 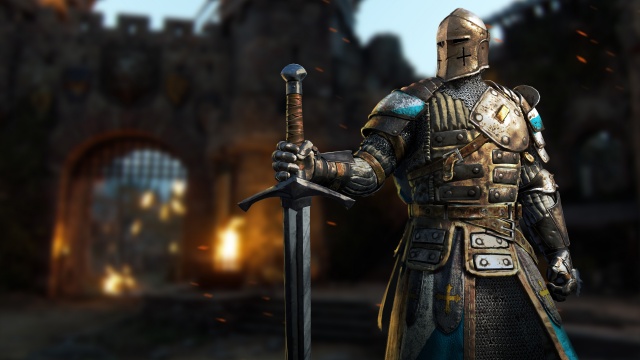 The campaign tells the story that is used to explain why Knights, Vikings, and Samurai are all fighting each other in a three-way war. In an alternative world from ours, these three groups are fighting for the limited resources of a land each has laid claim to, with the losers facing certain demise. The campaign story is on the light side, weaving just enough narrative to give an excuse for each level while leaving plenty of holes unfilled. Since the campaign has you play each faction's four classes through each faction's chapter's six levels there's no continuity of character for you to get attached to and so the levels feel more like a series of missions than a cohesive story. While there are some different gameplay elements tossed into the campaign to make it more than just sword fighting, none are particularly compelling or all that challenging. And the overall challenge level isn't too high; I played through the campaign on the high difficulty setting and outside of an occasional boss fight didn't have much trouble breezing through the campaign.

When it comes to the multiplayer game, matches take place within the game's faction war system. This involves you first pledging your allegiance to one of the game's three factions. Picking a faction here in no way restricts the player classes available to you - you can pledge to the Knight faction and then select a Samurai in one match and then a Viking in the next. In fact, each team in a match can have a mix of characters from any of the factions. So what's the point of selecting a faction? It has to do with the territorial war meta game in For Honor.

As you complete multiplayer matches you'll earn "war assets", a kind of resource that you can deploy to the world map to help defend your faction's territories or to attack enemy territories. After a set amount of time, the game will use all of the deployed assets to update control of the territories. This will continue until the end of the season, at which point players aligned with the winning faction will receive a set of rewards and the whole thing will begin anew again. The current state of the faction war is used to add variety to the game maps. While the layouts remain the same, if you're fighting in a Viking territory that's been conquered by the Samurai, the map will feature Nordic architecture but be covered with Samurai regalia. 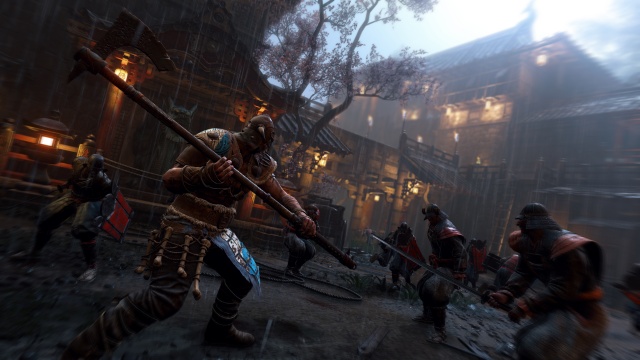 It seems a little strange that you can enter a match on a team with player classes from all three factions, all fighting for different sides in the faction war. You might win a multiplayer match and in doing so help give more war assets to your rival factions. I would have preferred that the game make you fully commit to your faction, limiting your class selection to those available to your faction and putting you into battle with your fellow faction members. It would certainly make it feel a lot more like you were fighting for your faction than is the case in the game. It feels more like you're picking a number, and you'll have a one in three chance of winning a prize in a few weeks.

There are a small handful of multiplayer match modes available in For Honor. Domination is a control point capture mode, Elimination is a team elimination mode, and Duel pits players against each other in one-on-one or two-on-two fights (the latter dubbed Brawl mode). In Domination mode, two four player teams compete to earn points by capturing and holding three control points. The central point is different from the other two in that each team will span squads of minion warriors that will converge on it. To capture the point you'll need to push back the enemy minions from the control point in addition to keeping enemy players from it. When one team accumulates 1,000 points the other team will "break" and will no longer be able to respawn. If the leading team can eliminate the breaking team before it can mount a comeback, the match ends. If the breaking team manages to fight its way back to bring the other team's point total down below 1,000, then the team is no longer breaking and regular play resumes. There is a variant of this mode called Skirmish, which plays the same except without the control points.

Elimination is another four-on-four mode in which all players begin matched against an opponent from the other team. The players can immediately fight each other, or make a run to other players in an attempt to create a two-on-one advantage. When one team is eliminated the round ends, and the first team to win three round wins the match. Duel/Brawl is essentially the same as Elimination, except that matches are reduced to one or two players per team. 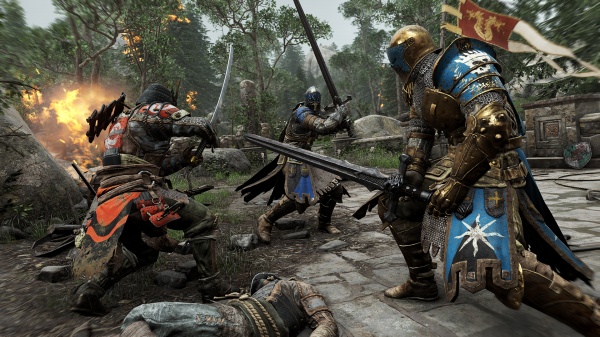 All matches can be played against player or AI controlled teams. It's not uncommon for a player match to include one or more bots to fill-out the teams, either. The bots are competent duelists, though, so don't expect to win all of your matches against bots. Server issues with the game make it fairly common to see players drop out during the load screen and be replaced with bots, so even if you select a player match it's likely you'll be facing your fair share of bots. Part of the problem is undoubtedly the game's use of player-hosted matches rather than providing dedicated host servers, and this also leads to some long load times and an annoying frequency of dropped matches.

The modes included with the game are enjoyable, but For Honor suffers from a lack of variety. You've got what amounts to two different mode types, with no variants available. If you get bored easily, then For Honor may not hold your interest for very long. The motivation to keep going and play the same modes repeatedly comes from the game's character level and gear system. Each playable class has its own level system and unique gear, so there's always the carrot there to keep you grinding to reach a higher level and unlock access to more gear. Each match also brings the opportunity to gain gear through a loot drop or earn more of the game's currency, steel. Steel is used to unlock additional character classes for play, to pay for gear upgrades, and to purchase new outfits and gear packs. Steel is the only currency in the game, so while you can purchase additional steel through the game, nothing is locked behind a premium currency pay wall. That being said, some of the more premium items require a large amount of steel to purchase, so you'll be grinding steel for quite a while before you can afford those items. I have to say, though, that the extensive customization features available are pretty cool, and I found myself going into the customization mode quite often while playing just to check out my new gear and to continually tweak the look of my characters.

For Honor has a unique fight system which makes for a novel experience in the multiplayer game space, and you'll likely enjoy learning the fight system and developing your own tactics for facing the various different classes available in the game. However, the experience is weighed-down a bit by a lack of variety to the multiplayer modes, a confusing and superfluous meta game, and the lack of dedicated servers. And if you're looking to play the game strictly as a single player experience, you'll likely come away from the game disappointed. If you're looking for something different in a multiplayer game and can look past a game's flaws, though, you'll likely have fun with For Honor.

Final Rating: 78% - A unique multiplayer experience in spite of its flaws.