There's a storyline to the game's main mode which has to do with the alien Nitros Oxide forcing Crash's friends and enemies to race each other for the right to take him on in a race in which the fate of the Earth will hang in the balance, but it's basically there to provide an excuse for kart racing, under the assumption that you need a narrative reason for it. You'll see a cutscene here and there, but for the most part you won't see anything pertaining to the story but that really doesn't matter since we're all here for the racing. 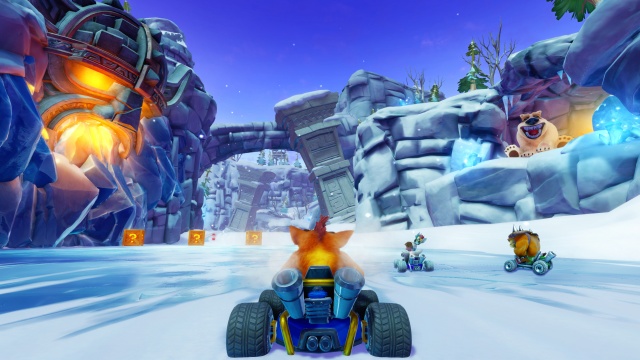 The game is divided into a series of hub zones that each have warp points to a few tracks. Come in first in each race and you'll unlock a boss race, beat the boss and you'll unlock the passage way to the next hub zone. While that may sound like an easy enough way to make your way through the game, those first place finishes are going to be hard to come by.

Each race is run for three laps around a circuit against seven AI opponents. In addition to having to contend with the track twists and turns, most tracks also feature a number of environmental hazards that can knock you out of the race for a few precious seconds. Crates are also set on the track at certain places that contain power-ups. Some are weapons you can use temporarily disable opponents, some are used to protect you from opponents trying to do the same to you, and others like the turbo boost will give you a temporary advantage. You can also get creative with some of the power-ups, for example dropping a TNT crate onto the track behind you can block an incoming missile. The power-ups certainly add some chaos to the races, good driving skills alone won't be enough to win a race, and for each time that you get that perfect power-up there will be others where another racer will use that perfect power-up on you, you'll get a shield when you needed a homing missile, or you'll miss picking up a crate entirely.

Even without the power-ups it isn't easy to win a race in CTR. Even on the easiest difficulty level the competition is pretty tough, and if an opponent gets out far enough ahead of you, they will be almost impossible to catch. Conversely, it is really hard to hold onto a lead, the competition tends to rubber-band themselves back into competition and you're always one homing missile away from losing the lead. In addition to all of this, the tracks take some skill to navigate. This isn't in any way a kart sim, but it takes a lot more skill than other kart racing games. One of the tricks that you'll need to master is the turbo boost. Power-sliding around turns will build turbo power which will fill your turbo meter. You can then use that turbo to give yourself a speed burst. It's not the easiest thing to get the hang of and isn't all that intuitive, but without it you will have a really hard time winning on any but the easiest tracks. When you finish first on a track, you'll unlock additional race challenges on them, and these are even harder. Relic races challenge you to finish within a set time limit, but you can stop the clock if you hit the crates on the track. Hit a crate with a "1" on it and the clock will freeze for one second, and so on. The crates don't reappear after you hit them, though, so once you use one it's gone. Even with the crates making it to the end by the goal time will push your racing skills. CTR races require you to both finish first in the race and to find and drive over three tokens on the track, a "C", a "T", and an "R". These tokens each sit in hard to reach locations nowhere near the middle of the track, and since it's hard enough to come in first as it is, you can imagine how much more difficult it is to come in first when you need to take a detour three times during the race.

You can play through the campaign in a couple of ways. The first is based on the original game - you can select one racer and stick with them for the entire game. There is one default difficulty in this mode, and it's 1990s videogame hard. The new mode lets you change your racer at will, which is more than just an aesthetic choice. Each racer is rated in three categories - speed, acceleration, and cornering - and being able to select the right racer for the right track can give you the edge you need to come in first.

In addition to being challenging, the tracks are really imaginative and gorgeous. There's a large variety to the track styles and locations, and every one of the 21 tracks included in the game is packed with detail and filled with fun side animations. It can be fun to watch other people play just to get a chance to see everything that is going on above and to the sides of the track that you might missing when you're concentrating on the racing. The game doesn't require you to beat a track in the campaign to unlock it, so everything will be available to you in the single player arcade, local multiplayer, and online modes. In addition, Activision has announced the CTR Grand Prix, a series of free game updates that will add even more tracks to the game, as well as new characters and customization options.

Speaking of customization options, they are really extensive in CTR. You can unlock additional character skins for each character, each of which has unique animations, as well as race in a variety of different karts. You can then customize those carts even further with color schemes, stickers, and tire sets. None of these have any effect on gameplay, but it's fun to be able to create a unique look for your racer, especially when you're taking on other gamers. Not everything is unlocked at the start, though. Some items require you to accomplish a goal in the campaign in order to make them available, while others can be purchased by the coins that you earn from racing and competing in events. There's a Pit Stop feature that rotates in new content that's available for a limited time that you can also purchase with coins.

The single player campaign is fun, but its difficulty will prove frustrating to some gamers. Luckily there are plenty of other modes that can be enjoyed without the pressure to come in first in order to advance. You can play any of the tracks on their own as a single race, or compete in a number of modes that include the Relic and CTR races, and even an arena battle mode in which you play on a battle arena track littered with power-up crates. All of these can be enjoyed by up to four players locally in split-screen mode. There is also full support for online play, and you can set-up private lobbies or use the game's matchmaking to find opponents for you. These races support up to four human players, with AI-controlled racers filling out the remaining spots until there are eight competitors in total.

Overall Crash Team Racing Nitro-Fueled is an enjoyable kart racer. The karts are fast and the tracks are challenging, so the campaign mode can be a little frustrating to casual and younger gamers. Multiplayer racing is a lot of fun, both locally and online, and you can easily get in a couple of races when you only have a few minutes of game time available. I love all of the customization options, but picking up all of the coins that you need and accomplishing all of the goals required will take some time to get through.

Final Rating: 82% - Crash continues his comeback with another blast from the past remade for the present.