After laying low for years before making a surprise and much loved guest appearance in Uncharted 4: A Thief's End, Crash Bandicoot has already resurfaced again, but this time he gets to do so in his very own game. Well, games. And while those games are new, they're not exactly new. Crash Bandicoot's N'Sane trilogy takes three Crash games from the PlayStation - yes, that's 'PlayStation' without a number following it, the same console that ended its life with the PSOne moniker - and puts them into a single collection. But these aren't those games in their original forms, nor are they ports of the original games that have been given a bit of a graphical upgrade on their way to re-release. Developer Vicarious Visions has rebuilt each of the three games, Crash Bandicoot, Crash Bandicoot 2: Cortex Strikes Back, and Crash Bandicoot: Warped, from the ground up. In doing so, they have made the Crash games look gorgeous and sound wonderful. The characters, environments, and cutscenes look every bit as good as any platformer on the PS4, and the game's face certainly hides the fact that the originals first appeared two decades ago. However, the developers also remained true to the original gameplay, and that gameplay can be very unforgiving.

You'll need to be very precise with the timing and location of your jumps because the game doesn't give you any margin for error. The tight tolerances on the jumps feel even tighter because the control precision feels twenty years old as well. In preserving the original game's feel, the developers also preserved what was frustrating about the original Crash games. It's difficult to get into a rhythm like you can with modern challenging platform games like Super Meat Boy, and dying on a jump that you easily cleared on a previous run for no discernable reason is a common occurrence in the game. The same is true of Crash's spin attacks - start a spin just a touch too soon and you'll come out of it right next to the enemy who will one-hit kill you before you can do anything else. 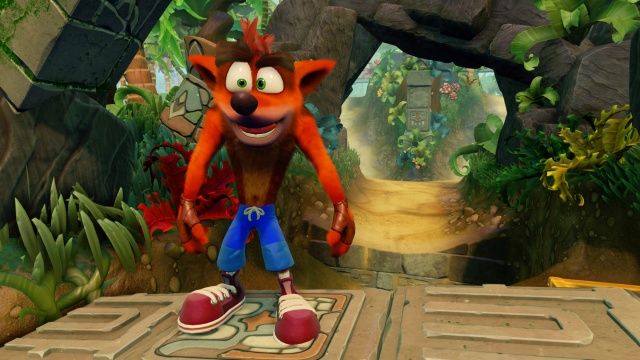 The one-hit kills are coupled with another old school platformer feature, limited lives. Many of the levels in all three Crash games are relatively short, so in general you'll get through a number of levels before you run out of lives. The game implements a modern save system, though, so you can pick up the game again with the only penalty being that you'll have to begin the level your game ended on from the beginning. This can be frustrating on the longer levels, though, as you can easily burn through all of your lives before reaching the end and then you'll have to start them all over again from the beginning.

The level designs become a bit more diverse as you make your way through the second and third games, but they all fall into a handful of styles. The standard level puts the camera behind crash and the level scrolls towards you as you move. Horizontal movement is kept pretty constrained by the tight lane design of the levels, and dangers primarily consist of pits and enemies that move back and forth between patrol points. A variation on this design puts you on the back of an animal or in a vehicle, which turns those levels into on-rail carnival rides. Another set of levels flips the direction of travel so that Crash is running towards the camera while a giant boulder or large animal gives chase. These levels often become exercises in rote memorization as you'll need to remember each obstacle's location and anticipate them before they appear on the screen. The last major category of levels feature 2D side-scrolling platforming action that play like classic platform levels.

The basic goal of each level is to reach the end, but there are additional challenges for those who like to get 100% completion in their games. Each level is filled with crates for Crash to break, most of which award Wumpa fruit, a currency of sorts that are converted 100 at a time for a new life. Finding and breaking all of the crates is the first additional challenge. Once you complete a level it can be replayed at any time, so you can try to earn full completion on it by hitting all of the crates. You can also replay completed levels in a time trial mode, so there's plenty of extra mileage in the game for completionists. 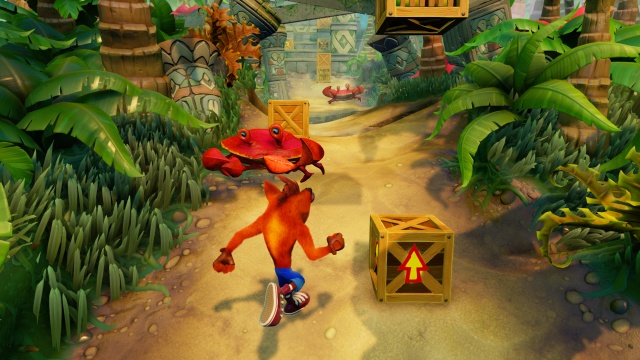 The game collection is set-up so that you can play the games in any order that you want. You can begin with Crash Bandicoot, start out with Warped, or play a level in one game and then jump to another game to play a different level. You'll need to back out to the title screen to switch between games, but overall it's not really a very long process and you'll be back to playing in short order. One new feature added in this new release is that you can now play most levels as Coco, Crash's sister. Coco has the same move-set as Crash and controls the same as well, so switching to Coco is purely an aesthetic change.

If you have a nostalgic love of Crash, then this game collection will certainly bring back a lot of memories. There were plenty of "hey, I remember this level" moments for me as I played. Like me, though, you might not remember the controls being quite like this, especially since you'll find that you've evolved along with platform games over the past twenty years. If you've never played a Crash game before, then you may find the level design constricted, the basic enemy movements somewhat simplistic, and the controls too unforgiving. The developers have done a really good job of bringing the game's visuals up to date while retaining all of the game's original charm and humor, but platform games have simply evolved over the past twenty years, and even though the game has a modern look its gameplay is strictly old school.