If you play Extraction online, you play with a squad of three players total. The game has an offline mode where you can play solo as well. Usually games give you AI partners, but Extraction works fine without them and it eliminates any AI partner complaints that I usually have. From the start, you choose from a list of agents with their own unique skill sets and weapons. Each skill set has either a cooldown or you must replenish its supplies through pickups in a level. Some agents have special attacks, some have information-based skills (seeing enemies through walls) and some can heal or go into a stealth mode among other abilities. Each agent also has their own set of weapons that they can carry into battle. You start out with one gun unlocked per agent, but others can be unlocked as you level-up your character. Each agent has their own set of levels to gain so you have to play all of them eventually.

The basics of each level is to kill off any Archaeans and destroy their nests (spawn points) on the way to the next part of a level. While killing off Aracheans, each level area will give you a certain objective to fulfill. Capture an enemy, tag nests, extract a soldier, destroy a group of nests are some of the objectives that you’ll be asked to perform. Level objectives are totally random – you never know what you’ll get per playthrough. Some objectives feel way easier than others (such as tagging nests) and some are easier based on your supplies. Thankfully, you get to see what the objectives are before you choose your agent and supplies (so you can carry in smoke grenades for objectives that want you to stealth kill a certain enemy). Objectives are totally optional and even level progression is optional. You can extract from a stage at a panel at any time you want. 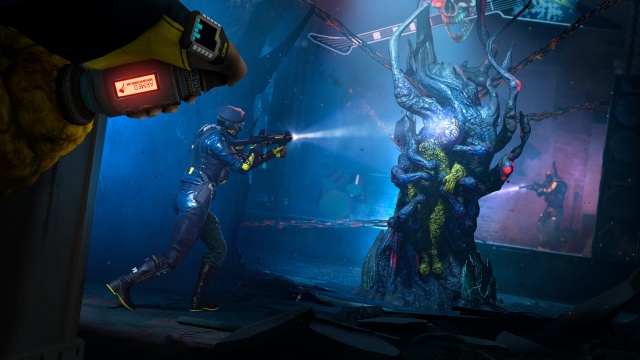 It’s highly advised to extract early if you’re low in health. If you lose all health in a level, that agent will be labeled as MIA and you’ll have to choose another agent to then go back into the stage and extract the fallen agent. You also lose a certain amount of experience points. The fallen agent extraction becomes one of the main objectives in the stage for the next agent. This setup can be kind of annoying when you’re getting adjusted to the game, but I honestly kind of like it. It penalizes you for getting too greedy and not extracting early and it forces you to play other agents. So basically, when you’re just a few kills away from a certain objective and in the danger zone for your agent, you have to decide to risk it all and go through with the objective or extract early and bank what you got. Agents that are extracted from a level and agents that are damaged in a level need time to recover as you progress through areas with other agents.

Performing all objectives in a level will give you the most amount of experience per level. Experience will boost your player level and unlock new areas. There is also a list of files that can be unlocked by performing certain extra objectives per stage (such as kill a certain number of enemies of a specific type or tag a certain enemy a number of times). The percentage completion next to each area is based on the number of files gained. The weird thing about level progression is that there is really no need to go through each level in order. You could simply play one level over and over and rise in player level then unlock all areas just by gaining experience. There is no need to play every level.

Being a Rainbow Six game, this game has some very finely tuned gunplay. The gun aiming and shooting is quite exact. The aiming is spot on for the most part. I do feel like I miss a few shots here and there when trying to aim at some smaller enemies, but I most often hit my target. You can aim your gun slightly sideways to see around corners. The overall gameplay and surroundings make the game feels very immersive.

The common enemies have blade-like appendages that they attack with once they spot you. Other enemies include small archaeans that explode or release gas once hit and enemies that fire needles from a distance. Depending on the difficulty you choose, some enemies can mutate into higher tier archaeas as well. Objectives where you have to capture or kill a certain archaean will have a mutated archaean as the enemy target. All archaeans leave behind sprawl (think of Venom symbiote skin) once defeated. Areas of sprawl will cause you to go slower while moving through it and it will cause enemies to be more powerful while standing in it. Sprawl can be shot to remove it around the bullet area. 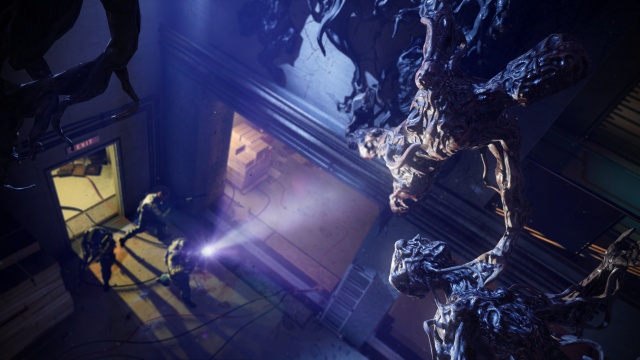 All enemies are unaware of your presence until they see you. Once they see you, they will attempt to call out to nearby enemies. If you allow them to finish their call, enemies in the nearest rooms will be alerted and the nests in those rooms will start to produce more enemies at a quicker rate. One thing I like about this setup is that your full stealth is not totally blown by getting seen once. Only nearby rooms are alerted, so you can regain stealth by killing nearby enemies and nests and not getting seen in upcoming rooms. Since all objectives are timed, it’s hard to maintain complete stealth at all times, but you can to some degree since not all stealth is ruined from the first sighting.

The game looks and moves very well. It moves at a smooth 60fps on Xbox Series S. It also has a good bit of atmosphere to it. Buildings often have parasite rock formations growing out of the ground. Sprawl is all over the rooms that archaeans are located inside. Besides cutscenes, the game also has a good bit of lore within levels. You can examine objects every now and then to gain extra dialogue from your radio team. The basic story to the game is that parasite aliens are trying to take over the earth and your team must gather intel on them in order to find a way to defeat them. The main characters in the game (researchers) are shown in cutscenes and heard over radio.

This game is an overall hard game no matter what difficulty you choose. There are four main difficulties that the game has to offer. Each difficulty increases the enemy count and increases the chance for enemy mutations. When I first started, I was dying all over the place and extracting early, but once I got more adjusted to the game the deaths became less frequent and I started to try out higher difficulties (total of four difficulties). The game definitely ramps up the difficulty per increase however. 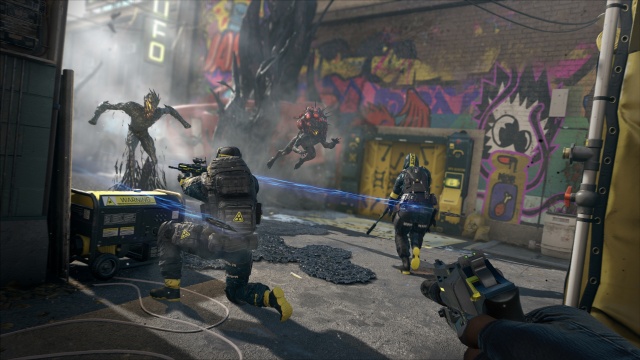 The game is a bit repetitive in structure. Objectives are constantly being mixed-up but you’re still performing the same objectives over and over. Some objectives stand out as being more fun than others. The overall stealth in the game is good, but trying to get a stealth kill is annoying. It can be hard to sneak up on enemies. It’s like they turn around and see you all the time unless you approach them directly from behind all the way toward them. When one of the objectives is to stealth kill an elite enemy, this can be a bit annoying. Thankfully, the smoke grenade gives you a near instant blinding and stealth kill however, but it’s annoying to have to resort to this option so often.

Overall Rainbow Six Extraction is a very welcome change for the Rainbow Six series. If you’re a fan of PvE games (such as World War Z and Aliens: Fireteam Elite, definitely give this game a try. I feel that many Rainbow Six regulars will not appreciate Extraction as much as I do, which is understandable. It’s a big change of direction for the series, but one that I definitely enjoy.

The Bad:
- Can get repetitive
- Stealth kills feel too difficult at times

Final Rating: 75% - Rainbow Six Extraction is a great addition to the "Player vs Enemy" games out there.