Project Resistance is a 4 versus one 1 (4v1) multiplayer online survival game. This game started out as its own game then it was announced it was going to be packed in with Resident Evil 3. Project Resistance is free with a Resident Evil 3 purchase, but it's a separate download and a full game of its own. The game can be practiced offline but other than that, it's an online only game.

The story to the game is rather simple - it takes place in an Umbrella testing facility. A mastermind tests out his/her latest bioweapons against a group of infected survivors. The mastermind must collect combat data from the bioweapons as they fight against the survivors and must keep the survivors from escaping the facility in the process. One player takes control of the mastermind, while four other players take control of the survivors. The game has a brilliant setup for a Resident Evil online multiplayer mode and it seems rather balanced on each side when both sides are around the same skill level. 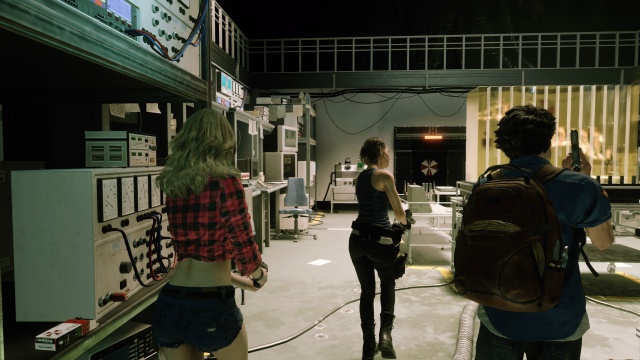 Matches take place in one of four different stages. Each stage has the same basic goals that are divided into three sections. For the first section, survivors must find three puzzles pieces and return them to a puzzle near a door in order to leave the area. The second section has the survivors hunting down an armored zombie that carries a keycard and once the keycard is retrieved, the survivors must activate three control panels in order to unlock a door. The third section requires survivors to destroy three cores in order to open the exit door. Once the exit door is activated in the final section, a standoff occurs where the survivors must fend for their life for a certain amount of time until the door opens. All stages play out with these three sections, but overall structure of the stages change dramatically depending on the stage chosen. The mastermind player can randomize the objective placements or choose from a few different scripted setups.

There is a total of six survivors, each with their own unique abilities. Survivors all have a "fever attack" that they build up while fighting off bioweapons. Each fever attack is different depending on the survivor. Samual will enter a state where he punches enemies and objects and takes off more damage while the ability is active and other survivors such as January will instantly shut down all cameras in a certain range around her. There is also a less powerful skill with a cooldown for each character and all survivors also have their own passive skills that are active all the time. 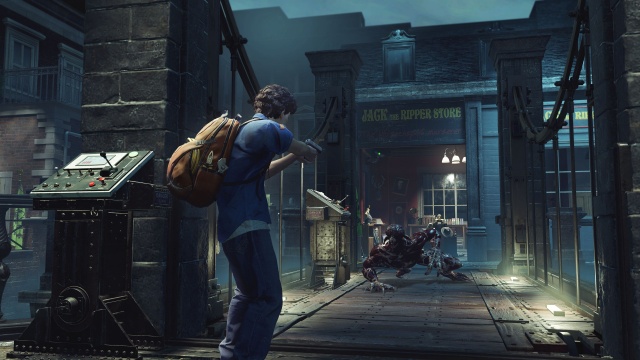 Playing as a survivor is like playing the main game of RE 2/3 remake - the gameplay is presented in third person and you can equip different weapons and you have your own limited inventory space. In between sections, you can buy new items from an item crate. Item crates carry more powerful items as you progress more through the stage and you can credit for buying items as you progress and they can also be picked up while exploring the stages. Survivors can equip melee weapons to hit enemies from close range. Melee weapons can break but they can be repaired using a repair kit. Some survivors excel with melee weapons and some are better with firearms. Skills that give attribute bonuses can be unlocked and equipped to each survivor as well - all survivors share the skills. The survivors core focus is teamwork. Without a good team of survivors, the inexperienced players can easily drag down an experienced player. In the second section, if the player that gets the keycard does not know what to do with it, then that alone can spell out failure for the entire time.

The mastermind is like playing a strategy game. There is a total of four masterminds, each with their own unique abilities and bioweapons. You have access to cameras throughout the various rooms on each map in order to view what is going in that room and you have full knowledge of where each key item is located based on the map that you can pull up. You can use the map to switch between cameras or simply use the shoulder buttons. The mastermind can spawn enemies, camera turrets, lock doors, place traps, enhance enemies as well as many other things in order to waste the time of the survivors' team. Actions for the mastermind are decided based on a deck of four randomly generated ability cards that will constantly spawn as you use them.

The mastermind has a lot of power, but the player needs to know how to use it. You can't just simply start laying out enemies in front of a group of survivors and expect to win. A bit of strategy and overall trickery is needed to win with the mastermind. The survivors can fight back against a mastermind by obstructing the mastermind's view by damaging his/her cameras, which the survivor January excels in! The mastermind can take control of certain enemies and hunt down survivors - the controlled enemy seems to get an enhancement in health and damage dealt compared to other enemies. The CPU controls all other enemies that you spawn on the map. The mastermind also gains access to an ultimate bioweapon (type of tyrant or other power) that appears after a certain amount of time. Once this power is activated, you take control of that super-powered enemy for a certain amount of time and get to hunt down and damage or kill survivors to waste their time. This super power for the mastermind gives that player some extreme help for a while, but again, you have to know what you're doing because the survivors can fight back and get the ultimate bioweapon despawned.

As already mentioned, the game can be played offline for learning purposes. You can use the offline portion to explore stages or learn how to fight AI enemies. Playing as the mastermind offline is rather useless because the AI doesn't even put up any type of fight - they just stand in place. The mastermind and the survivors also have their own tutorials for learning the basics of the game. It's really too bad there isn't more of a way to gain practice in playing the mastermind offline since playing that side gives you access to many more options that require a good amount of experience to become familiar with. 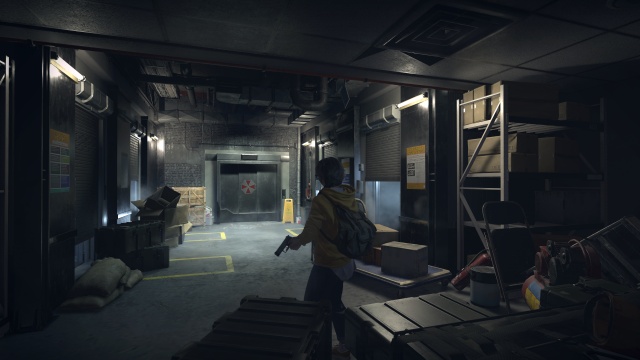 vWhile playing online, the game went rather smooth for the most part. One thing that I definitely noticed is that lag can affect the survivor group badly. I would sometimes get the usual missed shots or teleporting enemies but the worst part was having puzzle pieces that couldn't be placed. Because of lag, I would pick up puzzle pieces then try to place them on the puzzle and the lag wouldn't allow the puzzle piece to be placed - this basically can destroy the first section for the survivor group. Another problem that I had with online is that the matchmaking for playing as the mastermind was always very long. I would get games for the survivor side within about one minute on average, but with the mastermind, I would often wait up until five minutes or eventually just cancel the matchmaking from not finding a lobby.

When everything works while playing online, Project Resistance is quite fun. The overall RE2/3 remake gameplay is not as fun as RE4/5 gameplay, but it's good enough for this online game and both sides are fun to play so long as you know what you're doing. The game is not as good as playing Mercenaries online but it's addicting in its own way - I've been playing it over the weekend and am still playing it, which says a lot after playing stuff like Umbrella Corps and getting bored quickly. I'm hoping to see more content in the future for Project Resistance. It has a good amount of content but it needs more. Project Resistance is overall a good companion online mode for the Resident Evil 3 remake rerelease, so be sure to check it out if you pick it up. Fans of Dead by Daylight should give it a try since it has a similar overall setup to that game, but it's very much its own game. At first Project Resistance doesn't seem like much, but after spending more time with it and learning how to get better at it, it actually is quite a fun game.

The Good:
+ Both sides (survivor and mastermind) are a lot of fun to play
+ The game is overall addicting

The Bad:
- Lag can REALLY go against the survivor in online matches
- Mastermind lobbies take way too long for matchmaking

Final Rating: 75% - While not perfect, Project Resistance is one of the better online games for Resident Evil!