One Piece: Pirate Warriors 4 is the latest action adventure game in the Pirate Warriors series developed by Omega Force. Pirate Warriors 4 is a Musou game published by Bandai Namco that uses the basic gameplay style of other Warriors games such as Dynasty Warriors, etc. The game has its own unique story that takes the Wano arc from the One Piece anime/manga series and changes it into a story that is exclusive to this particular game. All modes allow players to go online and challenge each stage with an online partner.

Pirate Warriors 4 has all the features and gameplay of your average Dynasty Warriors style game, but it is all very fast paced making it a lot more fun. The game also has a ton of variety in its character lineup. You'll be unlocking characters for quite a while! Every character has their own unique feel and a total of four special moves that are mapped to the four face buttons while holding a shoulder button. Special moves charge while fighting enemies. All characters have their own class also. There are technique, stamina, sky and other classes that characters are categorized in with their own unique abilities. For instance, Sky characters can float during one of their special moves. 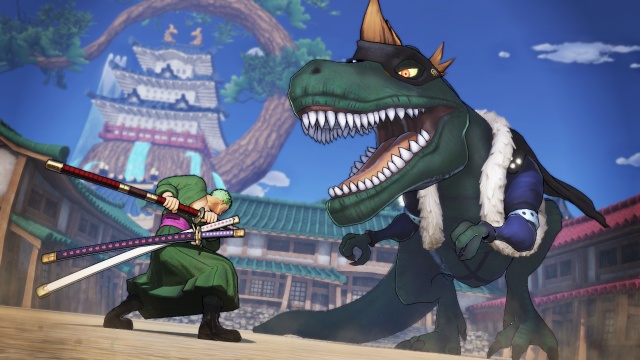 The overall graphics have the usual anime look that you'll find in most Bandai Namco games. The backgrounds have buildings and many objects that can be destroyed while fighting making them a lot more interactive than your usual Warriors game. Enemies can be knocked into buildings or other objects to destroy them. As usual, item pickups can be found in destructible environments. The game also moves really well for a brand-new Warriors game. I often see newer Warriors games run at around 30fps, but Pirate Warriors 4 seems to run at a very solid 60fps the majority of the time. I did experience some slight slowdown from particle effects during special moves, but the game handles the load of enemies and overall chaos rather well for the most part. It runs just as smooth as a definitive edition title that has been remade for newer consoles, but this is a brand-new game!

The main modes of the game are Dramatic Log, Free Log and Treasure Log. Dramatic Log will take you through each chapter of the story that the game has to offer. Dramatic Log features many cutscenes with Japanese dialogue (and English subtitles). The overall narrative is easy to follow even for those that have no history with One Piece (like me). Fight through chapters by accomplishing a list of objectives per area and you'll advance the story and unlock the next chapter. In Dramatic mode you'll unlock many new characters but you're forced into playing only certain characters. The true value of this game comes in the other modes (Free and Treasure) where you get to try out all the other characters. Free Log allows you to play back through story mode with your choice of whichever character you want. Stages in Free Log unlock as your play through Dramatic Log. 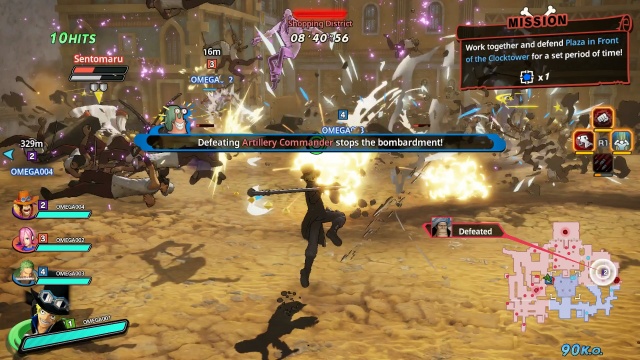 Treasure Log takes you through unique stages where you'll face off against a variety of other armies and characters. Treasure Log has no story, it's all about the gameplay and finishing the stage. Each stage has its own objectives as usual, but they are mainly about defeating a certain opponent. It's very easy to get lost in Treasure mode with the sheer amount of stages in each difficulty and the overall amount of unlockables. I constantly needed to quit playing the mode but kept saying "Just one more stage".

The only annoyances I encountered with Pirate Warriors 4 was the camera sometimes moving behind buildings and, every now and then, the timed objectives got annoying. While playing through Warriors games before, I would sometimes lose to a timed objective without realizing what to do and this game is no exception. Overall, One Piece: Pirate Warriors 4 is one of the best Musou games that I have played (for the ones based off anime). I'm not a fan of One Piece, but this game is really good and I think all Warriors fans should give it a try. The character variety and fast gameplay make it highly enjoyable.