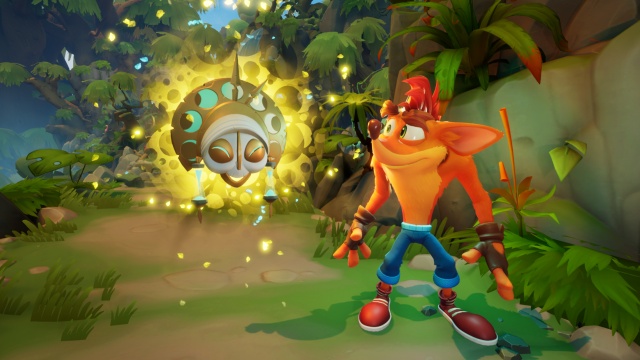 The “4” in the title for this installment couldn’t be any more relevant to this game since it is a direct sequel to Crash Bandicoot Warped. With the help of Uka Uka, doctors Neo Cortex and Nefarious Tropy escape from their prison in the past. After discovering that the time rift they use to get out of the past links to the rest of the multiverse, they formulate a plan to conquer all dimensions. After being warned about their evil intentions, Aku Aku recruits Crash and Coco to find the Quantum Masks in an attempt to stop the baddies from ruling over the dimensions.

If you’ve played the original Crash trilogy, you’ll be able to jump right into Crash Bandicoot 4 without any problems. It plays almost exactly the same from the start. The visuals have definitely improved a lot but the game still plays out like a 3D platformer that plays both 2D and 3D at times. There is a bit more variety to make the platforming a bit harder here and there. You still have your standard jumping, high jumping, double jumping, sliding, spinning and everything else that Crash is famous for along with some new elements such as phasing objects in and out of existence while moving in between them. The new features are brought on by the quantum masks that you rescue in the game. The levels where Crash run towards the screen look the best they have ever looked before with the new graphics engine.

While going through each level, you’ll still be challenged to collect Wumpa fruit and gems throughout each level. Crash must still destroy crates to find fruit and there are still explosive and nitro crates to avoid while doing so. Gaining all gems in a level will unlock new outfits. Every area has a certain outfit to unlock for both Crash and Coco. This game is already hard when trying to get through the levels normally, but trying to get through a level with 100% completion makes it way harder. Though the game is hard, it never does get truly frustrating while going through it normally. The difficulty is honestly just right. It’s as hard as the original series but it can be toned down via the options menu to make it more accessible to newcomers. 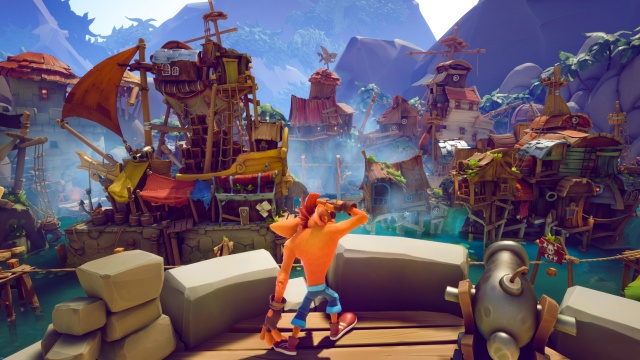 In between levels, you’ll go to a level select field similar to a Mario game. New levels are unlocked by completing previous levels and there are sometimes bonus flashback levels that are unlocked from collecting VHS tapes in other levels. The various stages of Crash 4 have a bunch of variety in them. Some of them are your standard platforming levels, but as they continue, they start to offer much more things to do, such as grinding and swinging from pipes and other forms of variety. The levels are very well designed in this game. They do not get boring or feel repetitive. There are some really good boss fights in the game also.

The cutscenes that you’ll get in Crash 4 are a true beauty. If you’ve played Naughty Dog platformers, such as Jak and Daxter then you’ll know that their characters are always full of life during cutscenes. The expressions are overdone and the character voices fit perfectly along with the zany dialogue. That’s the exact way Crash 4 is, which surprised me greatly. The cutscenes look like they were done by Naughty Dog. The voice acting is great and so are the sound effects. Cutscenes are a joy to watch just like in the original Crash trilogy.

The controls are crisp for the most part. There are several button combinations that you’ll have to get used to when using some of Crash’s powers that will leave your fingers in knots, but it’s not so bad once you get adjusted to it. The only true major concern that I have with the controls is the thumbstick on the joycons. The default joycon thumbstick doesn’t always move Crash all that well, so I recommend using another controller on Switch. Just like in other Crash games from the original trilogy, jumping to some platforms can still be tricky with the 3D look of the game. 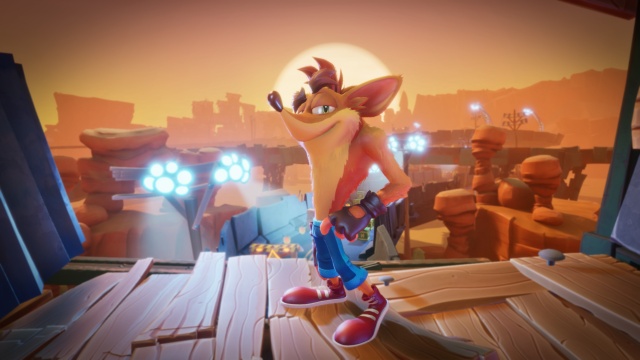 After so many mediocre sequels to the original Crash trilogy, it’s great to see Crash Bandicoot have a worthwhile game again. The difficulty may be hard, but it’s the type of difficulty that kept me trying. I never got truly frustrated at the game since the game gives you the option to play it like the original trilogy (with limited lives and restart level once all are gone) or with a new style (unlimited lives and continue from checkpoints). It’s only super hard if you try to 100% all stages, which is a good challenge for diehard players. Crash Bandicoot 4: It’s About Time is every bit what a Crash sequel should be and is very comparable to the Naughty Dog installments.

The Good:
+ A refreshing return to the Naughty Dog-style Crash games
+ Visuals and sound are spectacular
+ Difficulty is just right (very hard but not ridiculous)
+ The cutscenes are well animated (they seem to be 60fps even on Switch!)
+ The Switch version is portable unlike the other versions

The Bad:
- The Switch version has a framerate problem during gameplay (always around 30+ fps)
- The joycon thumbsticks aren’t the best for movement, so think about another controller

Final Rating: 80% - Crash Bandicoot 4 is a fantastic platformer. Be sure to buy it on whichever platform you can get it on!