Atari 50: The Anniversary Celebration Is part game collection, part documentary. You can just jump right into the game collection – which spans arcade, console, and computer games of the last 50 years, as well as some original re-imaginings of those games – but if you do, you’ll miss out on a fascinating look at the history of one of the most influential game makers of all time.

The game breaks down Atari’s history into a series of tracks focused on a different era in the company’s history. The different tracks follow a rough chronological order, but there is some natural overlap. For example, the 2600 was just coming into its own when the arcade industry was experiencing its golden age. The five tracks are Arcade Origins, Birth of the Console, Highs and Lows, The Dawn of PCs, and The 1990a and beyond, and each one can take you hours to get through. 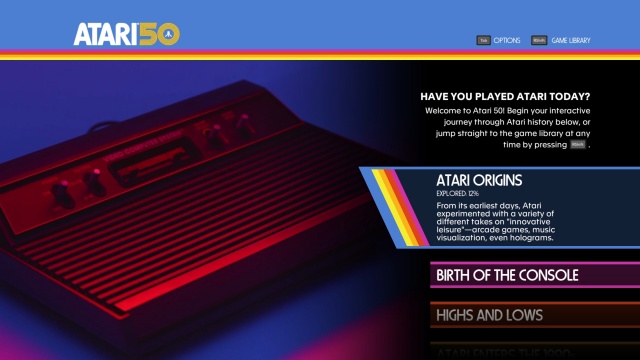 Each track is organized as a horizontal timeline, with each node on the timeline featuring a vertical track of nodes dedicated to a particular game or topic. The nodes themselves each contain a variety of interactive items. There are video clips to watch, old marketing materials and manuals, as well as games that can be played. Some of the clips feature archival footage from documentaries and news reports, but the vast majority of them are original interviews created for this collection with the original programmers behind the games, as well as contemporary developers who were inspired by Atari games. Anyone with an interest in classic gaming will find it fascinating to learn about, say Adventure, hearing how the concept came about and the programming involved, seeing the original game’s artwork and manual, hearing Tim Schafer discuss how the game inspired him, and then finally getting the chance to play the original game. Even those who really know their stuff will be treated to some surprising gems, such as the chance to play the fourth Swordquest game, Airworld, which was never released, and that’s not the only unreleased game you’ll find in this collection. Pay attention and you’ll find ways to unlock even more games as you make your way through the timelines. 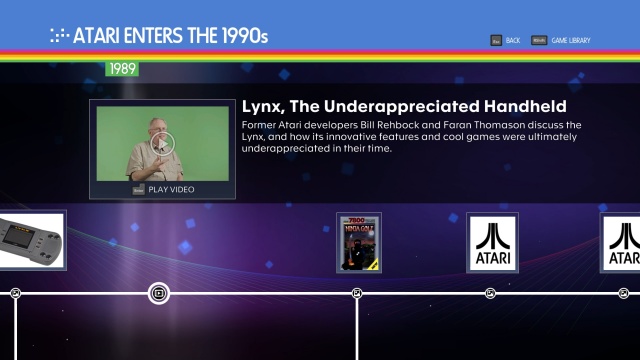 The bulk of the playable game collection here is made up of 2600 and arcade games, but there are also plenty of games from Atari’s computer lines, as well as its less successful consoles, the 5200, 7800, and Jaguar. You can even play a few games from Atari’s portable system, the Lynx, as well as a handheld Simon knock-off from the 1970a, Touch Me. You’ll also find some modernized versions of some of the games, with updated graphics and gameplay enhancements, as well as a couple of original games inspired by the classics. You can choose to play most of the games in their original aspect ratio, complete with raster scan lines if you’d like, with or without borders, or in a stretched version for modern 16x9 screens. 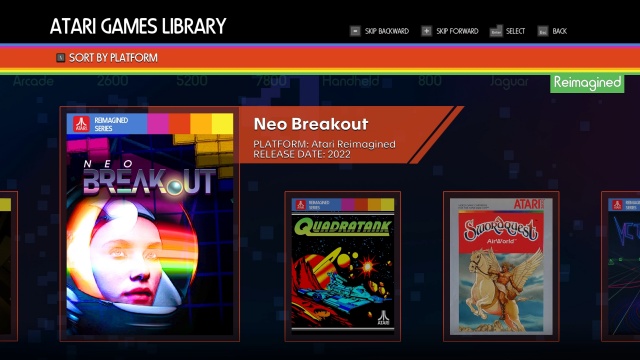 In all there are over 100 games packed into this collection. While some of these, especially the arcade classics, will have you coming back to play multiple times, there are plenty of titles here that will provide you with a couple of games played out of curiosity. Some of the very first arcade games and many of the 2600 games are pretty primitive by today’s standards, and the gameplay simply has not stood the test of time in the same way that games like Asteroids, Tempest, and Centipede have.

I’ve played plenty of retro collections that either just give you a library of games alone, or accompany the games with a bunch of box shots and manuals that you often have to unlock through play, all thrown together under a menu almost as an afterthought. Atari 50: The Anniversary Celebration is nothing like those game collections. I thoroughly enjoyed making my way through each chapter - the videos are fascinating and playing the games after learning about the story behind them made me see some old favorites in an entirely new light. Atari 50: The Anniversary Celebration is a game-changer – it’s the way all future retro game collections should be made.

Final Rating: 90% - This look back at the first 50 years of Atari is a look into the future of how retro game collections should be made.