Arc System Works is surely a busy company nowadays. After the release of Guilty Gear Xrd and its many upgrades, they went on to release Dragonball Fighter Z, BlazBlue Cross Tag Battle and Granblue Fantasy Versus, which were all some very impressive fighters. All has been quiet with Guilty Gear for the past 5 years then we get news of a sequel that will completely reconstruct the franchise. Guilty Gear Strive is the latest (and greatest) Guilty Gear that follows the Guilty Gear Xrd releases. The game still has the familiar Guilty Gear style gameplay, but changes up a few things making it a much better experience overall.

Story-wise, Strive takes place after the events of Guilty Gear Xrd. We’ll get to the story part later. We don’t play fighting games for story! Anyway, let’s get to the gameplay. First of all, this game looks fantastic. If you’ve seen trailers or even some sample gameplay of this game, you’ll know how good it looks. The character models are some of the most animated models I have seen in an anime-like fighter. The movement is so fluid and there are tons of eye candy in the fighters’ flashy animations. Backgrounds looks just as beautiful and they really match the character models extremely well. The roster is composed of fifteen characters. Returning characters include Sol Badguy, Ky Kiske, Chipp Zanuff, May, Axl Low, Potemkin, Faust, Millia Rage, Zato-1, Leo Whitefang, Ramlethal Valentine, Anji Mito and I-No. The two new fighters that join the cast are Nagoriyuki, who is a vampire samurai that can drain his opponent’s blood in order to increase his damage rate, and Giovanna, who is a special ops officer accompanied by a wolf spirit. The game is also planned to have DLC characters as well. 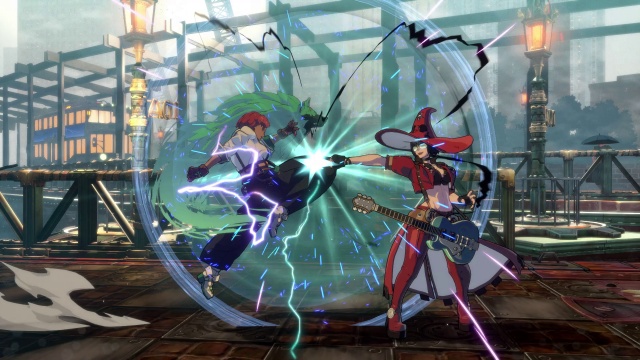 Along with the new characters and new look, the game drops the instant kill move that was well known in other Guilty Gear games. A new “Wall Break” mechanic has now been added when you have an opponent in the corner. While attacking a cornered opponent, you will eventually knock them up against an invisible wall and they will hang there until they recover or you hit them again and shatter the wall, which will send them flying to another portion of the arena. This is basically a type of stage transition that will damage the opponent. The wall break will also reset neutral and take the opponent out of the corner. Not only is it visually pleasing, but it’s really a nice gameplay feature since it gives the attacker the ability to gain some easy damage during corner combos and it keeps the defender from having to guess on what attacks are coming during wake-up in the corner.

The game is overall very easy to play. I have not played a Guilty Gear since Guilty Gear X2 #Reload and I was able to easily slide into playing Strive. It’s very welcoming to newcomers depending on the characters you choose to play. Each character has a certain class-type that they fit in, which is shown on the character select screen. Some are much easier to pick up than others. Zato-1 is still one of the hardest characters to play for me. Chipp is a super-fast pressure machine, but he certainly lacks defense. Sol stands out as an easy beginner character but all characters have their own specialties that you can adjust to.

The game has modes for single player and multiplayer and a very extended training mode. The training mode has a basic tutorial that you’ll be asked to play from the start. It also has a Mission Mode that goes over several techniques starting from beginner exercises to more advanced strategies. Arc Systems really wants you to learn their game, which is great to see! Single player modes include Arcade, Vs CPU and Survival. Arcade mode takes you through several opponents with a bit of dialogue in between. The final battle of the mode gives you a partner character that will help you beat the final opponent. Vs CPU and Survival are rather self-explanatory. The game also has your standard 1v1 versus for local play. 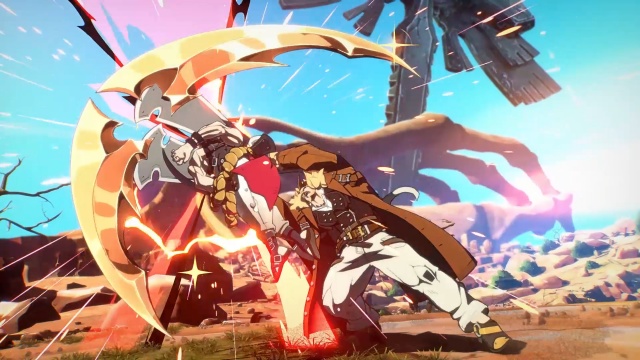 When it comes to online play, Strive really shines! At first, the online lobby looks like kind of ugly with its pixel art appearance resembling an indie game, but then I started to see what kinds of options were available to me! The overall customization and variety in what all you can do in the lobby is pretty nice. You get to create your own avatar (basically a pixel art character) and customize that character while you move through the platforming area of a lobby. While in a lobby, you can ready yourself at one of the many chairs to do battle with other players that choose to approach and challenge you. The overall lobby system is interesting when it comes to interactivity with other players. You can follow other players and message them after meeting up with their avatar in the lobby.

Players are graded and assigned to different floors based on their skill. Whenever you go into a lobby, you get to challenge players in your current skill level. You can move up to the other floors to challenge other players if you so choose. Floors below your skill level are closed off. As you beat opponents, you’ll start to rise in your current floor and lower floors will get closed off. The lobbies have extra modes to check out along the sides, such as a fishing minigame where you can use in-game money to fish out extras such as avatar customization and gallery unlocks. If you’re not too interested in waiting for other players in lobbies, you can also go into a training lobby and wait for an opponent to challenge you while you practice. The online play seemed to work well during my matches. The game seems to use the more popular rollback style of netcode.

Last but not least, let’s get to the story. The game has its own story mode. Unlike most other games, you don’t interact with story mode at all. You simply start the mode and watch an anime basically. All the cutscenes have load screens in between them (around 10 seconds each). The game lets you stop every 25-30 minutes to save your overall progress in the story mode. One impressive part about the story mode is that it seems to be using the in-game character models during the cutscenes, which really goes to show how detailed the models are. Sadly, the mode does not allow you to rewind or fast forward through cutscenes. Pausing the game will bring up a menu that allows for a few options, such as pulling up a logbook that shows a text script of the current cutscene. The story is long-winded and basically your typical anime overall with some characters that have a whole mountain of ego when they speak. Story mode was overall good, but it really needs some type of interactivity to make it more interesting. The story mode clocks in at around 4 hours long. 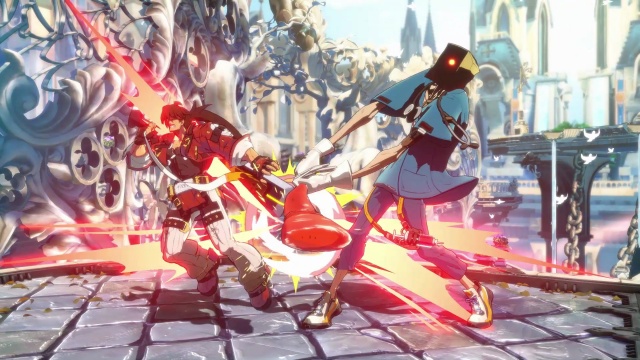 Along with the default Japanese audio, the game also has English and Korean audio. It’s quite impressive that Arc Systems included an English dialogue. The English is way inferior to the original Japanese dialogue, but it’s still a nice touch for those that don’t care to read subtitles. The in-game dialogue is changed in all modes including the story mode. There is also a gallery that allows you to read through a bunch of information about the world of Guilty Gear. It has character biographies spread along timeline trees that help to tell the story of each game. If you’re like me and just now starting to care about the story of Guilty Gear, you’ll have a lot of catching up to do in the gallery. Every time, upon starting the game, you’ll have to go through a “log in” screen for the online portion of the game. The log in will take around 2-3 minutes. Sometimes it seems to log in faster than other times. This waiting can get a bit annoying when you have to go through it every single time you start up the game.

The soundtrack is easily one of the best I have heard for a fighter. All Guilty Gear games have a beautiful rock soundtrack and Strive certainly does too. The game has many lyrical rock tracks. If you’re the slightest bit curious about this game be sure to give it a try. I’m not even really a fan of Guilty Gear, but I instantly loved Guilty Gear Strive when I first started to play it. It’s easy to tell a good fighter when the game feels so fluid and easy to pick up and play from the beginning. In this day and age, fluid online play means a lot for a fighter and Strive definitely has you covered there as well.

The Good:
+ The characters models and their animations are fantastic
+ Perfect rock soundtrack
+ Online play and lobbies work great
+ The game’s gallery mode is really nice for background on the story of the GG series

The Bad:
- Story mode needs some interactivity
- The beginning “log in” to the server is long during each start-up

Final Rating: 90% - If you’re a fighting game fan, you need to play Guilty Gear Strive. Go now and do so!