Ion Fury is a homage to old-school FPS titles. Its publisher, 3D Realms, is famous for developing Duke Nukem 3D, allowing it to have the best backing possible. Developer Voidpoint uses the 'Build' engine, which was used to make such late '90s games. I was born in this period, so I do not have much experience with these types of titles. As such, take my review not only with a pinch of salt, but also as a unique perspective.

The game is a hard sci-fi set in the near future, where a permanent order of martial law is in effect. You play as Corporal Shelly Harrison, the head of the task force that enforces this kind of austere rule, and she is similar to Judge Dredd in that respect. When augmented cultists blow up a bar while Shelly is trying to have a drink, she vows revenge and exacts the law in an all-day, off-duty shift. These baddies are led by Dr. Jadus Heskel, and you will have to track him down so that you can put an end to the mayhem that is ravaging the streets and your fellow police force.

I vaguely recollected this character from her nickname "Bombshell." Turns out, Ion Fury is a prequel to the eponymously titled 2016 game, which was a commercial and critical bomb because of Shelly's over serious characterization and cringy dialogue. In this prequel, however, she is a brilliantly realized female version of Duke Nukem. Like that game, the witty one-liners and irreverent tone make up for an insubstantial story, and the same applies here. The banter exchanged with the mad scientist is pretty entertaining, too, but expect it to be the only narrative-driven element. That being said, do not play this if you are looking for a good plot, because there is but a dearth of it here.

With unmistakably antiquated shooting mechanics and design choices, you can tell you are playing a throwback. Consequently, everything here should fulfill the expectations of those well-versed in DOOM clones and the like. There are only a few things to keep in mind in this game: ammo, health, and maneuverability. This will help you in the sole form of progression, which is to get to the next level. That means no XP, upgrades, or anything of the sort - Ion Fury is a barebones game for better or worse. Personally, I strongly favor post-fifth generation gaming design tropes, although it was an unusual experience to play with no missions or markers. Using the map requires logic and memory to navigate the labyrinthian levels, so at least that was a welcome change. 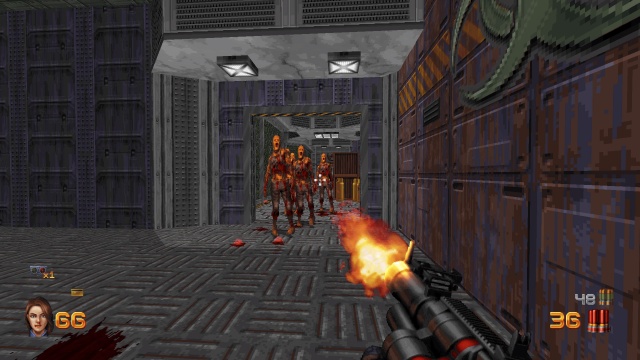 Line 'em up, shoot 'em down

There are eight weapons that you will eventually find throughout the campaign. Besides the different ammunition types, most guns are distinguishable by their secondary fire functions. The starting weapon, 'Loverboy,' is a revolver with a lock-on aim ability akin to McCree's Ultimate 'High Noon' from Overwatch. The 'Disperser,' on the other hand, is a shotgun with two modes that shoot slug bullets and launch grenades. Even the two throwable-types have alternate forms. The grenade-like 'Bowling Bomb' can be thrown in its normal state or with a timer, while the 'Clusterpuck' is like an impact-mine with two modes that prioritize damage and explosion radius. My favorite part of the arsenal was the 'Ion Bow' and its secondary charge ability, which fires multiple bolts in quick succession. This was so overpowered that it would obliterate any enemy within a few shots, most notably bosses.

I used the Ion Bow on bosses to quickly be rid of them as soon as possible. This is because the handful of singular battles you have is tired and unengaging. They are either giant mechs, medium-sized mechs, or another of Heskel's contraptions. No character or challenge can be found in these fights - you just circle around and shoot these faceless things until they explode. This is a real shame since the other enemy types are imaginative and intimidating. From the cybernetic flying 'Deacon' and flayed 'Skinjob' to the monstrous 'Wendigo' and arachnoid 'Mechsects,' these are fascinatingly disturbing designs, and some would have been perfectly suitable as bosses. 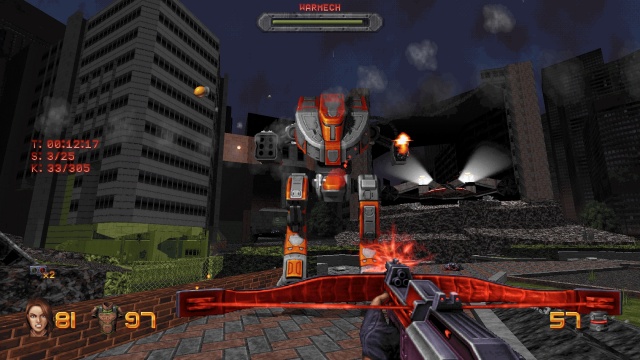 The environments are, for the most part, well-conceived too. This is set in a dystopian cyberpunk world, so there are some fascinating open urban areas in the first couple of chapters. Unfortunately, in the middle act, there is an abundance of sewer and factory zones that all become one muddy, industrialized blur. The convoluted layouts of the maps also reveal itself to be a significant flaw. Ion Fury expects you to kill every enemy in a warren of passageways for an extra reward and trophy/achievement at the end. I chose to do this initially, but it soon became infuriating and deferring to try and locate the last enemy lingering around. However, if you wish to do this, there is an in-game tracker that informs you of the number of enemies left.

Another element tracked in the 'Level Stats' is the crowning achievement of Ion Fury: 'Secrets.' These are hidden rooms that hold goodies and mysteries of all sorts. Firstly, they are an integral part of survival. Even if you are playing on the easiest of the four difficulties, you will need supplies and armor. These rooms can contain usable health kits, enemy GPS systems, and temporary power-ups that grant you an ability such as high jumps. The centerpiece of any individual zone, the 'Uber-secrets,' holds some of the grandest and most elaborate Easter eggs ever seen in a video game. You could spot a beautiful nod to Blade Runner on a rooftop, wear a hazmat suit to investigate the 'Elephant's Foot' caused by the Chernobyl disaster or experience a nightmare-inducing rendition of the Black Lodge from Twin Peaks. These alone are worth the price of admission - their execution, coupled with Bombshell's commentary, is brilliant. 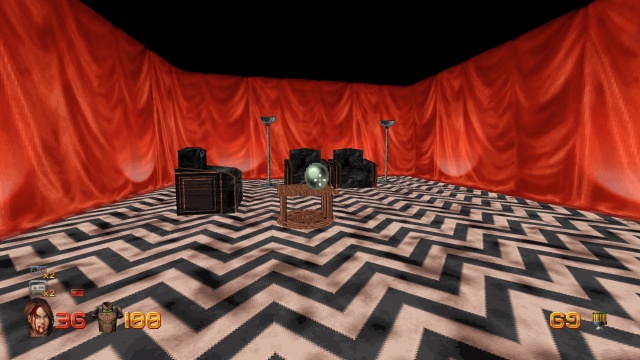 I heard that bubblegum you like is coming back in style

Ion Fury wears its clouded nostalgia lens and never takes them off. While newcomers to the 2.5D shooter sub-genre may be driven away, older gamers will adore this newest addition to the pantheon of great build engine games. With an electric drum 'n' bass score, some impressive cyberpunk locales, and some of the most memorable easter eggs I have come across, Ion Fury is a fast and furious shooter with a lot going for it.