If you've been keeping up with the announcements of the new characters from the past few months, you already know about the 12 new fighters included in Ultimate. The game now has a total of 51 playable fighters to choose from. Jill and Shuma-Gorath still count as downloadable fighters, so you'll have to download them still if you haven't yet while playing Marvel vs Capcom 3. Galactus is also playable in arcade mode. Each fighter now has a total of 6 palette swap outfits. The new fighters are:

Each of the new fighters is unique in their own way. Strider plays much like he did in MvC2, but he's still got several changes to make him fit in with the rest of the cast. Phoenix Wright is the most unique out of the new fighters. He has 3 modes of play - investigation, court and turnabout. He can find evidence in investigation mode and use useful evidence in court mode for extra attacks. When he collects three pieces of good evidence, he can hit his opponent with an "Objection!" attack then enter turnabout mode where he has powered attacks and the ability to use his level 3 Ace Attorney hyper combo.  He is truly one of the most unique characters out of the new characters. 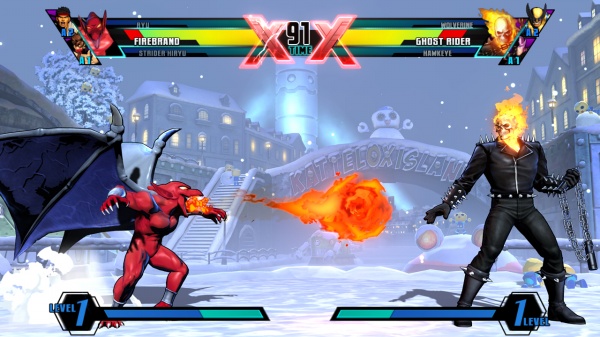 Vergil is Dante's brother from Devil May Cry 3. He fights similar to Dante with quick attacks, but Vergil can land attacks much faster. His attacks are usually split second and hard to see coming most of the time, unlike Dante. Frank West can level up his moves by taking snapshots of his opponents while fighting them. He can toss zombies at his opponents and use normal weapons and combo weapons from Dead Rising 2 to attack. Firebrand is the famous gargoyle from the Ghouls n' Ghosts series. He has several air moves and is a quick character on the ground or in the air. Nemesis is the T-type Tyrant from Resident Evil 3. He is much like Juggernaut in previous versus games - slow but very powerful!

Iron Fist has several close range attacks involving martial arts. He is probably the best ground character out of the new characters. Nova has several hard hitting moves and can juggle easily. He has beam hyper combos as well. Doctor Strange is heavy with projectile moves and tricking his opponent with projectiles. Ghost Rider can be great at a distance and from close range. He can attack from long distance with his chain whip. Hawkeye excels at keep away with his wide variety of arrows and evasive moves. Rocket Raccoon has traps that he can lay out and he is a good character for zoning and escaping attacks - Rocket Raccoon can literally burrow under the ground to avoid attacks.

Along with the new characters, the game now has 8 extra stages. There are several tweaks and added moves to the older fighters also. Many of the tweaks make the old cast seem different. Iron Man's uni-beam is much faster now and he can cancel his repulsor blast with the tap of the S button now instead of performing a motion along with S. Ryu has several new attacks - he has a rapid fireball and a charge fireball. He also has a sort of rage mode that can be activated to make his hyper combos more powerful for the duration of the mode.

Chris Redfield can now cancel his command gun attacks into special moves. This allows him juggle off the ground more often than before. Dante's alternate special moves can now be performed by simply tapping the button once again after performing the basic special moves. Thor's mighty spark has been made faster and his grab range for mighty punish and normal grab have been increased.

There are several other character changes as well. Some characters have been given boosts while other have been made weaker - for instance, Wolverine's diving kick will not knock the opponent back so he can knock his opponent into the air afterwards now. X-factor can now be performed in the air. A player can cancel a hyper combo in the air with X-factor and then add to the hits while still airborne.

The team aerial combo has some added changes also. A player can choose to take off more damage (up + S), take a level of super away from the opponent (forward + S) or gain a level of super (down + S) while performing the team aerial combo now. This helps out greatly for characters like Phoenix that depend greatly on their super bars (Dark Phoenix).

The online mode is basically the same as it was, but it now has an added spectator mode. The lack of a spectator mode was really the only flaw that stood out to me in the previous game, so this is good to see. A player can choose to watch fights while waiting in a lobby. The spectator mode can be turned on and off. A player can literally lurk in a lobby and just watch other players fight. Lobbies can still hold up to 8 players at once. 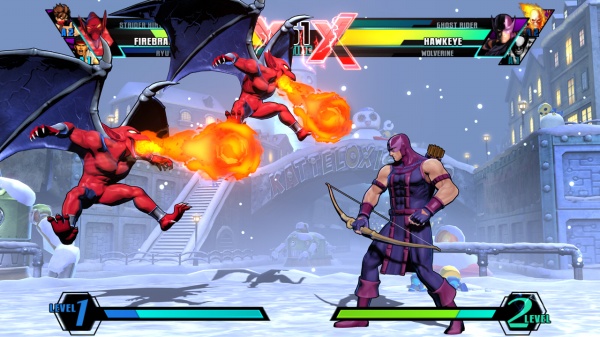 The game still has a mission mode along with the usual arcade mode and online mode. All missions have changed in mission mode. There are still only 10 missions per character, but that is quite a bit for 50 characters - 500 missions! The game has several extra downloads planned for it in the future - every character will have an extra downloadable outfit. The first package of downloadable outfits must be bought from the original MvC3 in order to use them in Ultimate.

The only flaws that this game might carry to me would be the unbalanced characters that might be more obvious as the game continues to be played. It's hard to tell when a character has much more advantage than others early on when the game first releases. If I would have seen some of the unbalanced issues in the original MvC3 ahead of time, I would have noted them in my previous review. As of now, with Ultimate, Wesker seems to be a very annoying character with his added damage and speed boost that he can gain through damaging his opponent. Other than that, the characters seem much more balanced in Ultimate when compared to the original MvC3. Even with the possible issues, a player can learn to adapt and deal with them, I feel - that's part of the mentality behind a fighting game anyway.

Final Rating: 97%. With 12 new fighters and tons of extras along with several tweaks to existing fighters Ultimate Marvel VS Capcom 3 is quite a value for $40!