The original Age of Wonders was something of a cult classic. It didn't set any sales records, but it did quietly develop a loyal following of gamers attracted to its great gameplay and strategic depth.  Now the game's sequel, Age of Wonders II: The Wizard's Throne, has arrived, adding new features to the game while trying to preserve the elements that made the original so enjoyable.

If you played Age of Wonders, then I'll just tell you right now that you will undoubtedly enjoy the sequel.  The gameplay has remained essentially true to the original, with some enhancements and graphical improvements, as well as new units and spells.  If you are new to the series, don't worry; Age of Wonders II stands on its own and you won't be confused or at any disadvantage if you missed the first game. 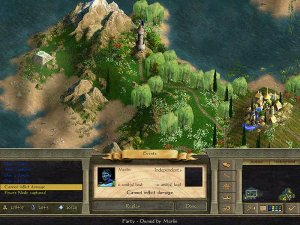 At its core, Age of Wonders II is a turn-based game set in a high fantasy world.  Play takes place on colorful, animated maps which are home to cities, income and mana producing points, dungeons and ruins, and an assortment of wandering monsters.  Many maps also feature a subterranean level as well, effectively doubling the size of the maps and providing you with a potential way to sneak up on less vigilant opponents.  As in most strategy games, control of the cities and income points is critical to success, as units are created in the cities and bought with gold from the income producers.

At the center of your forces is your wizard - you only get one and if he or she dies you are out of the game.  Your wizard will be your most powerful unit, capable of casting powerful spells and summoning creatures to fight for your cause.  You'll need to carefully balance your desire to use the powerful wizard in important battles with your need to keep him or her alive.  The game does provide three things that will allow you to keep your wizard out of harm's way while still utilizing his or her powers.  The first is the wizard's tower structure that can be built in cities.  When the wizard occupies a city with a tower, he has the ability to cast spells over a wide area centered on the tower.  The towers can also be upgraded themselves, further increasing the range.  Secondly, there are special magic structures which will extend your wizard's domain when they are captured.  Finally, there are heroes.

Heroes are not very common units, but when you have the opportunity to recruit one, you should take it.  The heroes themselves are powerful combat units, but they also have additional assets.  Heroes extend a small radius of power around themselves in which your wizard can cast spells, so they automatically are backed by the power of your wizard.  Heroes can also carry magical weapons, armor, and artifacts, further increasing their effectiveness.  Lastly, heroes can gain levels with combat experience, gaining better combat or other special abilities as they level up.

The main way that you will expand your influence and capture more cities and structures is through your armies.  Armies consist of groups of one to eight units that are created in your cities or recruited from neutral camps.  Age of Wonders II features over 130 different units drawn from 12 different races.  Building armies of the right mix of units is critical and requires some strategic thought - an army of 8 human knight units is quite strong, but can be helpless against an army consisting of all flying units.  Despite the 8 unit limit, battles can be a lot larger and involve far more units because any units adjacent to the attacking and defending armies are drawn into the battle as well.

Once a battle ensues, you have the option of controlling it directly or letting the computer resolve it for you.  The computer does a pretty good job with the battles on its own - you can feel safe letting the computer resolve your battles while you concentrate on the overall strategic side of the game, safe in the knowledge that the computer won't ineptly lose your armies for you.  Should you want to control the battles yourself, play will move to a tactical map featuring the terrain of the battle site and the opposing units lined up for battle.  Play proceeds in a turn-based manner, with each unit having the opportunity to move in turn until all units on a side have completed their move.  The huge variety of units available in the game makes for a large number of tactical approaches to the battles, as you'll have melee, ranged, and magical units to contend with, as well as your and your opponent's wizard's spell books.  The AI is a very competent opponent in battle mode, so don't think that you will win a lot more often just because you take control of the battles yourself.