Borderlands 3 begins where it all began, Pandora. Pandora is a planet created by an alien race, Eridians. The planet is actually a vault to keep another alien being called The Destroyer imprisoned. You are quickly recruited by Lilith who is a powerful Siren (warriors with elemental powers), leader of the Crimson Raiders, and savior of Pandora. She is seeking your help and anyone else to find the Eridian alien treasure that forms a key to unlock "The Great Vault" before the Children of the Vault, Tyreen and Troy find it first. Tyreen and Troy are Siren siblings looking to absorb the powers that reside in the vaults across borderlands. The Eridian treasure they are looking for forms a key which leads to other vaults and ultimately to "The Great Vault". Per usual, an enemy looking to be the most powerful force in the galaxy. While other Borderlands games take place on one world, Pandora, Borderlands 3 expands to three others, Promethia, Eden-6, and Athenas. Each world has a number of zones you fight your way through while being introduced to a number of new characters willing to help your cause, although they also have their own agenda that you must help them with first. You pick up the majority of your crew on Pandora and they join you on your ship, Sanctuary III that you use to traverse the galaxy in search of the vault keys. The crew will provide their special services not only on the ship, but on each planet as well. Those services include healthcare, weaponry, vehicles, cosmetics, laughter, and insight in their background stories. 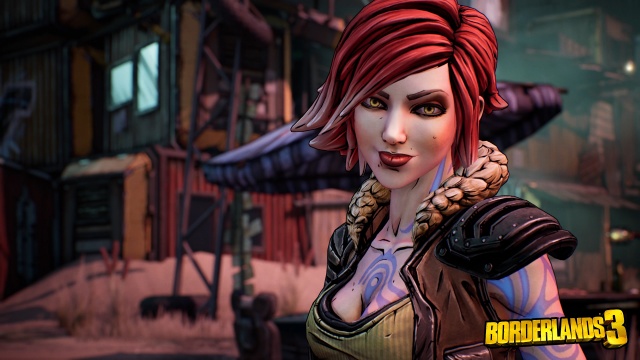 In typical Borderlands fashion you get to choose from varying classes of heroes. I chose Moze which is a gunner class. There is also Fl4k a robot beastmaster, Amara a Siren warrior, and Zane who specializes in gadgets for arsenal. While leveling your character you will have access to three skill trees to put points into. Each tree has a number of action skills, augments, and passive abilities to evolve your gameplay and make you a stronger foe for anyone that stands in your way. Each skill tree also has special primary abilities to activate during combat. Moze for example has access to a mech that is outfitted with a grenade launcher, railgun, or a mini gun. You can choose two to start with and two secondary abilities at a higher level. As mentioned, some of the skills are directly related to the weapon abilities you chose or they enhance your normal arsenal, health, or shields. There are obviously several possibilities for class builds to evolve your character into. Want to try a different combination of skills or completely different weapon abilities? Find a respec station and for a small fee you can let your creativity run wild. For the Moze I ended up using the railgun and mini gun. When activated you hop into a mech and feel nearly invincible while mowing down enemies in the blink of an eye using the railgun and melting faces with the mini gun. You can even use both weapons at the same time, though the railgun does have a timed trigger and the mini gun will overheat. The use of these abilities is timed, but you just have to wait a while for it to become active again. You can however select attributes in your respective skill trees to extend the usage of your weaponry if you wish.

Leveling in Borderlands 3 is essentially natural progression with the main story and side quests you encounter while roaming the planets on your main questline. Early on most aren't necessary. Don't feel bad if you don't complete them all, once you get your Sanctuary III ship you can always come back later. There will come a time once in a while where you may need to work on some of the side quests to level-up to around the same level as the main quests. Though with the weapons I had equipped I could easily take on enemies two levels higher than me with extra care, and if playing with friends (yes, there is co-op) it would be even easier. In order to keep track of your quests and progress you are given an ECHO3. The ECHO3 looks like an old cassette player (look it up millennials) but is so much more. It is your hub for quests, side quests, inventory, logs, challenges, and map. The coolest feature about the ECHO3 is if you are no longer in the vicinity of the person you are talking to the ECHO3 will continue their dialog - a small but notable detail as this allows you to continue progressing or exploring while still getting the oh so important storyline. There are surprisingly a lot of games that force you to hang back and listen or if you dare to walk away the dialog sound will eventually fade away in the distance. However, there are a couple of drawbacks. I want to find the designers of the ECHO because why would you allow me to press "M" for the map and not press again to exit? Instead, you have to press tab to cancel as it is the universal button to back out of anything in game but wouldn't it be more obvious to just press "M" again? Also, don't think about opening the device when jumping or in the air, it isn't accessible. I guess that makes some sense as your character does pull it out when you activate it but I can see easily pulling it out after jumping. Definitely not game-breaking, but to this day I still press "M" multiple times to try and get out of the map. Old dog, new tricks? I think not! 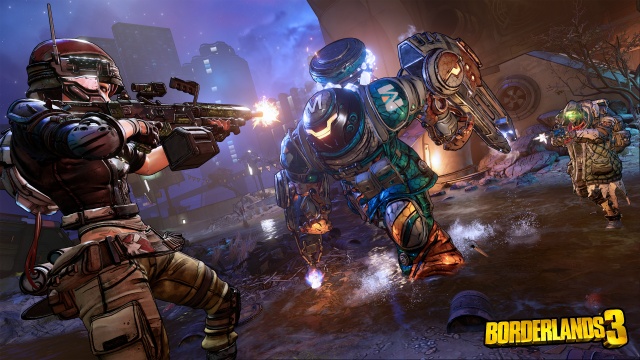 For me the best part of Borderlands 3 is the presentation. The cel-shaded art style is out of this world. Cel-shaded can be very simplistic and yet Borderlands 3 takes it from simplistic to artistic. It's almost hard to explain because there is so much on the screen it is hard to focus on one thing. Character design to the nines with a ton of skins to unlock and collect to weapons that all look futuristic and real to the touch. If you have the computer rig to run it there are even lighting effects and reflections that are the cherry on top. I swear the devs put explosive barrels all around the planets inviting you to shoot them and watch the fireworks fly. There are even enemies with elemental abilities that have an area effect that I always hesitate to kill just so I can see them in all their glory. Second, the soundtrack is on point with every situation you get your character into and can get really intense. It simply puts you in the mood for 24/7 chaos and destruction and is some of the best I have heard, 'nuff said. For others the best part will probably be the endless grind of weapons. There are a lot, almost too much to the point where I actually don't like it. It pours loot and you are constantly in a struggle to choose what to keep, what to leave behind, and what to sell. Don't get used to the weapons you are having now as you will be swapping them out frequently, which is a mental issue for me to overcome. To some, it is the discovery of the perfect combination and you'll always have the chance to improve their damage by even the slightest percentage. I like to settle in with what I have and be rewarded at the appropriate time with the occasional surprise to feel overpowered at times. Also, for the collectors there are a number of cosmetics for nearly everything you have at your disposal. There are skins for your character, weapons, and vehicles, even for your ECHO. You can even have little charms for your weapons. These skins are typically random drops but there are also vendors where you can buy them as well. I personally have no interest in skins but I do admit that they are unique and generally have a theme to stick to versus a random collection of glitz.

So what is there to do after you save the galaxy once again? I personally don't mind finishing a campaign and putting a game away, but most gamers these days want more of what is called an endgame. Borderlands 3 does have a new game plus which allows you to keep your skills unlocked in your skill tree and continue leveling, but also allows you to go back and complete your side quests. You'll also have access to Mayhem Modes 1,2,3 which will make the enemies harder and increase the amount of loot dropped by enemies. The kicker, there are modifiers that can be beneficial such as increased weapon damage or a negative effect like lower shield regen and increased enemy fire rate. Again, I am not all into the overall grind aspect but gamers do like to be constantly challenged and will enjoy perfecting their weapon skills. The question is, if you aren't already a fan of the Borderlands "stinky cheese" vibe will you take a chance, pinch your nose and take a bite? I myself had a ton of fun blasting my way through the galaxy, laughing at the corny jokes, and enjoying the funk.