Jane's Attack Squadron is a flight simulator set in Western Europe during the Second World War, from 1943 through 1945.  You'll have the opportunity to fly 14 different planes from both sides of the conflict.  In addition to fighters such as FW-190s, Mustangs, and Spitfires, you'll also have the opportunity to try your hand at flying bombers such as the Ju.88 and B-17. 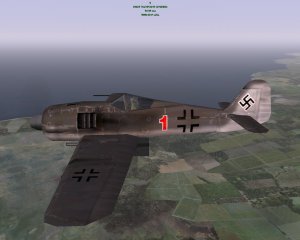 The planes in Attack Squadron are pretty simple to fly as the game has a forgiving flight model.  When taking off, most planes practically lift themselves off the ground.  Whether at the controls of a nimble fighter or lumbering bomber, stalls are rare and hard to come by.  The game does feature some realism settings, but the effect of turning them all on is not a drastic one.  While this is not a very good thing for the hard-core sim crowd, it is not necessarily a bad one for those new to flight sims or those who want an easy to fly experience.

In fact, you don't have to do much flying at all - autopilot and nav point warping get you into the middle of the action with having to bother with the "getting there and back."  Should you decide to do a little more flying, navigation is easy with waypoints appearing as green circles in the sky.  These waypoint circles are especially helpful when flying German planes, since the instruments give readings in meters but the altitude and of and distance to the nav points is always in feet and miles.

There are several in-game aids to assist casual and beginning players even further.  Targeting aids such as a lead indicator, an enemy-tracking camera window, and aircraft identification and location markers.  All of these things may make hardcore sim jocks roll their eyes, but they're a big help to those just interested in making a few aerial kills.

Despite all of these aids for new players, the game drops the ball when it comes to the manual and tutorial.  The included manual is quite thin for a flight sim, and the supplemental manual that is included in a pdf file is not that much more help.  The tutorials present the steps of the lesson as mission objectives, and then leave you on your own.  It is hard to learn how to play a game when you need to continually pause it, check the objectives, and then try to perform the next step.

The aerial combat in Jane's is enjoyable - the AI is a competent opponent, almost too competent in the case of bomber gunners.  Speaking of bomber gunners, when flying a bomber, you can man any of the guns yourself.  Manning the gun turrets can be a lot of fun, as you knock fighters that come at your bomber out of the sky.

The game does have a location-based damage model, and will let you know where you've been hit.  Even without the damage warnings, you could see the damage to your plane, be it bullet holes or a torn rudder.  Depending on where the damage occurred, it will also have an effect on your plane's handling and a few well-placed shots will have you struggling to keep your plane under control.