Saddle up, cowboys and girls! It's time we put on our chaps, grabbed our favorite pistol, picked up a horse and rode out into the sunset of Westerado to solve our life's biggest mystery...who killed our mother and brother?

I have to say even before playing this game I had been lassoed into eagerly wanting to play it. The Western genre gets my attention every time whether it be a video game, movie, or television show. Combined with retro 8-bit graphics my brain instantly triggered childhood memories of me dressing up in cowboy outfit and shooting off my period replica cap pistol. I had been chomping at the bit so hard it could shatter. Granted Westerado had been a flash game available on Adult Swim's website I had never seen anything about it until it had become available on Steam as "Westerado: Double Barreled", a refined version with some additional content, achievements, and of course a larger audience. I had Westerado in my sights and I already knew I was going to love it.

Westerado reminded me quite early on of the Dark Souls series. Meaning the plot is thin but just enough to peak your interest, not much guidance is given to you, what happens no matter the outcome is permanent, some self-exploration, high depth of content. The comparison isn't a bad sign at all; I rather enjoy such characteristics in a game. Westerado is by no means as harsh as a Souls game and is way more casual and easily enjoyable. Let's just say I didn't have as many mood swings or curse words come out of my mouth while playing. 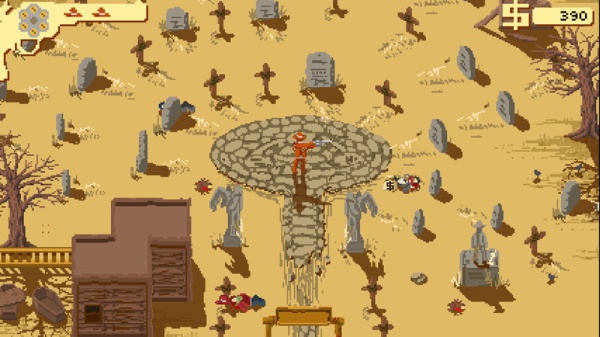 Your character has no name, but is referred to as Brother early on. Your family lives on a ranch and you are sent out to help your brother round up the buffalo. One of those buffalo escapes and by the time you are back from rounding it up you can see the ranch is on fire and in ruin. Your brother has been shot and mortally wounded, but before he dies he tells you about the person who has killed your mother. Out for vengeance you visit your uncle, who is also uniquely named Uncle, and he guides you to the next town, Clintville, where your true journey begins. While in Clintville you will encounter a few more main characters that will basically refuse to give you information on the person who killed your family until you help them. The good ole help me, help you, scratch my back, I'll scratch yours routine. That's all fine and dandy, fits well into the Western theme of everyone looking out for themselves as their top priority. Complete the quests and you will usually be rewarded with cash or a clue which is entered so kindly into a logbook. Peering into that logbook will show you a map of where you have been and where your quest interests are, details of your existing quests, outstanding bounties which you can kill or capture for reputation or money, and most importantly the description and picture of the murderer. This picture cycles through all the color and clothing options available in the game and is narrowed down the more clues you obtain. For example, if someone tells you the murderer wears a top hat and you also know it is black, then the hat will stop cycling through options and remain static. Of course just knowing the hat and color doesn't narrow down your search much, so march forth to help more people and gain more clues. Even after gathering enough information that doesn't give you the whereabouts of the murderer. There are many obstacles in your way until you discover your enemy and that's the fun of it all. 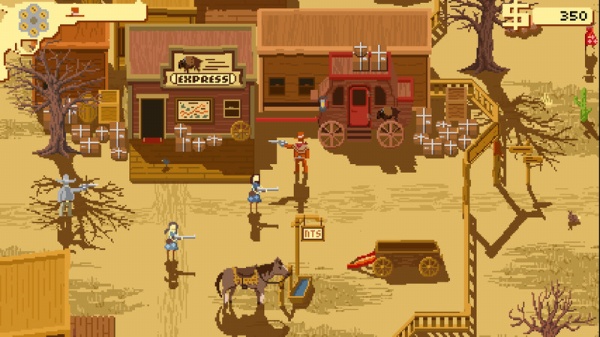 Aside from playing detective and finding the murderer there are many plotlines throughout your journey. Quests range from helping the local sheriff who is a coward, getting involved in a relationship, killing bandits for reward money, settling an altercation between the military and the Indians, investigating a railroad issue, traversing mine shafts, escorting the Buffalo Express carrying goods to the next town, helping local ranchers fend off the oil tycoon, to, heck, even helping the oil tycoon. All of these encounters are spread throughout the map which has two levels. One is the mainland, mountains, forest, and desert to the second level which is the underground mineshaft, and you will frequent these environments often. Luckily, the traveling system is spot on. Most quests will take you to your next destination automatically while others do require some exploration. Once you have visited a major area there will be a horse that can be used in between those larger areas making travel almost instantaneous. The best part about these quests is that most of them can be completed in multiple ways and sometimes will be failed with permanent results. I will admit defeat on some of them, although it didn't seem to take away from completing the game. Though some of the quest results are achievement-driven, making the game's replay value rather high. I actually found myself enjoying the journey through the side quests and not caring as much for finding my family's murderer, but once I did get enough clues I buckled down and got back to business. 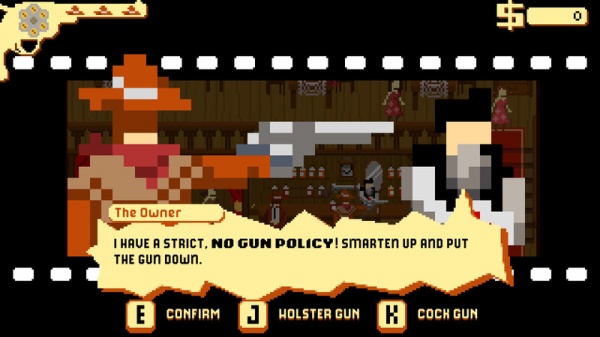 You might think to yourself how detailed can this game really be when using 8-bit retro style? The answer is simple: a lot! The environment is rather small after you reach all the traveling checkpoints, but the amount of plot depth and character detail put into the game really makes it engaging and immersive. The graphics are subtle, but pay close attention and there are minor differences even down to the color, size, and shape of the belt buckles. There are even a variety of hats, clothes, and guns for your character to receive as rewards or even purchase. Walk into a saloon and play poker, and lose...a lot. I swear one of them is cheating! You can talk to everyone though some characters do repeat others. The point is you don't really know who will have a quest for you to complete or a clue to give making you want to encounter with everything. So many things intertwine with each other and can impact the results, that it makes the game thrilling. The best part of all is the soundtrack. Each situation and environment has a different beat and tempo which keeps things fresh and unique. Even my wife thought the music was catchy and hated when I would leave town or even knew without even looking that I was in a saloon when the piano was playing. All the large and small details appropriately woven together makes for a great game.

Westerado manages to combine the good, the bad, and the ugly in one spectacular game that provides depth and entertainment in a small package rivaling even the major A list developers. The only downside is that it is very short, but it's one of the best games I have played so far this year. Westerado is a rare breed of game that reaches into your inner child and brings the Wild West to life.

Final Rating: 89% - It brings out the inner cowboy in all of us.