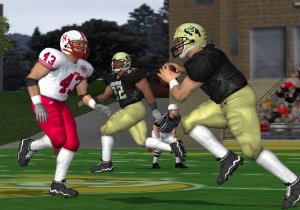 The usual bane of video football games is the announcers.  Far too often they have such a limited pool of comments that by your second game you've heard it all, and by your third you never want to hear it again.  Or you'll hear comments that seem to be completely random or inappropriate, which always seem to give you a little jolt of reality in the middle of your game playing fantasy.  NCAA Football 2003 doesn't suffer these problems.  It features a broadcasting team made up of Nessler, Herbstreit, and Corso, that has a very large repertoire of sayings and analysis.  Of course you will hear things repeated, but it doesn't ever feel like you just heard the same thing a couple of minutes ago.  Most of the time the commentary is dead on, but on occasion you will hear a play call lambasted by the announcers when it was actually the right thing to do strategically.  Although not quite perfect, the play calling in NCAA Football 2003 is some of the best you'll hear in a video football game.

The game's on field graphics look great.  You'll see expressions on the players' faces, reflections in their helmets, and dirt on their uniforms.  The motion of the players is smooth and realistic, as is the movement of the cheerleaders and mascots.  The crowds appear a little flat and fuzzy though, for those of you that like looking at the crowds in football games.

As for control, it is fluid and precise.  You'll never feel that you bungled a play because you lost a fight with the controller.  There is one complaint with the control scheme, though.  The sprint button is different when playing on offense and defense, and this takes a little getting used to.  You might have to put up with unintentional spin moves on offense or unplanned player switches on defense when you first start playing the game.

In The End, This Game Hath Been Rated: 94%.  If you're a college football fan, you can't go wrong with this game - you'll love it.  Even if you just like football, it packs in so much great gameplay that it will be a long time before you tire of the game.