Tom Clancy's Splinter Cell is an upcoming stealth action game that puts you in the role of Sam Fisher, a shadow operative working for Third Echelon, a secret sub-agency of the NSA that officially does not exist.  As a shadow operative for this organization, you are a Splinter Cell,  an operative granted the use of the Fifth Freedom.  The Fifth Freedom gives you full latitude to act alone and use whatever means necessary to take out threats to the US.  You operate in the heart of hostile territory, and use the terrorists' own tactics against them.  You are free to spy, steal, kill, and destroy, as long as you do it unseen and avoid capture.  Should you be captured or killed, the US government will deny all knowledge of your existence. 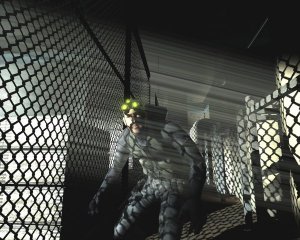 In Tom Clancy's Splinter Cell, you are sent on a mission to investigate the disappearance of  two CIA agents in the former Soviet republic of Georgia.  This is not a situation that can be handled through diplomatic channels, and it is up to you to rescue them.  You'll soon find that the agents' disappearance is part of a far deeper conspiracy, one that is designed to destabilize the world and push it into nuclear conflict.  The game's storyline is completely original, and has been endorsed by Tom Clancy himself.  This means that you can expect the plot to be both suspenseful and frighteningly plausible.

To complete your mission you will have the latest in high-tech weaponry and gadgets.  You wear night and thermal vision goggles that can be activated at the flip of a switch.  You'll carry advance surveillance gear like a scope that can slip under a door and let you get a look at what's on the other side.  You'll also be able to use prototype weaponry that won't make it into the regular army's arsenal for years to come.

The game will also give you a wide array of stealth techniques to help you infiltrate the enemy's installations.  In addition to such 'traditional' techniques as sniping and holding a gun to a person's head, you'll be able to rappel, zip line, and split jump, to name a few. 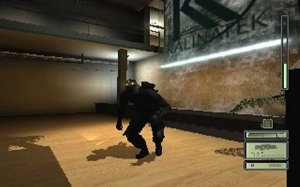 Ubi Soft recently sent us a demo of the game that allowed us to try out the game's first level for ourselves.  The first thing that jumps out at you is the realism of the game's environment.  You begin in a courtyard outside of a building that you must infiltrate.  The wind whips around the courtyard, sending leaves and papers flying about.  Light from the street filters through a lattice, casting a pattern of shadows across the ground.  Once inside the facility, you can see the play of lights and shadows created by doors and windows.  A lab features hanging translucent plastic room dividers, the type cut into strips to allow people to pass through.  As you move though the divider, the slats jostle around you and against each other, swinging more and more slowly until they finally come to a rest.  Once behind the divider, you can look through it for a hazy and distorted view of the room that is akin to what you can see through a shower door or curtain.  The incredible detail and lighting effects in the demo really bring the game to life, and left us hungry to see more of what the game will offer in later levels.

As you stick to the shadows and try to move undetected, you must pay careful attention to audio clues - not just the sound made by your enemies, but by you as well.  Enemies can hear your approach if you are not careful, and will rush to investigate or raise an alarm.  Plan your approach carefully, and you can grab your enemy from behind without them ever suspecting that you are there.  This is a good way to interrogate civilians or noiselessly eliminate threats.

We don't want to reveal any more about the demo since it would spoil the plot for you.  We will tell you that Tom Clancy's Splinter Cell looks to be the most realistic stealth action game to ever hit video game consoles, and one that will use the full power of the Xbox's graphics and audio hardware.  This game has all the earmarks of a game of the year candidate, and should be at the top of Xbox owners' holiday lists this season.  Tom Clancy's Splinter Cell will be available on November 12th.  A PC version will follow two weeks later.