You would have a tough time making the argument that High Moon Studios' Transformers: War for Cybertron isn't the best Autobot v. Decepticon game ever created. The third-person shooter perfectly captured the spirit of the robots in disguise, and better, gave us a window into the start of the eons-old Cybertronian grudge match. After the first game blew our collective minds, it was only a matter of time before people started wishing for a sequel. Thankfully, Activision and High Moon Studios have big things planned for this fall's Transformers: Fall of Cybertron, and The Gamers' Temple got a chance to see just how things are progressing. Once this hits stores later this year, it's safe to say that gamers everywhere will simultaneously hear the "Transformers noise" as they soil their shorts. For Transformers fans and non-fans alike, Fall of Cybertron is shaping up to be one of 2012's biggest and best.

If you played War for Cybertron, you know things didn't really end on a happy note for the Autobots. The situation doesn't get better for the sequel, which sees Optimus Prime, the Autobot leader, faced with an impossible choice: Use his remaining power to hold off the Decipticons for just one more day? Or drop his defenses in favor of a daring escape from a Decepticon-controlled planet? This struggle will form the backbone for the game's entire storyline, which will have players jumping back and forth between playable Autobots and Decepticons. And how will it all end? All I can say is that for Transformers nerds (like me), the tale wraps up in a very familiar place. You'll have to play the game to see this little surprise for yourself.

Matt Teiger, game director for both War for and Fall of Cybertron, took us through some segments of the single player campaign to emphasize whats new, whats old, whats changed and one absolutely awesome new character that literally changes the entire game. After the first game shipped, Teiger and his team took a look at what people like and didn't, and they came up with three main complaints. "The environments got visually repetitive, the gameplay got repetitive and where's the f-ing ammo?!," Teiger said. This time through, they've made the ammo much more plentiful. Their main goal, though, was to turn the first game's gripes into the sequel's biggest selling points. And they may just have succeeded.

The repetition certainly seems to have been eliminated judging by the handful of different levels and playable characters we saw. The first segment we were shown featured Vortex, a flying Decepticon. Evident was the ease in transforming from vehicle to robot and back as Vortex hopped, flew and strafed a gigantic Autobot gun emplacement. Another showed us Optimus Prime in action, with the stories-tall Transformer Metroplex laying waste to Decepticon forces in the fore and background. As cool as it sounds, it's actually even cooler; you actually have control over Metroplex's actions using the d-pad. The symphony of destruction in the enormous Autobot's wake looks both beautiful and terrifying, one of those things you kind of need to see for yourself. 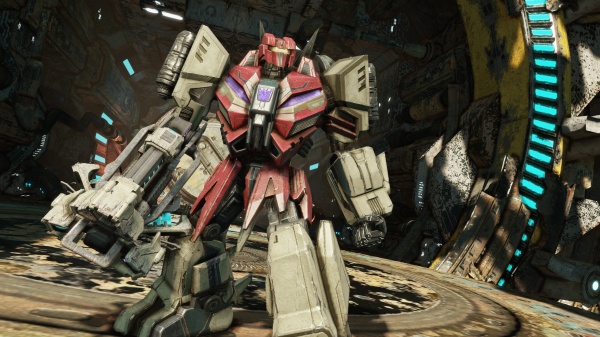 Out of all the new additions and tweaks, Fall of Cybertron's most alluring selling point is the inclusion of the Autobot Grimlock, who Teiger describes as, "A f-ing space T-Rex that shoots fire." Personally, I can't think of any higher endorsement than that. What makes Grimlock especially entertaining is his fighting style. You won't be using any guns when you are Grimlock; instead, you'll be chaining together combos with the Autobot's sword and shield, Darksiders-style. Vanquishing enough enemies fills a "rage meter," and activating it turns Grimlock into his famed fire-breathing T-Rex. The camera swings in a bit closer, and you've got until the meter runs out to cleanse the Decepticon-controlled Cybertron with fire. Even though Teiger and his team are working to make repetition (or lack thereof) Fall of Cybertron's strongest point, Grimlock absolutely steals the show.

We also got a quick look at the planned multiplayer aspect of the game. No actual gameplay was shown, but the new create-a-Transformer mode looked to be coming along nicely. The amount of options is staggering, enough that no two Transformers will look the same. It will definitely be interesting to see what High Moon does with the final product, because I could see fans going bonkers for just what they've got now.

Even though its still a few months out, Transformers: Fall of Cybertron needs to be on your radar. Things are looking to be an improvement on the first in a good number of ways, and the amazing Grimlock will have people talking for weeks. Keep an eye on The Gamers' Temple for more coverage of this amazing game as it inches ever closer to release this fall.

All Transformers: Fall of Cybertron previews