Ultimate Fighting Championship. The sport in which two men enter an octagon cage and proceed to mercilessly wail on each other until one can no longer fight. Sounds brutal, right? It is. And definitely not for the weak of heart. But, as with any sport of varying brutality, you can bet there will be a video game about it. THQ, the veteran developer behind the previous UFC titles, is about to bring us another game featuring all the submissions, knock-outs and, well, bloodspray of the extreme sport, and we had a chance to sit down with a final build of the title. What we found in UFC Undisputed 3 was an extremely sophisticated fighter that, whether or not you can stomach the real thing, promises to be one of the most technical and competitive games ever made.

Before we get to that, though, we need to discuss how this game looks. I know, graphics aren't everything, right? But here, THQ has come up with something really special. You won't need a background on the sport to realize that the in-game fighters are real human beings; they really do look that good. And the fighter models, as well done as they are, aren't nearly as impressive as as the little touches; flying mouth guards, realistic damage and even spit and sweat beads round out the game's visual palate. The sweet stuff doesn't end there, either. UFC created and edited tons of video footage for the game, and peppering it throughout the career and exhibition modes serves to draw the player even further into the experience. UFC may not be a pretty all the time, but the game based on it is simply beautiful. 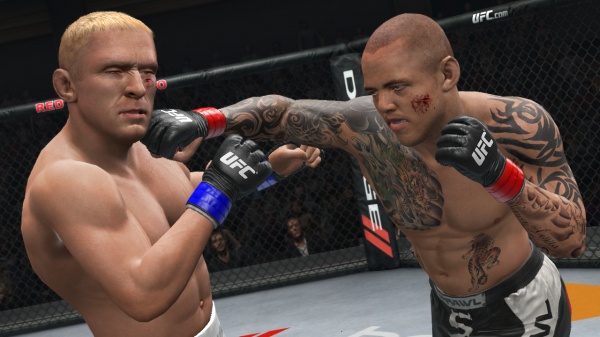 So it looks good. How does it play? UFC Undisputed 3 is extremely simple to learn, but wildly difficult to master. The fights and moves available quickly become intricate chess matches between skilled players, but novices can still get the full experience by button mashing away. Like Virtua Fighter or Starcraft before it, UFC Undisputed 3 looks to be one of those games that is technical enough to become a competitive sport, so let's break things down, mode by mode, so you know just what you'll be getting into upon the game's release.

Let's start with career mode, the first of a few we got to test out. This mode allows players to create a UFC fighter from scratch, and then follow that fighter from his first entrance into the octagon to all the glory and pain that follows. The character creation system is among the most full featured I've seen, but it isn't complicated enough to make using it a chore. Rather than relying on a few preset faces to offset the inhuman monsters some of us may create, THQ has implemented a circular, rotating preset for some of the major creation options (head shape, size and appearance, body height and weight, etc.), and pointing the analog stick in any direction will yield a perfectly acceptable looking fighter. Rotate that dial and you'll see the choices morph in real time, which ends up looking like the end of the Michael Jackson "Black or White" music video. It's an ingenious approach; it makes customizing your fighter to your exact specifications much easier and faster than it would be in other games' character creation modes. It also ensures all custom fighters, no matter how unusual, look just as amazing in-game as the ones modeled after actual UFC greats. I was able to create a pixel perfect version of myself (minus the Dragonball tattoos and plus a LOT of muscle) in just about five minutes, and who doesn't want to fight as themselves?

Being able to make your fighter look just how you'd like is just the first step THQ has taken in making the career a totally immersive, and too-realistic experience. Every aspect of the UFC experience has been slavishly recreated for this game, and the attention to detail oozes out of every corner (no pun intended). As you work your way through, you'll train, learn and level up your moves, sign sponsors, win fights, lose fights and even end up on the cover of a magazine! Previously mentioned exclusive highlight reels and fighter interviews jazz the experience up even more, and the overall feel of the game becomes akin to watching UFC on TV - only you're in control. 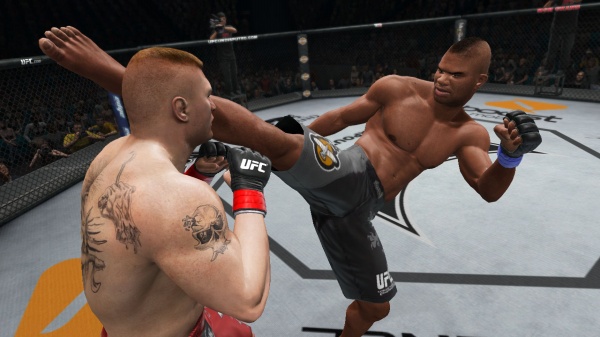 The very best aspect of the career mode is the way it forces some give and take on how you proceed, and how despite that, you're always moving forward. I'll explain: When you agree to fight an opponent, that's just the start. You'll have a few things to accomplish before you climb into the ring. You can train to build stats (don't worry, guys; the training games aren't as boring as they were in UFC 2010), learn or level up moves or even set a game plan for the next fight. The catch is that you only get one or two actions before a fight, so you'll need to think critically about what is most important going forward. Should you raise your base stats and stick with the moves you've got? Learn some new ones? It incorporates a level of strategy, but more importantly, it fuels the feeling that no matter what, you are always building toward the next level. Even losses hold benefits here, and the constant forward motion is enough to hook any gamer, UFC fan or not.

Another mode that caught our eye allows players to re-fight some of the most famous UFC matches to date. The experience is brilliant for a few reasons. First, it can teach A TON to new fans, as each fight is set up by a video featuring "Fight Professor" Stephen Quadros. He explains the lead up to and the circumstances behind the original match, and even though it's just commentary, it's really sets things up nicely for the fight ahead. Second, THQ has built little achievements into each fight, giving you more to shoot for than just a win. For example, in the match between Wanderlei Silva and Quinton "Rampage" Jackson, the game tasks you to go the whole round without being taken down, to land a certain number of hits in a certain time, you get the idea. These little goals are totally optional, of course, and really do add a lot of replay to what is essentially an exhibition mode. Only a handful of these fantasy fights were available for us to test out, but it looks like there will be tons more on the way in the form of DLC. Personally, I enjoyed this mode equally as much as the meat-and-potatoes career; it filled out my somewhat limited background on the sport, and it had me fighting over and over in the quest for just one more achievement.

One of the highly touted additions to this year's game is Pride mode. For those that don't know, Pride is a now-defunct Japanese fighting league, much like the UFC (who eventually bought the rights to Pride and welcomed all the fighters into their fold). The main differences between the two come in presentation and fight rules. In UFC, fighters do battle in an octagon ring, and knees and kicks to the face of a downed opponent are a strict no-no. In Pride, fighters square off in a four-sided, blindingly white ring, throbbing Japanese techno is omnipresent and that stuff about kicks and knees? Totally legal here. The differences between the two fight styles are few but substantial, and it's essentially like getting two games for the price of one. I found Pride mode a little more conducive to my traditional fighting game experience, but the technical brilliance of the UFC fighting is every bit as present in these bouts. Make sure to keep your eyes open for the character models in Pride; against the stark white backdrop, these guys look so vividly real in HD you could swear they are about to hop off the screen into your living room. 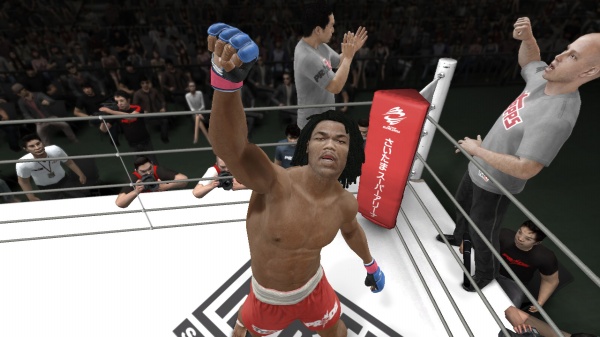 Which brings us to the multiplayer. While we didn't have access to the game's promised online modes and DLC, THQ allowed us to play local multiplayer for quite awhile and what we saw had us wanting more. Like I said before, watching two skilled players fight is like that scene from "The Seventh Seal," but my fights, somehow, looked almost as intense, a testament to the game's accessibility. After just an afternoon of training, first as my created fighter, then as Quinton Jackson, I was able to at least be a match for some of the more skilled players. We are very excited at the prospect of taking the multiplayer experience out for a spin when the game comes to stores, and if local multiplayer was any indication, it's going to be hours of face-punching fun.

We came away very impressed with what THQ has done with UFC Undisputed 3. UFC 2010 rankled some fans with less emphasis on the fights and more on the (boring) training, but this looks to be the UFC game fans have been waiting for. Every single last aspect of the sport covered in intricate detail here, and on top of that, it manages to be a very deep fighter that will please even the snobbiest of fighting game gurus. Keep an eye on this site as the game approaches its February 14 U.S. release date for our full review.