Things sucked in the New York City of Prototype. No, not the game! It was actually rather fun, despite nearly everyone (ugh, myself included now) comparing it to the far-superior PS3-exclusive Infamous. What sucked in open world action game's version of the Big Apple was the incredible bleakness of the world itself, and the anti-hero players' assumed control of, Alex Mercer, was no peach. Every last second of Mercer's story was deeply disturbing and even after the blood-soaked adventure was through, players complained of no real resolution to the story in favor of an obvious sequel setup. Now that sequel is just around the corner in Prototype 2, and Activision, along with developer Radical, gave us a chance to play through roughly the first hour of the game, in addition to a few other (oh so awesome) modes. Just what we saw in that first hour was enough to convince us that Prototype 2 is both similar to and vastly different from its predecessor, and it looks like the shifts made have been in favor of a better, more compelling overall game. The proof? I actually wanted to keep playing when the hour was up.

The extremely unlikeable Alex Mercer of the original Prototype plays a big part in the sequel, but in a reverse Metal Gear Solid 2-move, you actually WANT to play as the series' new lead. That lead is found in James Heller, a super-pissed, super-ripped war vet sent to bring down Mercer in a New York City under Blackwatch (a clearly evil military organization) quarantine. The ensuing brutal knife fight between the two warriors serves as the game's basic move-and-attack tutorial, and every inch of the admittedly scripted battle is just plain awesome. Eventually, as things tend to go in these situations, Heller is granted the same powers Mercer commands, and, um, is promptly captured and jailed. Woo-hoo. 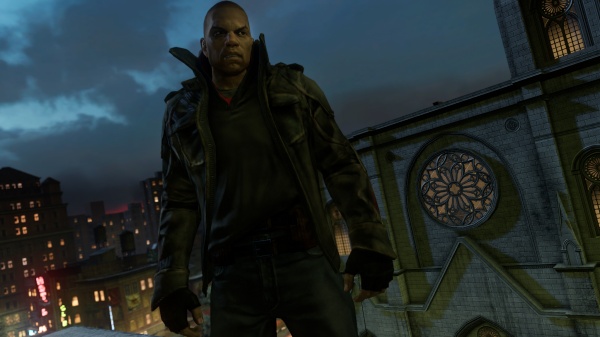 The rest of the tutorial plays out in Heller's escape from the lab/prison where he wakes up. By the time he's escaped, Mercer's made enemies with nearly everyone in the blighted city. He's also got a new purpose: Discover the secret behind Blackwatch, the horrible plague, his powers and how Mercer is connected to the whole thing. The setup, interspersed with full motion video laying out Heller's backstory, is a tantalizing one; already a far departure from the original's gloom-and-doom downer of a tale. Heller has a heart and real motivation where the one-dimension jerk Mercer had none, and the build to the open world break out is a wrenching, yet satisfying one. As Heller's powers manifest and you first glide out across the skyline, you actually CARE where he is going and why, which has an impact that's undeniable.

Once you are out in the "main game," you begin to see how nicely things control and how easy it is to get around. Heller can hop, jump and glide between buildings, run up walls, air dash (very useful) and go just about anywhere with ease. Of course your powers are limited at first, but as you progress, new abilities and powers are earned and upgraded, and all are available on the fly via a convenient click wheel menu. Most of these powers come out through different combat styles and means of super-powered destruction, and character building over time is always a huge plus in our book. Just how much progress is available was evident when Activision showed us Heller at his most beefy. Believe me, from just a fun standpoint, a maxed-out Heller will be something you'll want to shoot for; he's extremely fun to just take out for a spin, not to mention breezing through missions like butter. From a sheer gameplay perspective, Prototype 2 plays great and injects something previously missing from the series - honest to goodness fun.

And speaking of fun, I'll let you in on a secret: I hate mini-games. Hate 'em. I don't remember having to solve a block puzzle to open Wood Man's lair in Mega Man 2, and I certainly don't recall spending hours trying to beat my robotic ostrich race times. Imagine my surprise when I found myself continually drawn back to two of Prototype 2's mini-game style missions - a collect-the-item race similar to those found in (sigh) Infamous and a spin on bowling that is almost as much fun as the game itself. The running segments were only slightly more entertaining than past attempts at the standard mission, but the bowling. Oh, the bowling. This mini-game has players launching Heller of the side of a building and gliding over a number of soldiers standing in ever-increasing numbers. Players pick the right spot and dive bomb, attempting to use the surrounding shockwave to uproot as many baddies as possible. You get three tries to get them all, and you either move on or start over. As simplistic as it sounds, this distraction kept me playing and replaying for nearly 40 minutes, time that just flew by. Prototype 2 is shaping up to be a lot of fun, and little events - when they are as well done as they are here - are just icing on the cake.

The time Activision gave us with Prototype 2 definitely whet our appetites and left us wanting more. The single player campaign looks to be a seriously fun adventure, and if even the mini-games impress, what's not to like. Keep an eye on Gamers' Temple for our full review of Prototype 2 when it hits in April.