When you think of NASCAR, you probably think of one of two things: speed and the men racing the cars.  NASCAR Thunder 2003 has some changes in store for you this year that will help bring more of each into the racing game. 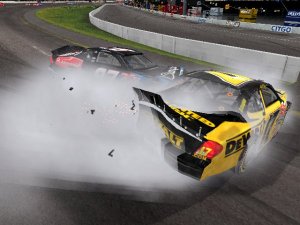 The first thing you'll notice about the 2003 version of the game is the upgrade of the graphics and game physics.  Many of these changes have been made to convey a greater sense of speed to the player.  Road surface blur, dynamic shadows and reflections on the car bodies, and wall and fence effects are just some of the things that will help to make you feel that you are actually driving a car at over 200 MPH.  The game physics now feature dynamic tire grip and wear patterns, collision physics, and handling and suspension behavior.  As cars are damaged, you'll see sparks fly, tires shred, and car parts on the track, and will have to compensate for the decrease in control.  If this all seems like too much simulation for you, you have no need to worry.  The game's adjustable difficulty controls will allow you to play the game as a fun arcade racer, even showing you the driving lines and braking points on the track if you want.

The NASCAR license means that you'll be able to race on all 23 Winston Cup tracks - 14 of which support day and night racing.  You'll also be racing against the sport's famous drivers, and will be able to instantly recognize the same cars that you see when you watch the races on TV - a total of 125 cars and 75 drivers in all.  You'll even have the opportunity to race against some of the legendary drivers of the game who have retired from active competition.  Richard Petty himself will tell you about the background of the tracks and teach you the best way to drive them.

You'll also get the chance to hear from other drivers through the game's Lightning Challenge mode.  This mode provides over 30 scenarios drawn from real race events.  The driver involved will describe the situation and what he did when it really happened.  You'll then be transported into the same situation and given a chance to relive the moment, seeing if you can recreate history - or even improve on it.

The game will also feature an enhanced career mode that will take you through 20 racing seasons.  You'll have the opportunity to manage all aspects of your career including obtaining sponsorship, building a car, performing R&D, and hiring and managing your pit team.  Cut back too much on your pit crew, and you'll see the results during races as the team drops bolts or makes other mistakes, costing you precious seconds of race time.