Pilot a spaceship in a segment of space fraught with both careening asteroids and enemy saucers bent on destruction. Maneuver through the debris and incoming hail of laser blasts, picking up a plethora of powerups, including the shot-deflecting Reflector, defensive Orbiting Bullets, devastating Mega Lasers, and Side Attack shots to cover the ship’s flanks. Get stuck in a jam, and hyperspace to a random spot on the level and pray it’s safe or it’s game over. 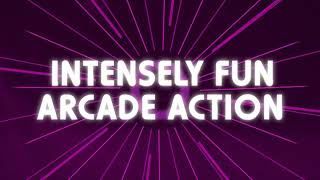