One of the best parts about the latest asymmetrical craze with horror games is that we are starting to get more unique experiences as they continue to release. Ghostbusters: Spirits Unleashed is the latest asymmetrical game to join the ranks of Dead by Daylight, Evil Dead, and Friday the 13th. The game is developed and published by IllFonic, the creators of Predator: Hunting Grounds. Overall, I really feel that the developers captured the overall feel of the Ghostbusters franchise rather well in this game and it feels unique enough to stand on its own.

The main mode in Spirits Unleashed is the 1v4 multiplayer mode where one player gets to play a ghost and the other four players get to choose a ghostbuster. The ghostbusters must team together to capture the ghost using their proton pack tether guns to drag the ghost into a trap. The ghost gets to respawn a certain number of times depending on how many rifts that it has left. The main goal is for the ghostbusters to trap the ghost when it has no more rifts left while the main goal for the ghost is to fully haunt the entire building.

The ghostbusters have access to a number of gadgets to help them find and capture a ghost. Along with the usual proton packs and ghost traps, they have PKE meters and other gadgets that they can choose from at a cart near the start of the building. The PKE meter is used to track a ghost or a rift. Both rifts and ghosts can be hidden inside of environmental objects, so they are hidden from the naked eye without using the PKE meter. You also gain other gadgets such as a type of gas grenade that can stun the ghost for a few seconds. Once the ghost is found, you have to toss out a trap, then open it and tether the ghost. Once tethered, you have to fight the ghost as it struggles while you bring it down to a trap. Ghostbusters have to worry about their proton packs overheating and the batteries for their traps losing charge. You have to keep an eye on all of this while trying to trap a ghost or you’ll be stuck without any means of attack or containment. The ghostbusters are at their strongest when all four players meet together – this way one player can be the trapper while other are reeling in the ghost with their proton packs. 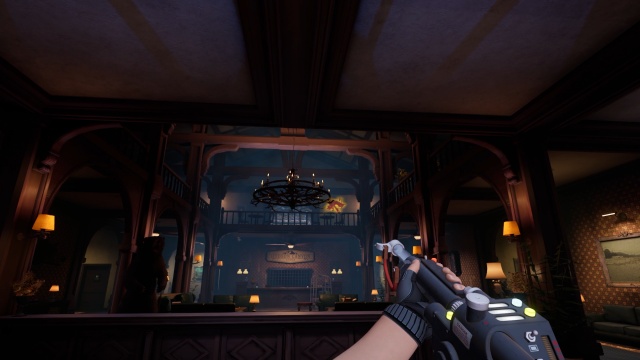 The ghost players must build up the overall building haunt meter. In order to do this, you can scare normal civilians to where they leave the building or haunt objects in the room. Every action you do as a ghost seems to build up the overall haunt meter for each room. As you fully haunt each room and scare off civilians this will contribute to the overall building haunt meter. The ghostbusters sure don’t make this easy for you though. You can possess objects to hide from them and hopefully they don’t use their PKE meter to find you. Ghosts only have a certain amount of power that will allow them to do special actions. Each ghost has their own unique normal attack and a unique special attack. All ghosts can summon minions. One good part about each ghost is that each one has 3-4 variations that have their own unique special attack, so each one ghost feels like about 3-4 ghosts once you start unlocking more variations. Even though each ghost has only one unique attack, there is a lot of strategy involved in playing each one. You sure can’t play an Ectoplast and a default Ghouly the same way. Some ghosts excel in fighting while others are more about running away and haunting objects or people. It’s a lot of fun to experiment with them.

Both ghostbusters and ghosts can be customized. Ghostbusters have the most customization overall. Both male and female ghostbusters can be created and there are many accessories that you can equip to them. By visiting a locker, you can change your character’s look by using items that are unlocked through gameplay. Ghosts themselves can also be somewhat customized. For each ghost variation, you get to choose a color. Each variation is like a different outfit per ghost. Unlike ghostbusters, you have to unlock ghosts by raising your player level. You start with only the slimer-type of ghost (Ectoplast) and are able to unlock four more through player level progression. 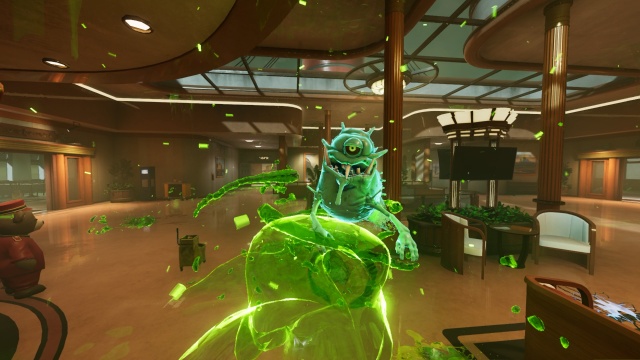 Besides multiplayer, the game has its own single player mode. While in single player, you’ll have bots that will team up with you and fight against your ghost. The AI works quite well for this mode. I only ran into a few AI problems, which is not too bad. In single player, you can easily choose a side and be guaranteed to get that side, so it’s an overall good practice mode. You can gain experience and all other unlockables (ghosts, customization, achievements, etc) through single player, so you really don’t even have to go online if you don’t want to. Whether you play online or in single player, the game does have a short story. In between matches, you’ll eventually get an objective to meet up with a character where you’ll get to view cutscenes. The voices and animations are quite well done during cutscenes. The story is basically the type of story you’d find in a TV episode of the original Ghostbusters cartoon.

The game has a total of five buildings that you can have matches in. Each location is rather big and has at least two floors to explore. The overall graphical engine for this game has its own unique style that is overall cartoony. This game could easily spawn a new TV series or movie series with all the passion that has gone into its characters. The characters are very likeable, both old and new. The voice work in this game is also great. The music brings in a lot of tunes from the original movie and some new tracks that fit well.

While not out on a hunt, you are free to explore the ghostbusters’ firehouse. It’s a nice recreation of what you’ll find in the original Ghostbusters movie. You can view collectibles, customize your characters, examine tutorials, talk to non-playable characters (NPCs), and engage in a few other activities while at the firehouse. The game even allows you to slide down poles! Each building has some type of collectible in it. You can unlock headlines and there is a collectible that gives you extra XP as well. 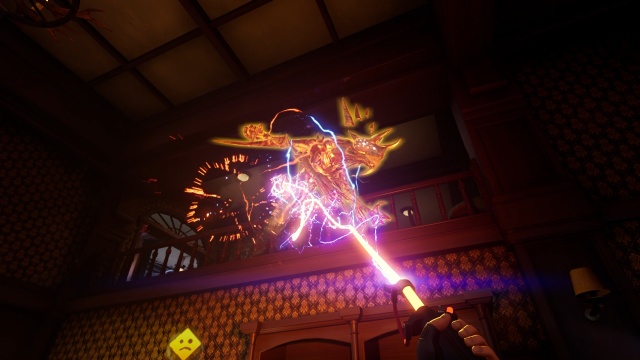 This is not the type of game that you’re going to play to upgrade your skill with each side – it’s more of a party game to play with friends. I don’t think we’ll be seeing entitled ghostbusters teabagging ghosts as they trap them anytime soon. Unlike other multiplayer games, while playing online, you can choose which side you want to play as, but you are not guaranteed that side. People that choose to play as a ghost might spawn as a ghostbuster or vice versa. The only lobby that the game has is to have all players meet up at the firehouse before starting a game. You have no idea who will be who until the game starts. I also did notice a bit of slowdown at times on Xbox Series X.

The game is overall a lot of fun to play. If you’re in the mood for an asymmetrical multiplayer game that you don’t have to take too seriously, then Ghostbusters: Spirits Unleashed is a great choice. The game is best played as a party game with online friends or randoms. I do feel that this game might have some complications with staying relevant in the future however since there just isn’t much outside of the one mode of play and there isn’t enough extra content to unlock once you reach a certain level. In the short run however, this game is quite good. Be sure to give the game a try if you’re a Ghostbusters fan. I’m sure fans of the series will feel right at home the most!

The Good:
+ The game has a good feel to it that captures the old-school Ghostbusters movies
+ There is a lot of fun to be had no matter which side you choose
+ Good single player mode where you face off against bots
+ Cross-play

The Bad:
- No way to choose a guaranteed side when starting an online match
- Can get repetitive quickly with only one mode of play