PowerWash Simulator’s title pretty much sums up what the game is about. It simulates using a power washer to blast dirt off of things. But it’s less of an attempt to immerse you in the life of a professional power washer cleaner, and more of a game that gives you long tasks that don’t require too much thought. As you methodically sweep your washer over things like vehicles, driveways, and BBQs, you’ll watch your water jet transform these objects from dingy browns and blacks to their true colors. The experience is not unlike a simple mobile coloring game, the kind in which you just swipe your fingers across the screen and the game fills in the colors for you. If this doesn’t sound appealing to you at this point, there’s not a compelling reason for you to check out PowerWash Simulator. You can read on about the game’s campaign, power washer accessories, and the like, but even with all of that it’s still a game that will have you spending hours sweeping a sprayer over large surfaces. If on the other hand you’re looking for a game that will just let you chill and while away the hours almost mindlessly changing the color of virtual objects, then PowerWash Simulator will do the job quite nicely. 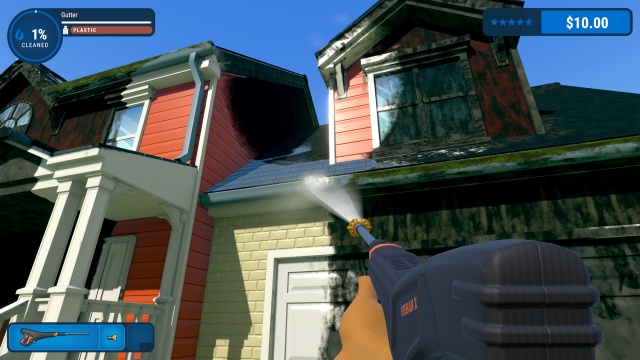 PowerWash Simulator is an FPS, first-person sprayer, where your wand takes the place of the gun you hold in shooters. You use a trigger to activate the spray, and can switch the fan of the water jet stream from horizontal to vertical with the tap of a button. This is useful when you’re switching from sweeping the front of a gutter pipe to trying to get the dirt between it and the wall or while trying to get into all of the nooks and crannies on a dirt bike. You also have the option of switching out the nozzle, which controls the size of the jet’s fan and the water pressure. More coverage means less power and vice-versa, the former being good for cleaning the side of a house, and the latter for getting the grime between the stones lining a pond. As you progress through the game, you’ll have the opportunity to obtain new wands and nozzles, as well as various kinds of soaps that make your work easier on different types of surfaces. The type of surface, rock, metal, or wood, for example, has an impact on how effectively you can clean it, and if you’ve got the wrong nozzle or soap, you may find that no amount of blasting will get it clean. The game also lets you control your stance, and you’ll find that you sometimes need to go prone to blast the undersides of things.

The game provides feedback on how dirty an object remains as you work on it. There’s the visual aspect in that you can see the colors under the grime come to life as the dirt is washed away, but there’s also a meter on the screen that provides feedback on roughly how much of the job has been completed. You can also use the D-pad to get additional visual feedback by turning any remaining dirt bright orange for a few seconds. This can be particularly helpful on objects whose natural color is dark. Larger objects are logically broken down by their components, so you can concentrate on cleaning, say a bumper, and make sure that it is completely clean before moving on to the next part of the job. The game isn’t overly strict on making you find every last speck of dirt, either. When you get really close, you’ll hear a ding and the object will briefly flash, and then you’ll know that it has been declared clean. There’s also an in-game data pad that you can use to reference a list of every object on a level and what remains to be cleaned. Once you finish a level, you’re shown a high-speed video replay of your work from a third-person perspective. The game doesn’t record every single action, but it’s still fun to watch an accelerated replay of how you went about accomplishing the job. 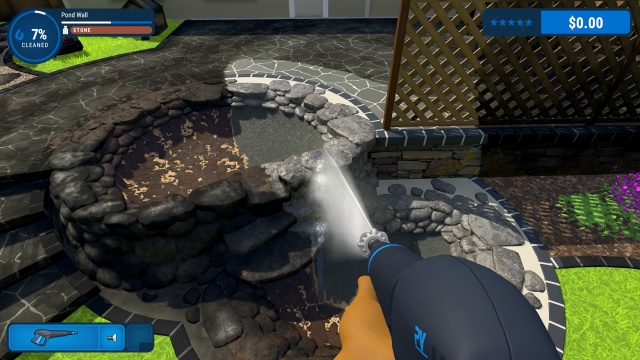 The game’s campaign puts you in the role of the owner of a power washing company startup. There’s not much of a story here, you receive some text messages about potential clients, select which job you want to take on next, and then get to washing. You’ll get paid per completely clean object, but you don’t have to clean every object on a level to progress. With the money you earn you can buy additional equipment and soap, or buy a new suit for your cleaner to wear as you’re watching your replays. Some of the levels are relatively small, such as cleaning up a dirt bike, but others are far more expansive, like homes or a playground, that will take a lot of work to complete. Outside of the campaign you can complete individual cleaning tasks, including getting the Mars Rover back to the shiny state it was in when it left the planet. There are also challenge levels which give you tasks that must be completed within a set time period or with a limited amount of water. You can also play the game in co-op if you want to get a job done faster. 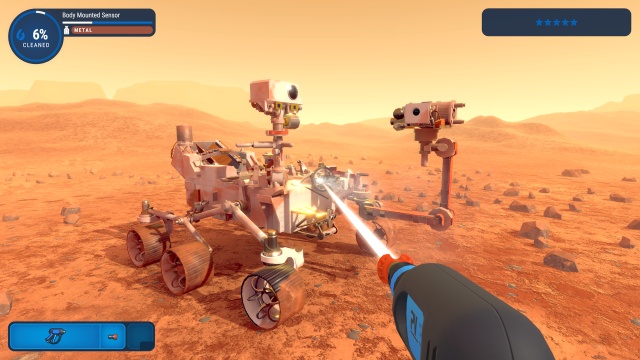 PowerWash Simulator is a direct PC port, and if you’ve played one before you know how frustrating these things can be to navigate on a console. A controller is not a mouse, and trying to use it as one to interact with the interface can be a chore. I could never get the datapad’s screen to scroll smoothly without jumping entire screens at a time, so the job breakdown list was often useless to me. Luckily the actual gameplay has true controller support and everything is OK while you’re doing your washing, but everything outside of that is a pain to navigate.

There were times while playing that I felt the zen of cleaning, my mind cleared by the soothing sound of water as it steadily droned on or changed pitch while moving between different surfaces. There’s also a certain sense of satisfaction that comes with transforming some grossly dirty areas into the pristine places that they were meant to be. However, there were plenty of times when the simulated work felt like real work. Spending over ten minutes walking slowly back and forth across a driveway to finally get it clean and then looking up and seeing how far you have to go to get the rest of the home clean can be both frustrating and disheartening. The relaxing moments provided by the game were simply outnumbered by those that became more and more tedious by the sheer number of large surfaces that must be cleaned in the game. You can easily spend an evening cleaning somebody else’s home for them, and then look back and think that you could have spent the limited time you have for relaxation and entertainment more wisely.

Final Rating: 65% - PowerWash Simulator is for those who’d rather spend time cleaning than playing video games.