By now, Supermassive Games is quite well known for their horror games. Until Dawn is often considered their best game, but I feel that I have a new favorite in their latest game - The Quarry! The Quarry is an interactive cutscene-driven survival horror game developed by Supermassive Games and published by 2K games. The game is overall just as long as Until Dawn and it has many branching paths that the story can take. If you liked Until Dawn, be sure to check this game out!

The Quarry takes place at Hackett’s Quarry summer camp. After a bloody prologue, we return to modern times where a group of camp counselors are now done with their job as camp counselors and are headed home. After saying goodbye to a busload of departing children, the group gets ready to leave the camp via the camp van, but can’t because of a sabotaged vehicle. Not all is bad though, as they ignore the warnings of their superiors to stay inside and decide to go out partying. Before long, bad stuff starts happening, heads start flying (literally), and the walls of buildings get drenched with blood. 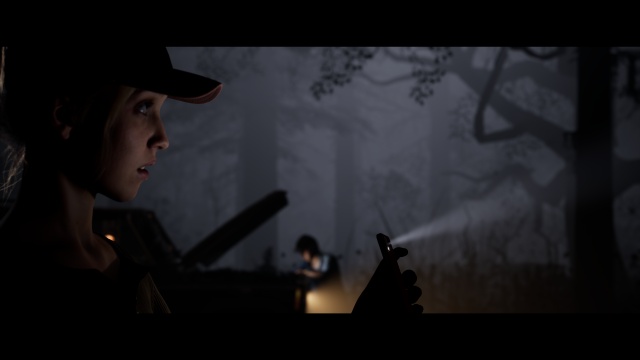 If you’ve played Until Dawn or the Dark Pictures Anthology games, you’ll know exactly what to expect in The Quarry. The gameplay is very decision-based to where you must make decisions that will progress the story. The Quarry has quite a lot of ways to change the story. Besides decisions, you have Quick Time Events (QTEs) and in-game exploration. The game will eventually take a break from the cutscenes to allow you to explore an area. You can uncover clues and other collectibles that might open-up new paths in the story or lead to unique conversations.

Unlike the QTEs in other games, this game uses directional QTEs. You must press in the on-screen direction with the left thumbstick to pass a QTE. These types are actually way easier. Once I got the hang of the new QTEs, I never did miss anymore. It’s kind of a double-edge sword to say whether this is good or bad. I get quite annoyed at quick button QTEs in other games that lead me to fail because I’m not quick enough to find the correct button, but I have to admit that The Quarry’s QTEs are way too easy to fail. If you find them too easy, there is a way to adjust them in the option menu to make them harder, however. You can also adjust many other gameplay elements to make the game easier or harder (automatic shooting segments, hold instead of tap buttons, etc). The game also has a “Hold your Breath” minigame that basically takes the place of the “Don’t move” Until Dawn minigame. You have to hold down on a button to hold your breath and then release once an enemy has passed by your location.

Once again, you are the director of this game/movie and you make the call on who lives and who dies based on your actions. Making a wrong decision, missing a QTE, failing to make a move, not hiding at the right time, shooting at a person, not shooting at a person – all of this may lead to the death of a character. Sometimes the decision deaths can be quite annoying with some of the instant deaths, but it makes the replay value quite high. It’s absolutely amazing how many branching paths the story in this game can take. The game clocked in at 10 hours total for my first playthrough. It definitely has more length when compared to the Dark Pictures Anthology games. 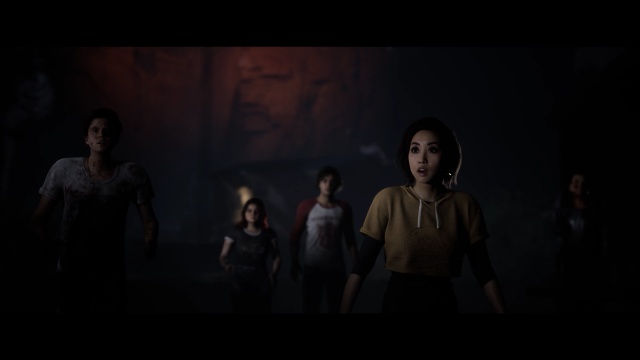 It’s easy to see that this game is heavily inspired by 80’s slasher movies such as Friday the 13th. The game definitely has that type of feeling. So much of this type of game’s enjoyment depends on the characters and I’m very happy to say that the characters in this game are absolutely fantastic. They are all good from the start and the game moves slow enough (at the beginning) to allow us to get to know each of them. Aside from one, it seems like there is no character that has little screen time – based on your actions, the majority of them get a good number of gameplay moments. Just like in other Supermassive games, all characters are motion captured and played by live actors. High profile actors play the older characters and a group of up-and-coming actors play the counselors. The actors for this game really need to give themselves a pat on the back because they did a really good job with each of their roles.

The Quarry has high production value all over it. Not only are well-known actors in the cast, but this game looks fantastic. It’s by far the best game from Supermassive so far. Characters animations are more fluid and the character models have more detail. The lighting in the surroundings is realistic and the environments themselves give off a really creepy vibe in certain areas. The gore factor is really high in this game as well. When a character dies, that character doesn’t just get stabbed, they get beaten to a pulp after an appendage is removed. It’s like the developers are saying “Yeah, that character just got destroyed and won’t be returning anytime soon... and it’s all your fault!”

Just like the Dark Pictures Anthology games, the Quarry has local and online co-op plays. In Local play, players can take control of different character as the story progresses. In online play, the host plays the game and other (invited) players can vote on decisions that the host makes during their gameplay. Just like with Dark Pictures, the game limits you to only being able to play with friends that are on your friends list. Why can’t we play with random players by now!? 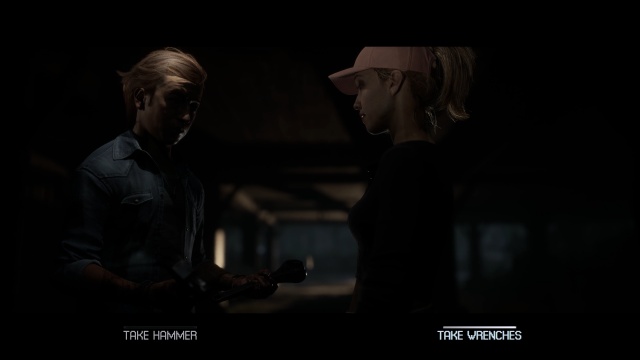 Once the game is beaten, you get access to a stage select and there is also an option to continue once a character falls. You’ll get a total of three lives on your next playthrough, so in case you mess up, you get to try again if a main character dies. The game also has a movie mode that you can trigger to just sit back and watch while keeping hands off the controller. Since these type of games are basically interactive movies, it’s a good addition. Overall, this game is my new favorite game by Supermassive Games. It’s just as long as Until Dawn and it has even more branching paths in its story. Definitely pick up this game if you’re fan of games like Until Dawn or Dark Pictures Anthology!

The Good:
+ Very engaging horror story
+ The characters are fantastic – all of them!
+ Local and online co-op play
+ The game has a lot of replay value with all the different paths the story can take

The Bad:
- We can still only play with players on our friends list in online mode, just like the Dark Pictures Anthology games...

Final Rating: 85% - The Quarry has just surpassed Until Dawn as my new favorite interactive horror game. This is some high budget horror!