The King of Fighters XV Review

The King of Fighters XV is the next installment in the long running King of Fighters (KOF) series that started back in 1994. This 3v3 fighter is developed and published by SNK. Honestly, I could sum up this review in just a few words for the majority of readers – yeah, the game has rollback netcode and yeah, it plays fantastic online. I’ll go ahead and humor you and talk about everything else further down though.

One of the most important parts of any KOF game is the roster. KOF XV has a roster of 39 characters. By just mentioning numbers, 39 seems small when you look at KOF XIV and its default 50-character roster without the DLC characters. KOF XV’s roster has MANY popular characters in it. Just about every character is a fan favorite. KOF XIV’s roster had some very obscure characters that not a lot of people used. The extra slots for KOF XV’s DLC characters are already up to 13 fighter slots at the top of the roster. If everything is planned out well with some good returning characters for DLC, this fully complete roster for KOF XV could be pretty ultimate. 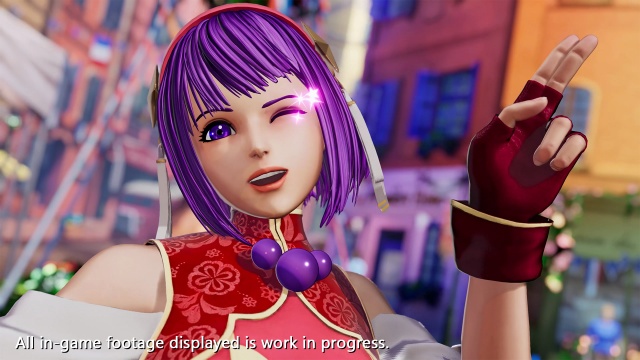 It’s noticeable that some of the mainstay characters are missing such as Vice, Mature, Sie Kensou, Kim Kaphwan, Chang, Choi, and Goro Daimon, but the roster is still pretty stacked and the announced DLC characters so far are looking good. The new characters in the roster are Isla, Dolores and Krohnen McDougall. All the rest are returning characters. Just like any other KOF, some of the teams are different this time. It’s very noticeable that character sprites are now bigger than they were in KOF XIV. Characters are overall more detailed than they were in KOF XIV – you can tell this on the face since the eye area looks more natural when compared to KOF XIV. The particle effects for projectiles have taken on a bright appearance similar to Capcom VS SNK games. The particle effects were more “smokey” in KOF XIV, but this time they are brighter and more glow-y. The climax attacks in KOF XV look way better than they did in KOF XIV – a lot more time was spent to make them look flashy in KOF XV.

The overall gameplay to KOF XV feels like a faster Street Fighter. It should be familiar to any fighting game fans, but combos require some really good timing and the commands needed for flashy combos require some high-level training. It’s noticeable that the overall damage output in KOF XV is higher than it was in KOF XIV. Combos with super attacks can easily take around 75% of an opponent’s health bar. The higher damage output is really good since the game is already a 3v3 fighting game with many rounds per match and it keeps the timer from being much of an issue this time. 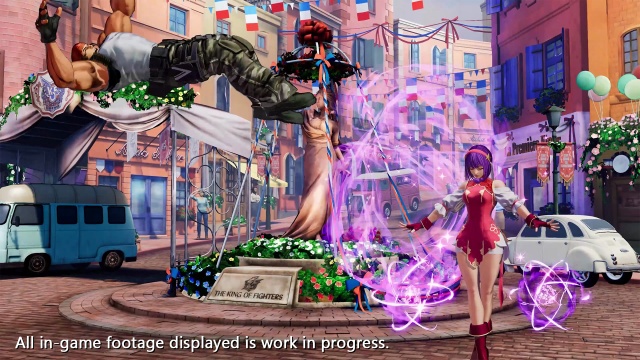 The gameplay has a few new additions. Max mode (both normal and quick) now takes 2 bars of meter in order to activate. Your character now takes off more damage on your opponent’s health bar and guard gauge when in Max mode. EX special moves are no longer tied only to Max mode this time. You can perform an EX special move at any time for the cost of half a meter. Along with Blow Back, there is now an attack called “Shatter Strike” that cost a half a meter. Shatter Strike is a counter move that has the same properties of Blow Back except your opponent will collapse instantly without flying into a wall. The addition to Max mode is the most interesting since it makes activating it outside of a combo more useful. EX attacks should have honestly been the way they are now to begin with since they are too useful to be tied behind Max mode.

The story mode is around the same as you’ll find in any other KOF game. It doesn’t try to “wow” you with overly long cutscenes or any type of really deep story. It’s just there as a companion piece to a fighting game, which is all I really expect for a fighter. If you’ve played the older KOF games, the story setup will seem familiar, basically you’ll see a broadcast tournament with trouble brewing behind the scenes and a big baddie boss that showcases toward the end. Story mode has some nice character interaction cutscenes and introductions that can take place when certain fighters go against each other. The endings also have some great images to tell the story. All endings go onto a collection menu so that you can view them once again. Even though the story mode is simplistic it has some good lore for each of the teams, especially in their endings.

Story mode is basically an arcade mode as well. If you simply skip the cutscenes, you can get straight to the fights, just like in older KOFs. There is a leaderboard for point totals in story mode as well. There is also a mission mode where you get five combo trials per character. The tutorial mode is pretty much the same as it was in KOF XIV. It goes over basically the same techniques as KOF XIV only with a few additions. There is also a versus mode for offline versus, a gallery for character voices and movies, and a DJ Station that allows you to change the music per stage. The game has a great soundtrack. It has a few tracks with lyrics that are catchy and many stage-specific tracks that sound good.

The other important part of any fighter is the online play. KOF XIV’s online play was a mixed bag, so it was very important that KOF XV address this and it did! KOF XV has rollback netcode and it plays really well online. All my matches online went very smooth – basically felt like playing offline versus. This online is so much better than what I found in KOF XIV. You can play against other players through Ranked or Casual matches. There is also an option for a Room Match and Online Training. Lobbies in Room Matchs can fit up to 8 players and players can spectate while two other players fight. There is an optional waiting list in the center of the room where you can queue up to fight. Room Match allows for different match rules to be set by the room creator. Replays are available for viewing your own replays or replays of others that have been uploaded. You can save replays for viewing later. When playing against others, you can choose to go against players in your rank or any rank and you may also choose from different connection speeds and regions. While waiting for matches, you can spar in the training mode. 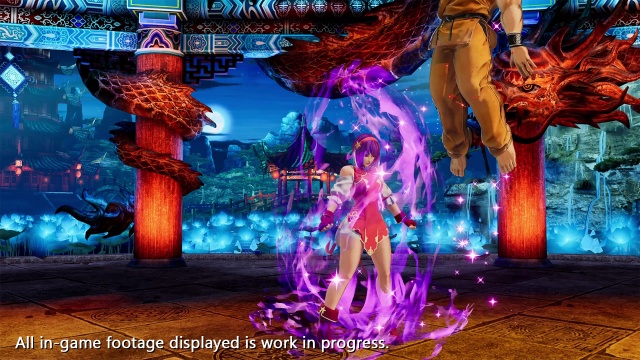 The only flaw that I can really find with the game is there isn’t much in the way of single player outside of the story mode and mission mode. As already said, the story mode doubles as an arcade mode if you skip the cutscenes, so it is basically your standard arcade mode if you want it to be. The King of Fighters XV has everything where it truly counts – overall good character roster and most importantly good online play. The visuals have definitely improved and the game has edits to gameplay that make it feel a lot better than KOF XIV overall. Just like other KOFs, the game takes much dedication to get good at, but it’s still fun even when playing casually. If you enjoyed KOF XIV, you’re pretty much sure to enjoy KOF XV as well. If you didn’t like KOF XIV because of its online then definitely be sure to give KOF XV a try – it’s WAY better online.

The Bad:
- Story mode and Mission mode are basically the only single player modes

Final Rating: 86% - The King of Fighters XV busts onto the scene with some great online play, improved visuals, and gameplay enhancements.