Back 4 Blood is an online multiplayer first person shooter that is considered a spiritual successor to the Left 4 Dead franchise. The game is developed by Turtle Rock Studios (the same developers who worked on Left 4 Dead) and published by Warner Bros Interactive Entertainment. The Gears of War franchise is about the only online multiplayer experience that I have, and I have not played any of the Left 4 Dead games so this review will have very few comparisons to other multiplayer shooters. Overall, I had a blast with Back 4 Blood. The game has so much replay value and tons of unlockables (mainly cards) to unlock that it will still continue to keep me busy for quite a while this year.

Back 4 Blood goes online whenever you start the game each time. You can’t play the game without an online connection. Just like Left 4 Dead, the main meat of the gameplay is in the online campaign. There are a total of eight characters to choose from. The first four are unlocked from the start and the rest of them unlock as you go through the campaign (unlocked after completing all of Act 1, I believe). Each character has their own unique perks. All characters come with a starting primary and secondary weapon, but you can change weapons and customize each character’s weapons from the start or as you go through each level.

The gun controls and overall aiming are both finely tuned in this game. Shooting feels smooth and very accurate. You have loads of different guns to choose from and many variations for each gun type. Guns can be equipped with parts that can boost their attributes. The campaign is divided into Acts that are split up into several levels. Each level is usually about getting all players to the safe room at the end and shutting the door. Some levels require you to perform minor objectives along the way – such as transporting crates to the safe room or boarding up a safehouse. Some require you to destroy enemy nests.

Your main adversary in Back 4 Blood is the “Ridden”. You’ll face legions of undead such as your standard zombie. As you continue, you’ll face off against more aggressive and/or bigger zombie mutations. Many of the enemies in the game are similar to Left 4 Dead enemies. Just like Left 4 Dead, the game will throw zombie hordes at your team often. You can do certain things that will cause a horde to come your way or the game might just eventually tell you that a horde is about to show up. Sometimes accomplishing objectives will cause a horde to appear. The campaign has a lot of randomness mixed in with the scripted enemies that you’ll fight. You never truly know what you’re in for at times and must react appropriately which leads to some sudden intense situations out of nowhere.

The main fun of Back 4 Blood comes in going online and teaming up with other players. The game is fun whether playing with friends or with online randoms. I’m sure many reviews will tell you that you need to have some online friends to enjoy this game, but I disagree with that. Sure, having people you know will help out a bunch for the harder difficulties, but the game is still a lot of fun just when using the “Quick Play” options that will team you up with random players. The randomness and “thinking on the fly” while teamed up with unknown players can be quite challenging and a lot of fun. The game has a total of three difficulties to go through. Even the lowest difficulty can be quite challenging in the later acts as the enemy aggressiveness starts to pick up. 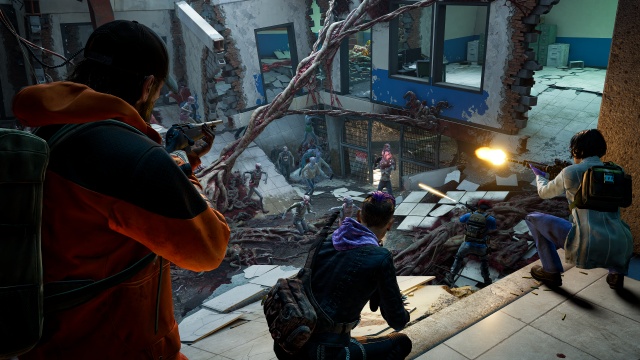 The game did have a single player mode when I first started, but it’s been updated to “coming soon” for now. The original single player mode is now dubbed “Training Mode” and it’s just basically that. While playing in Training Mode, you can’t unlock anything (no achievements or supply points), but you can still progress through the entire game with only bots to accompany you. This mode is not that fun at all and it is definitely just a “Training mode”. The bots don’t help out as much as real players and they can sometimes get stuck in the environment or do some weird things, such as suddenly committing suicide by jumping into a chasm.

At the end of each online session, you’ll get a certain amount of supply points based on how well you did. Supply points can be used to unlock collectibles and cards at a Supply Line. The game’s cards can be added to decks and the decks that will give you certain attribute bonuses once equipped. Cards can play a huge role in helping you through higher difficulties. Cards can give attribute bonuses such as higher health amounts or faster reload speeds among many other bonuses. Corrupt cards increase the difficulty of the game but can sometimes reward players with bonuses after finishing certain tasks are completed. Supply lines are also where you unlock extra outfits and other collectibles for your characters or profile.

Along with supply line purchasing, the game allows you to try out weapons and choose between other options while at a camp. You’ll go to the camp while you’re not playing online – it’s basically like a lobby or training area where you can hang out and explore the various options of the game. There is a shooting gallery where you can equip weapons and shoot at targets. Pretty much all the weapons in the game are laid out for you while at a camp. While the game is searching for an online campaign or swarm game, you can move around the camp freely. 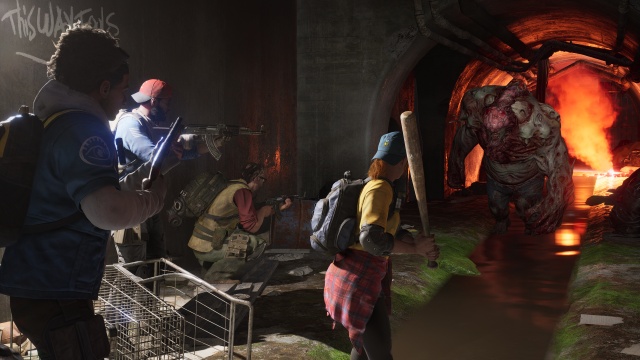 Besides the campaign, the game also has a 4v4 multiplayer mode called “Swarm mode”. This mode pits a group of four survivors against a group of four Ridden. Survivors must band together and load up on items and ammo while preparing for an oncoming Ridden horde. The goal for the Survivors is simply to survive the horde but that certainly isn’t easy. The Ridden side is composed of four players along with several CPU controlled Ridden. Playing as a Ridden is a great break from using the usual survivor. You can choose from several of the more powerful Ridden and they all have some very unique controls. Some of the Ridden are big bruisers and some of them are more stealthy or agile. Both sides have their learning curves and it’s a lot of fun to experiment. The mode switches both teams between Survivors and Ridden until one side gets the most wins.

Back 4 Blood is loads of fun no matter which mode you play. The game supports cross platform (and cross gen) play for both multiplayer and co-op modes. The campaign is easily the best part of the game, but the multiplayer mode is a good companion mode. So long as you don’t mind that the game is always online and that there isn’t much of a single player mode at the moment, the game is quite good. I’m not much of a fan of online multiplayer shooters, but this type of game with loads of replay value is what I look for whenever I do play one. Like I said at the start, I don’t know how the game compares to Left 4 Dead, but that really shouldn’t matter much since Back 4 Blood is its own game, and it’s a lot of fun.

The Good:
+ So much replay value!
+ Card system has tons of options for decks
+ Overall gun controls are finely tuned

The Bad:
- No true single player mode yet
- The game must always be online

Final Rating: 85% - Back 4 Blood will give you many hours of shooter goodness and keep you coming Back 4 More.