With the release of Dead by Daylight and Friday the 13: The Game, the asymmetrical multiplayer genre has had a decent bit of variety in recent years for horror fans. Dead by Daylight came out as the clear winner, but other horror franchises are now stepping up to challenge with the most recent one being Evil Dead. Evil Dead: The Game is an asymmetrical horror multiplayer game developed and published by Saber Interactive. If you’re a fan of Evil Dead, you will likely really enjoy this game. The developers definitely put a lot of passion into this title and it shows all over the place. 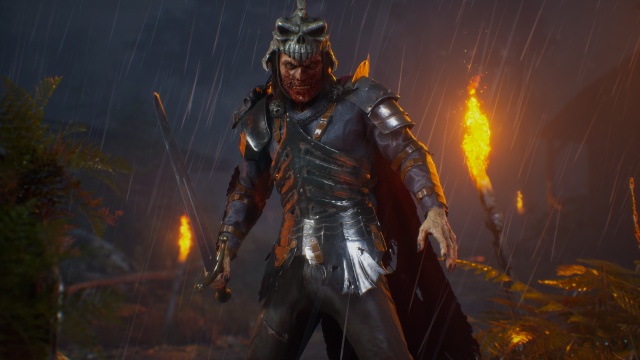 The heart of Evil Dead is its 4v1 multiplayer mode where one player takes on the role of a demon and the other four players each choose one of the game’s survivors. The survivor team must accomplish objectives that start out with finding maps, then they must assemble the pages of a book (The Necronomicon), and then go and fight the big group of demon masters in the area. The demon player must stop the survivor team from accomplishing these objectives. Each match has a certain time limit that the survivors must complete their objectives by.

The demon side is the most unique side to choose. The demon moves at high speed around the map as an invisible entity that can manipulate objects in order to set traps. Traps will cause the fear meter to grow in survivor players to where the demon can take possession of a survivor player and use that survivor against the other survivors. The demon can also place portals that will summon their unique minions. The demon player can take possession of their minions in order to give full control to the demon player for a few seconds.

In order to perform any type of attacks, the demon player must have energy. The demon’s energy bar constantly recharges at a slow rate and you can collect energy orbs spread around the map. While attacking and setting traps, the demon player will gain experience. As the demon player levels up, you can use skill points to level up your attributes. Depending on how the match is going, you may choose to power up certain attributes before others. 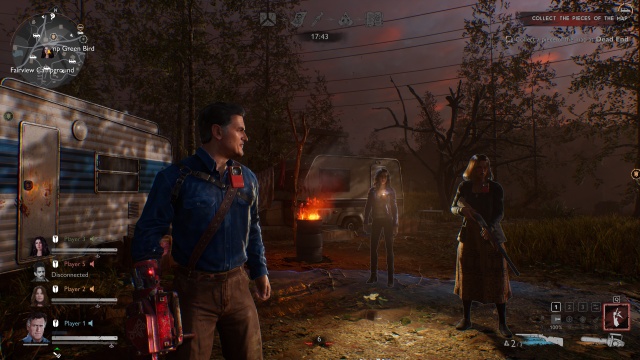 At the game’s launch, the demon side has a Warlord, Necromancer, and Puppeteer demon. The Warlord specializes in raising their army of deadites, the necromancer has an army of the dead (skeletons) and can increase their damage with a flute skeleton, and the Puppeteer specializes in possession and has their own army of electrical demons. Each demon has their own boss demon that can be summoned as well – Warlord (Henrietta), Necromancer (Evil Ash), and Puppeteer (Eligos). The boss demon has even more attacks than the basic minion and can cause more damage to survivors.

Survivor abilities include healing, lowering fear, boosting melee attack, boosting projectile attacks, and so on. The survivor team starts out with nothing (unless your character has an ability to start with a weapon) and must scavenge the surrounding area for weapons and items. Weapons (both melee and projectile) range from common weapons to legendary weapons and there is definitely a difference in attack power for each one. All survivors can carry a certain amount of healing items and shield items. Survivors can also use matches to light bonfires and lanterns in order to lower their fear. The survivors must accomplish their objectives while battling against the pesky demon player.

Survivors can level-up during gameplay just like demons. They can collect bottles that will give them skill points and allow them to level up their attributes during gameplay. Before each game begins, both survivor and demon players can choose from skills in a skill tree to upgrade their character before going into battle. One nitpick I have about the skill lists is that you cannot have multiple builds at this time. In order to have a different build, you must take your existing setup and take away skill points from it in order to create a new build. There should be some sort of slots for each build that you create per character/demon. 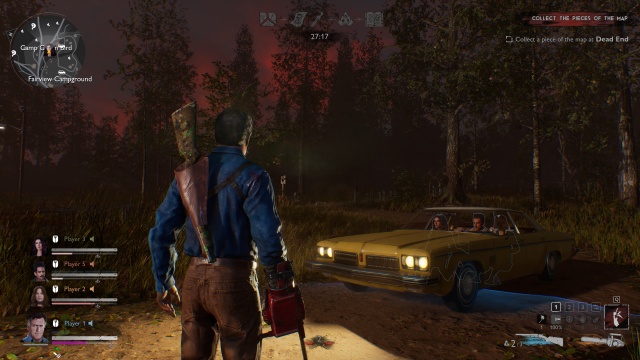 A big part of playing survivor is keeping your team alive and focused on the objectives. Survivors can resurrect each other so long as the player doesn’t go beyond the “bleed out” phase of being knocked down. Managing your fear is just as important as managing your health though. The demon player can literally have an ace up their sleeve if survivors are equipped with high-tier weapons. If a demon possesses as survivor with high-tier weapons, the demon will take just as much damage off the players as the survivors take off their demons. This alone is truly a great balance to the game for both sides – if the survivor side manages to find some ridiculously damaging weapon or techniques, the demon side can use it against them.

Evil Dead is full of references and contents from its movies/series. All of the survivors and demons are taken from the movies/series. The demon movement is taken directly from the Evil Dead movies. As the demon, you basically move around in a sort of spectator mode that mimics the way the demon entity moves through the woods in the Evil Dead movies. One environment has the original Evil Dead cabin in the woods. The environments in the game are absolutely huge, which is fitting for a demon that can move at high speed and survivors that have access to vehicles. Environments are mainly composed of forests and roads, and there are side areas such as buildings and tunnels in each one.

Both the environments and character models have a lot of detail in them. The Ash player variety is taken directly from whichever movie/series he was in and the same goes for most other players. A few of the survivors look somewhat different than they did from their media presentation, but you can still tell who they are (such as Scotty and Cheryl).

The overall controls to the game are fitting. There are a lot of commands mapped to buttons, especially with survivors. You can use a mic to communicate with other survivors, but the game doesn’t really need one since there is a command button that you can hold and choose from commands with the thumbstick. You can choose commands such as needing ammo, medallions, colas, etc, all with a button. Places on the map can also be marked to set up an on-screen icon to help navigate – this can be done for both survivor and demon. Destination markers really help out for a game with super huge environments.

Aside from the multiplayer portion, you can choose to play the game single player. There is a tutorial mode where you are free to experiment with both survivor and demon. There is also a mode where you can play as a survivor against an AI demon and with AI survivor. There is another mode where you can play with online survivors against an AI demon – this mode is more like a traditional co-op mode where four players fight against AI enemies. A mission mode is included as well. The mission mode allows you to play through single player missions where you must accomplish certain objectives by yourself. The game offers unlockables (characters and tapes) for finishing missions. 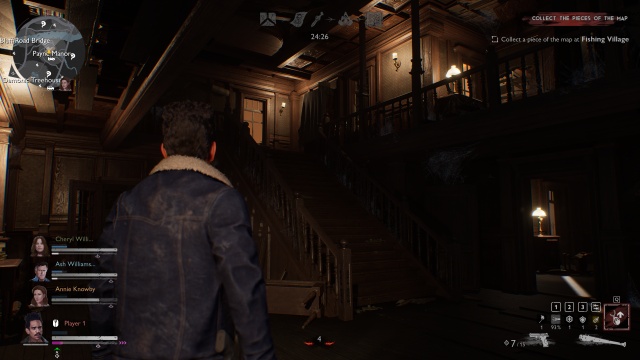 If you’re a fan of Evil Dead, this game is meant for you. It’s easy to see that the developers are fans of the series as well. Even if you’re not a fan, this game is still a lot of fun. It is one the most balanced asymmetrical game that has released yet. There were a few problems with melee canceling when the game first released, but that exploit has already been addressed in one of the recent patches, so it goes to show that the developers care about balance. The game also has cross-play! If the game can maintain some good download content in the future, this game will be one to talk about and play for the months to come. Just from the start, this game already has “JOIN US” wrote all over it... and if you get that reference, you will enjoy this game the most!

The Good:
+ The game feels balanced on both sides (Survivor and Demon)
+ The overall look of the game is quite detailed, especially for a multiplayer game
+ The developers have captured the feel of the Evil Dead universe all too well
+ Cross-play from the start

The Bad:
- Sometimes survivor map objectives spawn too close together, giving them too much of an edge
- Hit detection for weapons can sometimes be a bit off.
- Skill sets per character/demon should have slots for different builds

Final Rating: 85% - One by one this game will take you! It is going to consume all of your free time.