I don’t know about you, but Alien Isolation still stands as one of the best Alien game experiences that I have had. Whenever a new Alien game gets announced, I always try to keep up with it and eventually play it. When I learned that Aliens: Fireteam Elite was going to be a third-person co-op shooter, I definitely had my doubts. Honestly, from videos and screenshots, the game doesn’t look so hot, but now after playing it, Fireteam Elite is a very good game. It’s an overall good experience for fans of the movie Aliens since it does well in capturing the action and shooting found in that movie. Aliens: Fireteam Elite is developed by Cold Iron Studio and 20th Century Studios. 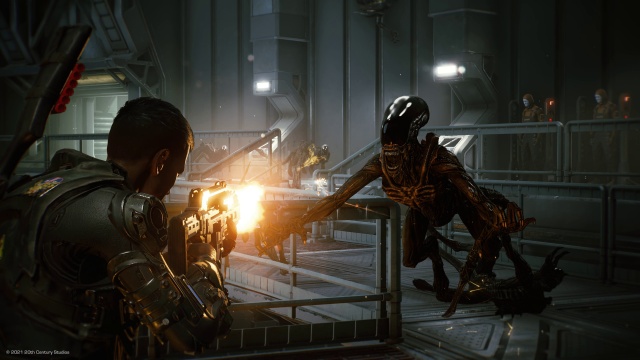 Fireteam Elite is a sequel to the original Alien trilogy. Just like Colonial Marines, Fireteam Elite focuses on action rather than suspense. Players take on the role of a colonial marine stationed on the UAS Endeavor (spaceship that responds to distress calls). You team up with a team of two other players to get through rescue missions. Starting out, you create your own colonial marine using the character creator. Character creation for appearance is kind of limited but the outfit customizations are quite nice. You get to choose from six character classes (Gunner, Demolisher, Technician, Doc, Phalanx, and Recon) and the classes can be swapped in and out whenever you want. Both your character and the character classes gain experience as you complete missions.

Equipping different classes will change your weapon setup. Each class has a primary weapon and a secondary weapon along with unique abilities. One ability is passive while the other two are active and have a cooldown. All classes have a perk tree where you can place core perks (attribute perks) and modifier perks (to modify abilities). The classes are quite fun to mess around with and you’ll be unlocking tons of new upgrades and ability modifiers as you level up each class. The weapons in the game have a lot of variety. Each gun class has around three different styles of guns. For instance, hand guns have magnums, riot guns (small shotgun), and auto pistols (machine pistol). The heavy weapons of the demolisher are some of the most fun weapons to mess around with – weapons such as rocket launchers, machine guns, flamethrowers, grenade launchers, etc.

You get to customize your fire team at the UAS Endeavor, which is sort of like your hub. Some weapons and customizations can be bought from the store at the UAS Endeavor. Once customized, you play through one of the four main chapters of the campaign. Each campaign chapter has a total of three missions, so you have twelve missions altogether. The enemies you’ll face are xenomorphs, synthetics and pathogens. All of the enemies have their own unique varieties. Xemnomorphs have the basic small xenos, acid-spitting xenos, warrior xenos, etc. Naturally, Xenomorphs are the most common enemy to find on missions. The game sometimes throws both synthetics and xenomorphs your way and the two sides fight against each other while trying to stop your team. 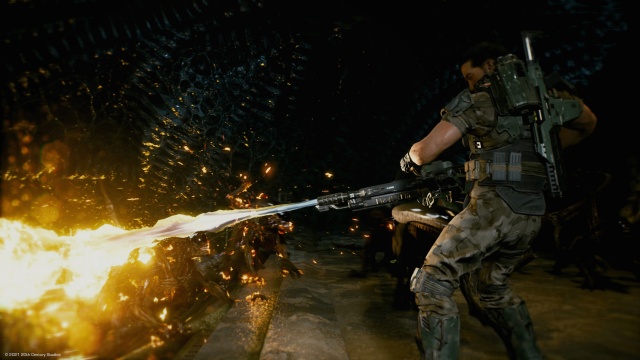 For a third-person co-op shooter, this game has some really great atmosphere to it. There is a sense of dread and suspense while walking through ship corridors. Pipes will hiss, you can hear sounds off in the distance, sometimes a yell of a warrior xenomorph can be heard shortly before it attacks. The game’s got some great sound design. The weapon sound effects are taken directly from the Alien movies. If you’ve seen Aliens before, you’ll recognize the assault rifle sound effects easily. The game also has many references to Alien movies in its collectible files (intel). Each mission has a certain amount of intel to find. Once an intel is obtained, when you return to your base, you can go and talk to a certain person for details on the intel. Each intel piece has a story to tell that is sometimes a reference to the Alien movies. The game actually references Prometheus and Alien: Covenant in some regards, which I found very satisfying since I love those movies.

Campaign missions can be played either online with two other players or offline by yourself. While playing in solo play, you’ll be teamed up with two synthetic partners (Alpha and Beta). These AI partners seem to use either Gunner or Demolisher classes. They sometimes appear a bit too helpful on earlier missions by shooting enemies just as they appear on screen. Once you start to get into the later missions, the AI flaws start to show however. They can get stuck behind walls at times. They sometimes just go charging straight into a fight without even trying to avoid enemy attacks. The AI partners often were the first to die in my team and once they die, all enemy attention is focused on the human player. The AI also never tries to perform objectives such as interacting with a console – all objectives are left up to the player. The AI in solo play is very much a mixed bag. For the most part, the AI partners do help, but when they start to mess up in later missions, they will totally bring you down with them.

No matter how you choose to play, this game gets super intense even on normal difficulty. The xenomorphs will very often crowd your team toward the end of each mission and leave you scavenging for ways to fight them off. Thankfully, you gain access to extra items such as mines, turrets and ammo upgrades that can help when the going gets tough. The missions start to get easier as you level up your character classes and can get access to better guns. The game has five levels of difficulty to choose from (casual, standard, intense, extreme, insane), so there is quite a bit of challenge to be had. The difficulty descriptions actually tell you that AI partners are “not recommended” for the last three difficulties. Friendly fire is turned off starting in the two lower difficulties and then the guns start to deal increasingly heavier damage to teammates in higher difficulties. 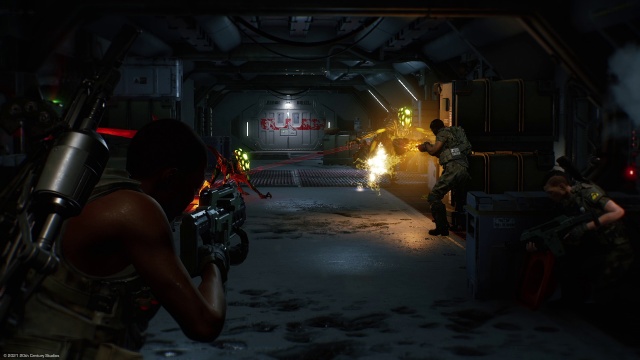 There is a lot of customizations to unlock in this game. Each mission has a hidden chest that will unlock some bonus upgrades and customizations and you also unlock items by completing campaign missions. Challenge cards can be equipped to get a boost in experience and money earned at the end of each mission – complete the required challenge to get the bonus. There are also “Tactical Opportunities” that change from day to day that will give you extra unlockables for completing the required tasks.

It’s really too bad this game doesn’t offer more missions. It feels overall too short once all missions are completed. The final mission is a total blast to play with its sheer level of intensity, but game could really use some extra missions or some type of campaign DLC. Once all missions are completed, you’ll unlock a horde mode (your team vs enemies) and a point defense mode (defend points against enemies). Strangely, the game doesn’t have an option to exit from the game when pulling up the pause menu. In order to exit from a game, you have to turn off the game during gameplay. I never noticed any indications for autosaves and there is no way to save manually. It seemed to always save after I made any changes to gear, bought something or completed a mission. Thankfully, I never did have any problems with stuff not being saved or save corruption.

If you’re in the mood for a game that delivers the kind of action you see in the Aliens movie, I think you’ll enjoy this game. It’s not as good as Alien Isolation, but it’s definitely had a lot of love put into it. The game reminds me a lot of the World War Z game, which I was a big fan of, only it’s in the Alien universe. The game is not perfect, but I had a lot of fun with it and will continue to for quite a while.

The Bad:
- Not enough missions
- Painful slowdown on a certain mission
- AI partners in solo play aren’t always helpful
- Why don’t the characters move their mouths when speaking?

Final Rating: 75% - If you’re a fan of the second Alien movie, I have a feeling you’ll enjoy Aliens: Fireteam Elite just like I did.