When I first reviewed Tony Hawk's Pro Skater 1 + 2 (THPS1+2) on PlayStation 4, I was impressed with how the game took full advantage of the PS4 Pro’s graphics power. That was five months ago, and it’s obvious that the team at Vicarious Visions has spent the interim time taking things to the next(gen) level. The game runs smooth as butter in 4K at 60 FPS, and not just with last-gen graphics. The textures are more detailed, especially for the skaters, and the lighting and atmospheric effect are even more impressive this time out. This is apparent from the very start as you enter the iconic warehouse level. The light streaming through the windows thirty feet above streams through the dust and lands on the brick walls highlighting the grit of the mortar. It all looks so natural that you almost won’t notice it at first.

This is not just an upscale of an upscaled remaster. It’s a next-gen game. And yet it doesn’t break anything from the originals. It’s truly a testament to the original Tony Hawk Pro Skater games that the core gameplay holds up so well a couple of decades later. If you have been gaming long enough to have experienced the original games, you’ll be able to jump in and find that your muscle memory is able to take over without missing a beat. If you’re new to the Tony Hawk games, you wouldn’t know that you’re playing a remake. The game could easily pass for a 2020’s title if you were none the wiser. In either case, you’re a little rusty or new to the experience, the game provides an excellent tutorial to ease you (back) into things. It will walk you through the basics and into more advanced tricks so you’ll be able to go when you (re)enter the warehouse. A little feedback on why you failed during your attempts to fulfill a particular lesson would help here, but it’s still nice to be walked through the game’s trick system before being thrown into the fire.

THPS1+2 keeps the original progression of the original THPS1 and THPS2 in separate tracks, but you’re free to jump between the two at your leisure. Unlocking the next level in both tracks requires that you complete a subset of the challenges on the current level, but it leaves it up to you as to which ones you want to go for to do that. You’re not going to find your progression coming to a halt because you just can’t quite clear a gap. And although the levels are aligned along their original sequences, the game is a unified experience – this is not one of those games that makes you back out to a title menu and load up a separate game. The challenges are taken from the original game – finding all of the letters of the word “SKATE” and collecting them, etc. – and like in the original game you’ll have two minutes to complete as many goals and score as many points as possible. If you want to enjoy the parks without any pressure, Free Skate mode allows you to skate as much as you’d like. 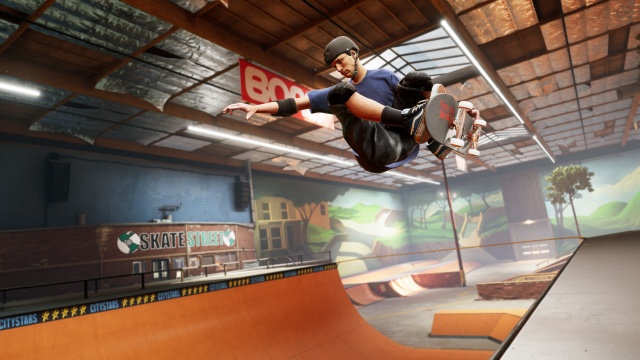 Once you’ve honed your skills opening the levels, you can continue to play them as you try to chase down the hundreds of challenges in the game or you can put those skills to the test against other players. The game supports a number of multiplayer match types each with their own objectives. Some are straightforward in that the highest score or combo score takes the win, but some modes mix the gameplay up to make things different than if you were just skating for a high score on your own. Tag has players taking turns to see how long they can avoid being tagged by the other players, while Graffiti has them competing to tag parts of the level. I found the multiplayer matches enjoyable enough for an occasional diversion and I can see this mode being a fun place to hang out with friends who are into the games as much as you are, but personally I enjoyed spending most of my time with the solitary challenges provided by the game.

THPS1+2 has extensive customization options that extend beyond the skaters and their boards. Every trick and combo in the game can be remapped to your liking, and you can set the special tricks available to each skater, but the star of the customization show here is the park editor. Create-a-Park gives you a blank canvas and all the tools that you need to create the park of your dreams – or of other gamers’ nightmares should you choose to share it online. It’s pretty easy to select items, and then size and shape them to your liking. The hardest part is deciding what you want to do with all of design freedom that Create-a-Park affords you. 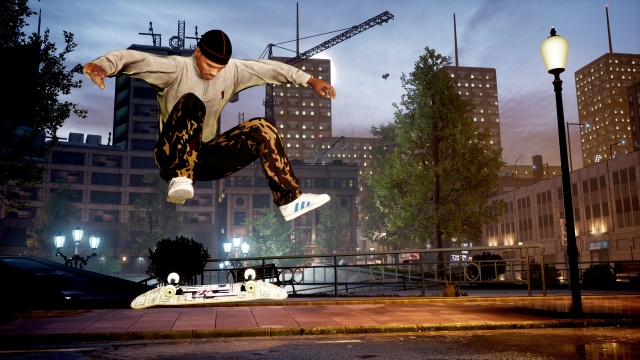 Tony Hawk's Pro Skater 1 + 2 pulls off one of the hardest tricks of all – providing a game that will appeal both to those who have fond memories of the original and those who are playing a skateboarding game for the first time. The controls are tight and responsive, the animations smooth and realistic, the levels are a joy to skate, and on Xbox Series X|S, the game is on a whole new level graphically. The game is a true and fitting tribute to its legacy, as well as a skating game for the new generation.