Immortals Fenyx Rising puts you in the role of the lowly shield-bearer Fenyx who suddenly finds herself the last hope of both mankind and the gods. The powerful Titan monster Typhon has escaped the prison created for him by Zeus, turned humans to stone, and stolen the gods’ essences making them powerless to stop him. Fenyx manages to survive the calamity while washing ashore after a shipwreck, and finds herself on the shores of the Golden Isle. The island was once the domain of the gods, but it is now their prison as they have been transformed into powerless shadows of themselves when their true essences were locked away in vaults by Typhon. With the help of a certain trickster who also managed to escape Typhon’s wrath, Fenyx must find and use the weapons of the gods to free the transformed gods and put a stop to Typhon’s plans.

The game’s story is actually framed as a story within a story, a tale told by Prometheus to Zeus when the god comes to him for help against Typhon. They make a bet of sorts in which Zeus will free Prometheus from his punishment if he can prove that Fenyx is capable of stopping Typhon. Prometheus’ voice provides a constant narration of the events in the game as you play, frequently interrupted by Zeus as the god cracks bad jokes, attempts to make changes to the narrative, and generally tries to spin the mythological events referenced in the game to reflect himself in a better light. It’s a narrative device that’s rare in games, but it works really well for a game as steeped in mythology and legend as Immortals Fenyx Rising. It’s also a vehicle for injecting additional humor into a game that never does take itself too seriously, and it’s probably safe to say that the Princess Bride served as an inspiration for the storytelling in the game, at least to some degree. Despite the humorous tone, though, this is a game that really knows its subject matter, and those with more than a passing knowledge of Greek mythology will certainly appreciate the humor at a deeper level than those who will merely enjoy it for its witty writing and pop-culture references. 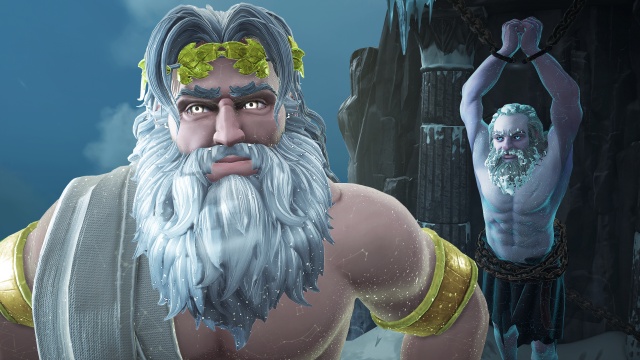 The game draws inspiration from a number of sources for its gameplay, which on the whole isn’t too much of a departure from Ubisoft’s other open world games, most prominently those involving some sort of assassin. The addition of puzzle dungeons, “vaults” in the game’s parlance, adds an element to the gameplay more reminiscent of games such as Darksiders or Breath of the Wild than other Ubisoft open world offerings. The open world here is a bit smaller – you’re on an island, after all – but it’s absolutely packed with puzzles, side quests, and challenges. In Immortals Fenyx Rising you can reach any location that you can see, and it pays to explore every last nook and cranny of the island.

Traversal is one of the game’s core features, and you can scale just about every surface in the game. The game doesn’t rely on “golden paths” which you must follow to safely reach the top, but rather uses a stamina mechanism to force you to be smart about the routes you choose. Climbing, as well as other means of traversal, drains your stamina meter, so when you approach a large surface to be scaled you need to look for the small landings and ledges that will allow you to rest and recharge or make sure that you have a full allotment of stamina potions on your belt. Other means of traversal, such as swimming or sprinting on foot or mounted, also rely on your stamina meter for power. It would be remiss if a game with so much verticality didn’t give you a fast way to get back down, which Immortals Fenyx Rising does with the wings of Daedalus. They allow you to glide down from great heights, soaring great distances if you so choose, and factor into other traversal maneuvers like extended double jumps or aerial attack combos. I often found myself determined to close the distance to a waypoint by a long glide, only to be distracted by something I sighted on the ground below that was simply far too enticing to bypass without dropping out of the sky for a closer look. 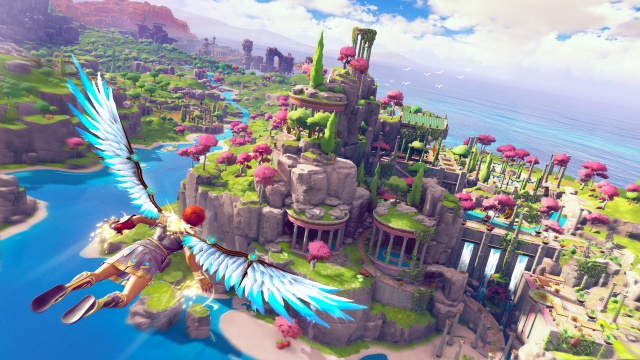 Combat – and the game’s puzzles – rely heavily on the mythic weapons and godly powers that you acquire during your adventures. The basic trio of weapons include a sword for swift light attacks, an axe for sweeping heavy attacks, and a bow for ranged strikes, but you’ll be able to wield additional weapons such as a hammer that adds knockback to its heavy hits. God-like powers include the Strength of Heracles, which allows you to grab and throw boulders. To be successful in battle, you’ll have to draw upon this full arsenal because the enemies in the game are varied and have their own unique attack styles, weapons, and abilities. You’ll often face a number of foes of different types at once, forcing you to switch between your various attacks and combos (as well as your dodge and parry moves) quickly and on the fly. Battles against stronger foes and bosses can be particularly challenging, but the game has enough difficulty levels that can be changed at any time that you’ll probably be able to find the right level for your abilities. 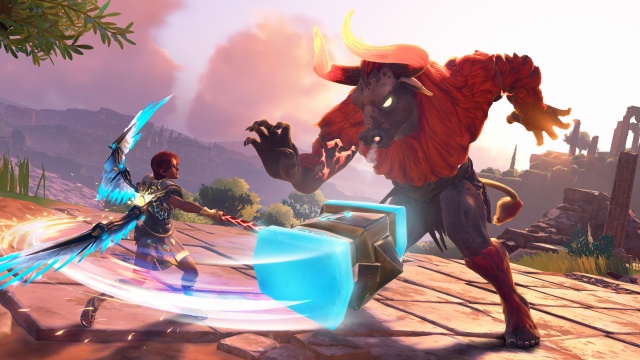 The game’s open world is filled with puzzles to be solved to gain access to treasure chests or special gear, but the largest puzzle sequences are contained within its vaults. The vaults are essentially a series of puzzles that must be solved in sequence in order to reach whatever story-related-item-that-must-be-obtained awaits you at the end. The puzzles in each vault are all variations of a particular mechanic or theme that increase in challenge as you make your way through the vault. Most vaults are not that large in size and feature about a half dozen puzzles and there are only a handful of mechanics in the game, so most of the time you’ll spend solving the game’s puzzles will be spent determining how to apply those mechanics rather than working out unique puzzles. You’ll quickly learn to look for blocks and pressure plates or torches and arrow targets as a first step each time you’ll encounter a puzzle. Sometimes this is fun, sometimes it feels a bit tedious, but overall it’s more pleasing for those who prefer their puzzles to be straightforward rather than for those who prefer mental challenges. 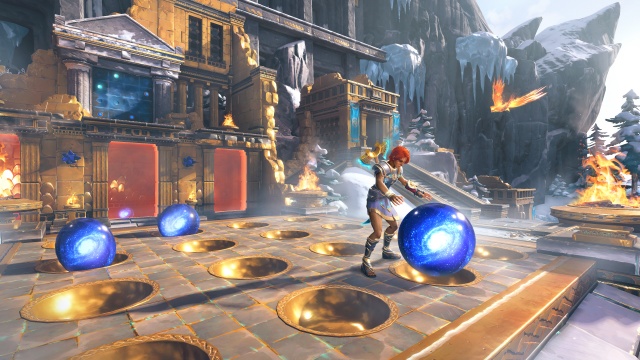 I enjoyed exploring the Golden Isle and finding the many challenges and secrets that are packed into it. Each god’s zone really has a unique look to it, from Aphrodite’s verdant, idyllic landscape to the harsh Mars-like red sands of Ares’ battle-scarred zone, and that really gives the island a lot of character. The story is also enjoyable; it manages to be clever and humorous while still delivering an emotional impact at the right moments. And as someone who has always had an interest in mythology, I really appreciate that the game’s connection to the myths behind its story run a lot deeper than a cursory nod to the subject of its inspiration. I found the combat to be gratifying in that it forces you to vary your tactics and size up your foes’ strengths and weaknesses rather than serving up an exercise in button-mashing. On the negative side of things, the “go anywhere” traversal philosophy means that you’ll spend a lot of time traversing, and I often found myself looking at a large obstacle to climb as more of a chore than a challenge. And lastly, while I did enjoy some of the puzzles, I wish they were more challenging and employed a greater variety of mechanisms. Personally, I’d rather spend time thinking about how to solve a puzzle rather than looking for the triggers that I know are needed to solve the puzzles. Overall, though, there’s plenty of gameplay here wrapped in a good story and imaginative environment to please most fans of open world action games. It’s hard not to have fun with a game that has so much fun with itself.