Far Cry 6 is set on Yara, a fictional tropical island inspired by Cuba. Yara is ruled by a dictator, Antón Castillo, who presents himself as a man of the people but in reality, is a ruthless man who will do anything to hold onto power. When Castillo’s scientists discover a method to modify tobacco plants so that they can be used to cure cancer rather than cause it, Castillo sees an opportunity to vastly increase his wealth and influence. He decides to go all-in on the program, using his captive population as a labor pool. The production process involves dangerous chemicals that put its workers and the environment at great risk, so Castillo resorts to forcing people to work at the farms and facilities, taking them right off of the streets and having anyone who resists shot.

As the game opens, Castillo’s troops have begun sweeping the streets of Yara’s capital city for slave laborers. Dani Rojas, who you will play as throughout the game, is watching the chaos in the streets from a rooftop vantage point with a pair of friends. Far Cry usually casts you in the role of an outsider unexpectedly thrown into a dangerous situation in an unfamiliar land, but this time you’re a local witnessing chaos in your home country. Like the Far Cry protagonists of before, Dani’s initial goal is to just get out of there, hoping to find passage on a boat bound for Miami. Those plans are soon derailed and Dani is instead deposited on Isla Santuario, a small island off the coast of Yara. This island is home to what’s left of Yara’s resistance movement, and Dani soon falls in with the rebels in the hope of exchanging help in a few operations for passage off of the island and to the US. While learning the ways of a guerilla warrior, Dani soon gets swept up in the revolt against Castillo and becomes a leader in the struggle to free Yara. 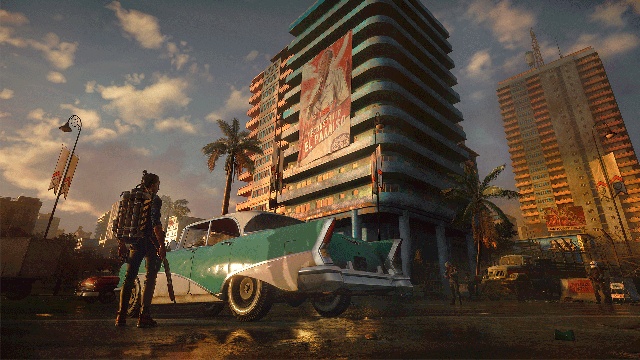 Your time on Isla Santuario serves as the game’s opening chapter and a tutorial of sorts for the game. I say “of sorts” because it will take you several hours to get to the ultimate battle that will break Castillo’s blockade of the island, so this is more than a ten-minute introduction to a few game mechanics. You’ll learn the ways of a guerilla fighter – how to recognize trail markings, talk to the locals to gain intel, craft improvised weapons, and make the most of what you have against a superiorly armed enemy – as you complete a series of introductory missions that are far from a cakewalk.

Once you break free of Isla Santuario, the game settles into a more familiar Far Cry experience. Yara is divided into regions, each of which has its overall difficulty level tied to a minimum player level. Each region is also ruled by one of Castillo’s lackeys and as you complete missions and activities in a region you’ll loosen their control on their region. Once a leader is weak enough, you’ll be able to face-off against them with complete control of the region on the line. Taking out Castillo’s lieutenants will weaken his grip on the island, and eventually leave Castillo’s fortified home region and the leader himself exposed to attack. This familiar Far Cry game model works well enough for a guerilla revolution, but after you play through Isla Santuario, it’s a bit disappointing that the more open freedom that you’re afforded on the opening island wasn’t extended to Yara as well.

The game does give you the freedom to approach each mission or target of opportunity in whatever way you’d like. You can walk though the front gate with guns blazing or take a far more stealthy approach – although in my experience the latter tends to work a lot better, While there is some room to experiment, you’ll probably find yourself developing a routine to tackle each enemy-controlled objective – find some high ground to tag enemies with your binoculars, look for the hole in the fence or a pile of crates outside a wall and enter the restricted area, disable the alarms, and then try to pick off as any enemies from behind as you can before the shooting starts. There are story missions that add some interesting variety to the routine, but Yara’s a big place and filling it all with content leads to some inevitable repetition. 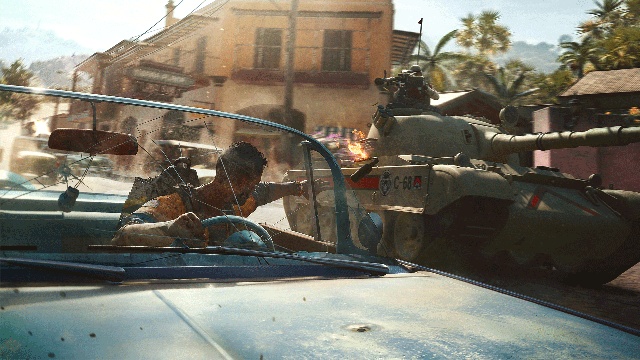 Far Cry 6 tries to add some additional tactical depth to the game by introducing different types of ammunition in the game that are more effective against certain types of enemies than others. The idea was probably to force you to think about what type of enemy you’re attacking rather than blindly firing at everyone – as well as finding a way to supplement the crafting system. Far Cry 6 abandons the whole animal-based product craft items and so has you crafting different types of ammunition instead. This idea may have worked well if Far Cry 6 was a different kind of shooter, but in this game you’ll often find yourself fending off multiple enemies at once and the last thing that you want to do in an intense firefight is to force to continually switch your ammo type.

For all of it’s attempts to appear like a guerilla warfare game, Far Cry 6 is still very much a Far Cry game. How likely do you think it would be for a few guerillas to capture and disable a pair of navy destroyers? The crafting system allows you to create makeshift weapons known as Resolver weapons – weapons such as flamethrowers and electric arc rifles that you can create from the scraps that you scavenge around the island. The ultimate Resolver weapon comes in the form of a backpack that you can configure to perform different functions such as firing rocket salvos or acting as a jetpack. Making the backpack even more of a shooter fantasy weapon is the fact that the backpack’s functions operate as a super which is charged by killing enemies.

Far Cry 6 changes your relationship with the animal kingdom. Once the source of rafting materials in far Cry games past, they are now companions in arms. Far Cry 5’s Guns for Hire are now Far Cry 6’s Amigos for Hire. There are a number of different animals that you can obtain during the game, each with their own unique set of capabilities. You’ll gain your first companion early in the game on Isla Santuario an alligator named Guapo that you can sic on your enemies. Not all of your potential companions are all teeth and claws, though. A two-legged beagle named Chorizo can be used to distract enemies with its cuteness. None of these companions will be as much help as a friend joining your game in co-op, but they are a useful way to turn the odds a bit more in your favor despite their gimmicky nature.

The video game gimmicks extend to the game’s gear system, which borrows a lot from RPGs. Different headgear, gloves, shirts, pants, and shoes will confer different bonuses and stat modifiers when worn, and additional bonuses can be gained if you gear up with a complete set. Depending on your mission objectives you may want to change your outfit first. A guerilla must dress for success after all. 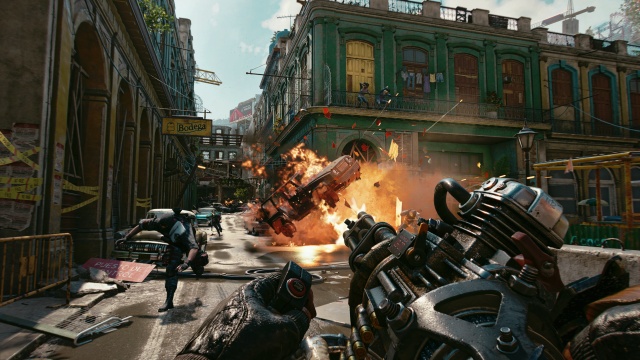 Far Cry 6 allows you to take control of a variety of vehicles, aircraft, and watercraft. While you can commandeer everything from a motorcycle to a tank, you’ll also have the ability to call in vehicles from the guerilla camps, or to call for a car, complete with a trunk full of ammunition, from anywhere near a road. You’ll be able to upgrade the vehicles that are available when you call one in, as well as add different weapons and equipment to them. While a light plane can cover large distances quickly, you’ll often find it advantageous to travel on horseback – horses can easily follow jungle trails and aren’t subject to anti-aircraft fire.

There are a few twists to Far Cry 6 that make it a little different than the previous few Far Cry games, but overall, the gameplay doesn’t stray far from the formula. You can have some fun with the game, but it’s hard not to notice that you’ve played all of this before.

Final Rating: 78% - A little different spin on things, but it's still a Far Cry game.