So I need to begin this review with the caveat that I never played Blood Bowl. In fact, the only really evidence that I have that Blood Bowl existed is that there is a '2' appended to the title of the game that I played for this review. This means that if you're looking for a compare/contrast review for this game vis-a-vis its predecessor, then unfortunately you've come to the wrong place. On the other hand, if, like me, you were curious about a game that features teams of orcs and elves squaring off against each other to play football, then you've come to the right place.

The first thing that you should know, if you didn't know it already, is that Blood Bowl has its genesis in a tabletop miniatures game. Blood Bowl 2 on the Xbox One game respects these roots, and in many ways tries to recreate a tabletop game experience. This means that you have what amounts to a turn-based sports game. The field is divided into a grid of spaces and players are essentially units, each with their own set of action points per turn and unique special abilities. Everything that you do, and every step of that everything, is accompanied by a die roll to determine whether you've succeeded and can continue along your way or you've failed and your plans come to a screeching halt. This is par for the course for turn-based battle games, but when applied to a sports game it feels, well, a bit odd.

Teams alternate turns, and when it's your turn you decide which of your players that you want to move, have that player go through his moves, and then decide who you want to move next. Obviously, this is nothing like what happens during an actual football game. If you're looking to play Madden with a team of orcs, then you've come to the wrong place. The game is more of a chess match in which you need to think a couple of turns ahead and take the time to think about the adjustments that you need to make to your strategy after your opponent moves. 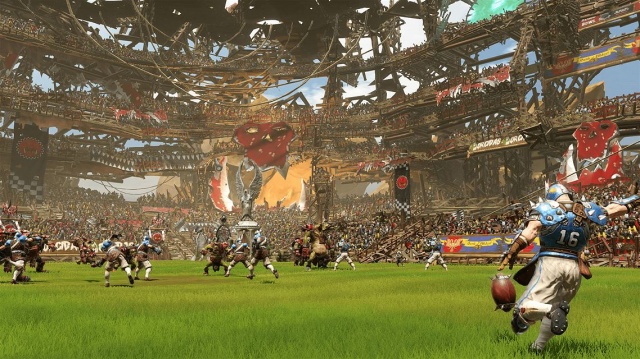 Now while I would have certainly loved to hit the front four of an elf defensive line with an orc fullback plowing ahead at full-steam in real-time, and a turn-based sports game seems more like an oxymoron than a game genre to me, I've certainly played my share of turn-based strategy games and so I played Blood Bowl 2 with the approach that it was a strategy RPG. If you're familiar with that game genre, then you'll be familiar with the flow of play in Blood Bowl 2. Each player will have a limited number of moves and actions available when active based on the player's race, position on the team, and such. The difference here is that in a typical strategy-RPG the number crunching is done silently behind the scenes and a number of efforts are made to streamline the gameplay. That's not the case in Blood Bowl 2, in which just about every step that you take is briefly interrupted for a roll of the dice. Roll to see if you can enter a square without getting knocked down, roll to see if you can leave that square without getting tripped, roll to see if you can push your player to move an extra square. A player was tripped? Wait until next turn and then roll to see if he can get up. And most of these actions are accompanied by slow-playing animated sequences that can't be skipped. All of this adds up to make for games that are very slow-moving and time-consuming, and the time it takes to complete a match is measured in hours rather than minutes. The game really would benefit from taking a cue from sports and giving you the ability to give players assignments. I'd prefer to order a player to block an opponent and then have that player do what he needs to do to try and execute the block. Can you imagine that instead of telling a receiver to run a flag route, a quarterback would have to tell him, "OK, on this play I want you to take one step forward, and then take another step, and then take another step, and then take a step to your right..." ?

The game's single player campaign puts you in charge of a team at the bottom that must claw its way to the top one game at a time, a process that will take a dozen plus matches to accomplish, assuming that you win each one on your first try. While the AI isn't the craftiest of competitors, a bad roll of the dice or a poorly timed random event can easily put you into a hole that you won't be able to climb back out of. Although this is a game styled after American football, the scoring is more like that of soccer, which matches ending with scores like 1-0. While the game has some fun with its campaign in the persons of the two sports anchors who will chronicle your season between matches, on the whole the campaign feels like a very extended tutorial designed to teach you all of the nuances of the game before you attempt league play. 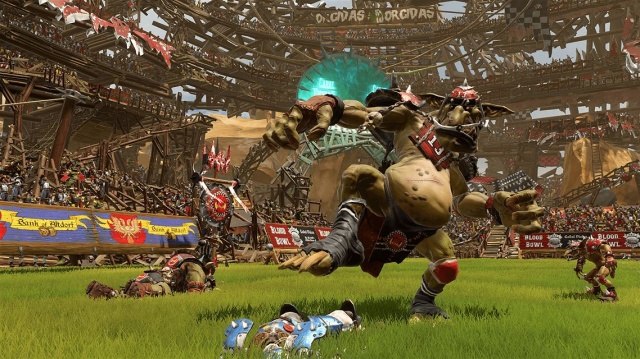 League play opens up your team options so that you can select your team's race and customize things like your team colors. The races don't seem entirely balanced though, so choosing the wrong team can make things a tougher go for yourself. League play is essentially a franchise mode in which match experience can lead to improved stats for players, or conversely injury (or death) as well, and that can be played solo or online against other players. Solo play puts you up against the same lackluster AI you face in the campaign, and multiplayer play can be an exercise in frustration in trying to find matches and leagues to join. It's probably best that you already have a group of friends that are into the game.

Overall, it seems to me that Blood Bowl 2 is focused on recreating the board game experience to a fault. Easing the learning curve and significantly improving the pace of play would have made the game more accessible to gamers who haven't already spent hours playing the board game, or who don't have hours to commit to a single match in a sports game that can pretty easily end in a 0-0 tie. Perhaps I would have felt differently about the game if I had some history with its original board game incarnation, but for me the hours that you'll need to invest in Blood Bowl 2 simply aren't worth the payoff.

Final Rating: 60% - Football at the speed of slow.