Vampyr is a gothic action/RPG developed by DONTNOD Entertainment. Vampyr takes place in 1918 London during the time of the Spanish Flu. It's very evident that the developers did their homework by gaining information about the time period because the overall setting and atmosphere is luscious. I actually felt the time period through the suffering people and overall sense of dread that I would find along the streets of London. There is always that feeling that there is something wicked around dark corners and this time, that is sometimes true!

The main story centers around a doctor (Johnathan Reid) who wakes up to vampirism and has to learn to live with it. Johnathan is a famous doctor, around the London area, that currently works with blood transfusion. One of the best parts about the game is that you actually get a feel for Johnathan having to come to terms with his vampirism through the choices he (you) make. You basically shape the story of Vampyr through the choices you make. You get to choose who lives and dies. Will you continue on with your doctor ways and help people and use your new vampire powers to help them even more than your human self could or do you turn to your inner urges and help people only to nurture them back to good health in order to make their blood value even greater for when you feed off of them?

I have not played either of DONTNOD's "Life is Strange" games but I hear they are heavy on dialogue and choices and this is definitely the case in Vampyr as well. Players that pick up this game need to be aware that a good bit of the game requires you to go through several query options with local residents of each district where you'll go through tons of in-game dialogue. You'll get many "small talk" conversation options when first approaching each person and you'll unlock other conversation choices as you engage in deeper conversation or find certain objects that allow you to question certain characters. Basically, you'll want to meet up with characters multiple times to make sure you get all dialogue use from them. Along with conversation options, you can heal a character that is sick (if you have the right equipment) or mesmerize them away from the public eye in order to feed. Character conversations give you details about each specific character's attitudes and their ways and you get a good feel of each character through speaking with them so the conversations are actually interesting, but the amount of conversations that you'll have available to you at one time (as you enter a new district) can be quite overwhelming and get a bit repetitive from time to time. 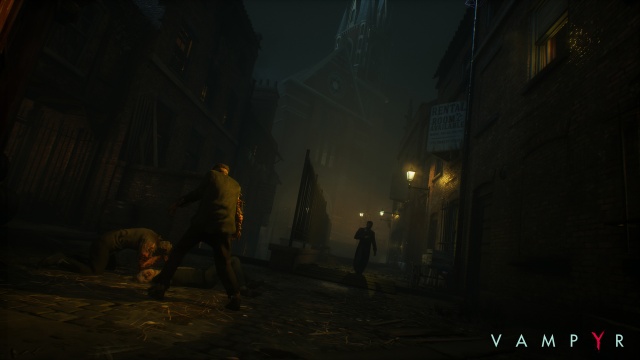 The overall depth of Vampyr is not realized until you start to move to more districts. You get control of the health of a district based on your action. The game has a total of four districts and is semi open world. Each district will be given a rating based on the overall health of the citizens (characters you can speak with). Feeding on characters or healing them will help to decrease or increase the overall health of the district. Each character has their own individual health as well. You can develop cures for illnesses that they might have. Having a character in good health will increase their overall blood quality. Blood quality serves as XP earned when feeding off a victim. If you choose to not feed, you can still gain XP by helping characters and battling enemies out on the streets of London.

The feeding sequences in the game are so very well displayed. Every character has a certain level and you have to be at their level or over the level in order to mesmerize them during conversation. Once you do so, Johnathan will whisper into their ear then this really cool chanting music theme will play while the screen turns red as you lead them out of public eyes in order to feed on them. The sound to Vampyr is a thing of beauty and really helps to emphasize the overall atmosphere in the game (both horror and time period).

A lot of morality comes into play with how you base your decisions. Will you kill a character that is abusing others? What effect will killing that character have on the rest of the citizens of the district? Sometimes it seems like there is no true moral choice, but just a choice that is "less bad" than another choice. Besides district choices, you also get choices with main characters and can actually kill them off if you want.

The game's combat is overall good but it never completely reaches the point of feeling fantastic. You'll get to choose from several weapons, either two-handed or one-handed weapons in each hand. Johnathan has an HP, Blood and Stamina bar and the combat is very similar to Bloodborne. Your focus is more on dodging attacks rather than blocking through a certain vampire power option. Just like a FromSoftware games, it's important to keep an eye on your stamina gauge so that you can still perform actions. The Blood gauge is used for vampire powers and can be replenished by feeding off of stunned victims or finding a weapon that causes enemies to drip blood. You can also feed off rats in between battles! As you level up, you'll be able to unlock many unique vampire powers, such as creating a mist below enemies and causing a blood spike to shoot up out of the ground or using your claws to strike enemies for greater damage. Players can also heal by using blood as well. 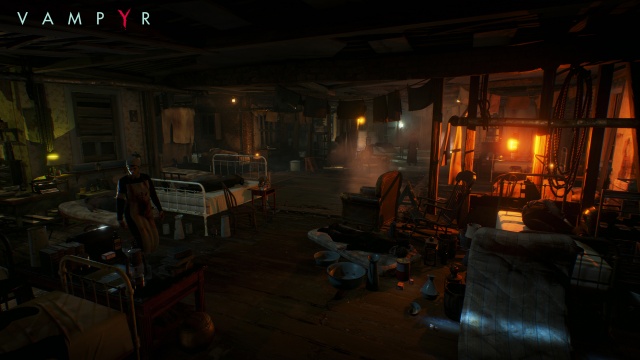 You get access to melee weapons and guns. You can equip a primary weapon and a secondary weapon or wield a two-handed weapon. All weapons have their own unique properties, such as stakes that increase stun damage and set up feeding opportunities, knives that replenish your blood meter per hit, among others. Guns allow for long-range damage and they all have certain amounts of ammo that can be carried - ammo can be replenished in upgrade rooms. Two-handed weapons allow players to parry attacks. Parrying an attack will stun an enemy to set up an instant feeding opportunity.

The majority of enemies are vampire hunters and Skal (low level vampires) but you do eventually run into different types of vampires. The good part about the enemy variety is that you'll run into several different types of hunters and Skal, so you'll have to constantly learn how to approach different battles. The majority of enemies can be skipped by running by them, but sometimes it is rather hard and every now and then you'll run into a sort of mini boss enemy that will seal off your exits and you'll be forced to engage in combat. Some of the fighting areas can get frustrating with how you can get pushed into narrow corners as enemies crowd around Johnathan and sometimes the camera has trouble displaying a good view since you're trapped in a corner.

Enemies all have their own levels and so do you. Johnathan levels up as you spend XP to upgrade your abilities. Levels play a very important role in combat. If you go into an area with high level enemies, you'll get your ass handed to you in the damage department if they manage to hit Johnathan and you also won't be able to take much damage from them when you hit them. Very early side quests are hard to handle because of high level enemies so you either have to get quite skilled in combat or level up through feeding in order to engage in some of the more early side quests. Feeding off characters makes the overall game easier, but it also lowers the status of each district.

In between your exploration, you can rest at rooms that allow Johnathan to level up at a bed or develop new items at a workbench. Materials can be scavenged from enemy drops, exploration or bought at shops in order to create new items or weapons or upgraded existing weapons. Workbenches are where you can develop cures for illnesses as well. One problem the game has with merchants is that you don't know what materials you are lacking when at the shop, so you have to remember what items you need or write them down ahead of time before visiting the shops. It would be nice to have a separate menu that would show the items that can be created with the available materials at each shop so you can see your options and what you already have and don't have.

Vampyr is a great rpg action game for those that want a good horror RPG that is very character focused. You REALLY have to enjoy in-game conversations to get the full enjoyment out of the game so keep that in mind. The amount of history and opinions through science that this game brings to table to explain vampirism and health issues is quite intriguing and help it stand out from many other vampire games. It's easy to get caught up in the overall world that Vampyr introduces and the RPG system and combat is just enough to keep the action areas interesting. Even with the few problems that I found, Vampyr is a very solid action-RPG.

The Bad:
- Even with all the combat options, the gameplay has a mediocre feel
- The game needs a mini map
- Shops often feel useless if you don't keep up with exact materials needed (through memory or writing them down)

Final Rating: 80% - Vampyr is quite a unique experience from your usual vampire game.