Plants vs. Zombies Garden Warfare 2 is both something new and more of the same. On the single player side, well, there is a single player side in the sequel, something that was absent from the original game. On the multiplayer side, there are some new maps, modes, and character types, but on the whole the multiplayer matches still play and feel a lot like they did the first time around. The game's core of a humorous and bloodless class-based multiplayer shooter is still very much intact, though, and that core still delivers a fun experience.

The first Garden Warfare game was all about the multiplayer action, and you didn't have any option to try out and become familiar with the strengths and weaknesses of each character class other than to enter the fray and learn while under fire. This time out the game starts you off in a large hub world known as the Backyard Battleground. The plants have a base on one side and the zombies on the other, and in between is a large suburban neighborhood that serves as the hub's namesake. While you begin the game as a plant, you're free to switch to a zombie at any time, and to switch back again whenever the mood to do so strikes you. The bases serve many purposes, giving you access to quest line missions, a portal into the multiplayer modes, a sticker shop for upgrades and customizations, and more. You may be thinking that those quests are simply multiplayer battles fought with and against bots. While that's basically the case for a few of them, there's a surprising amount of variety to them and you'll face a much larger variety of enemies than you will in the multiplayer matches, including bosses. Not only that, the enemy AI is actually pretty good and will provide you with a nice challenge. The quest missions are fun to play through simply for their own sake, but they also give you a chance to experiment with the classes available in the game, both classic and new to Garden Warfare 2, pick your favorites, and then develop some skill in using them. In addition to the quests there's plenty to do in the Backyard Battleground zone, exploring for hidden areas, chests, or collectibles, playing mini-games, battling the wandering plants/zombies, or trying to survive a wave-based attack mode. There are hours of gameplay here, even if you just stick to the quests, but you can jump into multiplayer at anytime. Everything is left open-ended, so you're not forced to play through the quests if you don't want to, and conversely you can play the game for hours without ever jumping into the multiplayer. 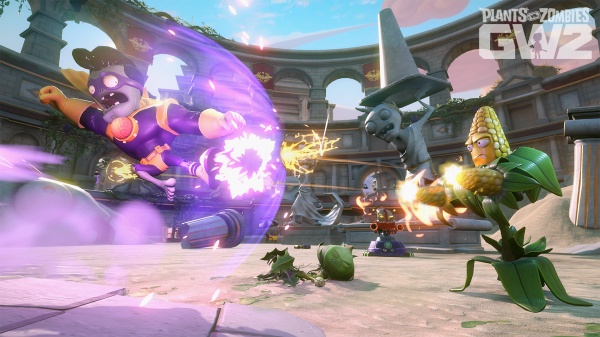 When you're ready to join a multiplayer match, you'll need to visit the multiplayer portal in one of the bases. The previous game would ping-pong players back and forth between the plant and zombie sides between every round, but now you can pick your side and you'll stick with it until you return to the Backyard Battleground hub. Before entering the multiplayer portal you can pick the game mode that you want to play or join one of the two special play lists, one designed for beginner players and the other that randomly shuffles between the different available modes. Maps are selected at random without any input from the players, though. The game modes include a number of team-based shooter standards like team deathmatch, kill confirmed, and base defense. The defense modes now give the zombies the opportunity to defend a graveyard in the same way that the plants defended a garden in the first game (and still do in the sequel). The new maps in the game are just as imaginative as the original maps, and they are all well-designed, with plenty of pathways and a mix of indoor and outdoor locations. The new Moon Base Z map even gets a little playful with gravity itself.

As for the player classes, there are three new classes per side. For the plants there is Citron, Kernel Corn, and Rose on the side of the plants, and Captain Deadbeard, Imp, and Super Brainz for the zombies. Citron is a high-health tank class, with a shield ability to absorb even more damage. The ability to absorb damage comes at the price of a weak primary weapon. Kernel Corn doesn't have the high health of Citron, but his dual Cob Buster weapons can deal a lot of damage in a small amount of time. Kernel Corn has the ability to go vertical with his Husk Hop ability which causes him to leap in the air raining down rounds from his Cob Busters. Rose is a wand-wielding magic user whose primary attack consists of thorns fired from her wand in the form of Magic Thistles. Her special magic attacks can render herself invulnerable and be used to turn zombies into goats for a short period of time.

Captain Deadbeard is a sniper class whose versatile main weapon switches to a shotgun mode for close range and a sniper rifle for long range. All pirates need a parrot, and Deadbeard's Parrot Pal ability provides him with a weapon laden eye in the sky. The Imp is a very weak character who makes up for it with speed and a very powerful special ability. Robo Call summons a mech for the Imp to pilot, turning him into a heavily armored machine armed with lasers and missiles. Super Brainz is primarily a melee brawler whose basic attack is a powerful punch. In addition to a special kick attack, he can also fire off a Super Ultra Ball energy burst to deal damage from a distance. 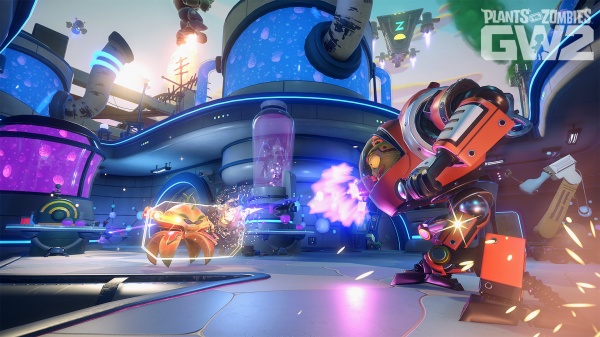 As you play through the single player missions and complete multiplayer matches you'll earn coins that can be spent to buy sticker packs. Sticker packs can contain "stickers", which are used to unlock variants of the playable classes in the game. Complete the set and you'll unlock the variant for use in the game. These variants are not just cosmetically different than the base classes, they also have variant attack types as well, such as a fire-based attack that leaves targets burning and taking damage for a short time after being hit. The packs also contain cosmetic items - glasses, wigs, and such - that can be used to change the look of your characters and make them stand out a bit from the crowd. Also available through the packs are one-time use items that can be used in a battle. These include "rooted" items that can attack enemies or heal allies, as well as mobile AI controlled minions that will help you out by attacking enemy players. The sticker packs come in both plant and zombie versions so that you can ensure that the upgrades are all usable while playing on your favorite side, and they also come in different grades that increase your chances of getting a rare items in a pack. Now you're probably thinking that all of this is rigged so that you'll only be able to earn enough coins for the basic packs and will need to resort to in-game purchases for the top-tier packs, but that's not the case. With regular play I was able to afford the top-tier packs on a pretty regular basis, and to be honest I'm not even quite sure how to go about exchanging real-world cash for coins. I'm sure that it's in there somewhere, but it's not the kind of thing that's pushed onto the gamer or that is required to get the best in-game items.

As for the actual gameplay, while Garden Warfare is not as feature-rich as a game like Call of Duty or Halo it does deliver a surprisingly robust and enjoyable shooter experience. Hardcore shooter fans may balk at the lighthearted approach taken by the game, but I think it just adds some unique charm to the experience. I'd rather play Garden Warfare 2 than some other "serious" shooters that I've had to review in the past that failed to deliver on the fun factor. It's also a shooter that parents can feel OK letting their kids play. There's no blood in the game, and there's no mention of "kills" or "death", only "vanquishes". In fact, if you find yourself sometimes tiring of playing shooters that take themselves too seriously, or that are played by gamers that do the same, than Garden Warfare 2 may just be the perfect break that you're looking for.

Final Rating: 88% - A not-so-serious shooter for gamers that don't take themselves too seriously.