Along with the new Skylanders game comes a new portal, the platform on which you place the Skylanders figures, and now vehicles, to make them appear in the game. The new platform features a large silver car engine on one end with clear blue flames coming out of its exhaust ports and a slot to place a trap from last year's Skylanders Trap Team. If you add a trap to the portal containing a villain trapped in Trap Team, then you'll gain a special Skystone card for use in the game's card battle mini game and a weapon power-up for the vehicle on the portal, but the villain will not be a playable character in SuperChargers. The SuperChargers portal has a black, opaque base and doesn't feature any of the lighting effects present in prior portals, which is a bit of a disappointment. Fear not, light core figures still light up, though.

While playing SuperChargers the game will ask you to place a vehicle on the base as well as a figure even when you're not in one of the game's vehicle segments. You can use any Skylanders figure from any of the previous games on the portal, and as such in the game as well, and any of those figures can man any of the new vehicles as well. Each of the new Skylanders SuperChargers figures has a preferred vehicle, though, and pairing the two together adds bonus capabilities to the vehicle. Vehicles come in three classes, air, sea, and land, and although each one has an associated element just as the figures do, the element alignments are only used to provide bonus stats in certain areas - there are no locked elemental gates in SuperChargers. In fact, the only locked gates in the game are by vehicle type, a first for the series, which means that you'll only need to purchase an extra vehicle or two (depending on which starter set you buy) in order to see all of the game's story content. Even without those vehicles it's possible to complete the game's story, as the gated areas represent side missions or alternate pathways through the levels. 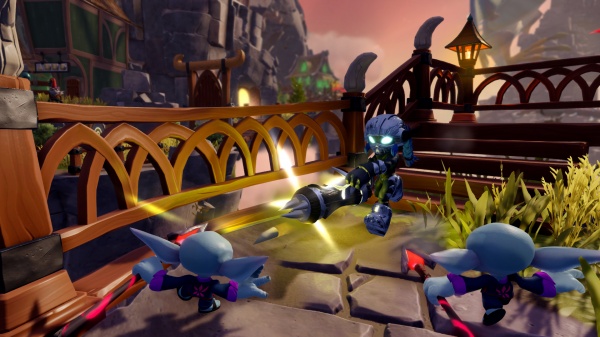 As for the new figures themselves, they are a nice step up in quality and detail from the figures from prior games. The character poses are far more dynamic than before, making the figures more exciting and capturing more of each character's personality than before. Even the character bases have been given an upgrade. In the past, identifying which Skylander came with which game was accomplished by checking out the color of the thin plastic layer on the underside of each figure's base. This year there's no doubt as to which Skylanders are SuperChargers as each one comes perched on an engine with a plume coming out from behind it that is used to identify the figure's element. Veterans of the series may be a little disappointed to find that the new figures don't come with a trading card as they did in games past, replaced by a sticker designed to be placed on the poster of all of the SuperChargers figures available that comes packaged with the starter set.

The vehicles are a first for the series, and in another first they are more playable in the real-world than the static figures have ever been. Wheels turn and propellers spin, so kids can race the cars across the kitchen floor or run in circles holding an air vehicle up high (I should point out that I really don't think that the sea vehicles are bathtub-worthy, though). The vehicles are not to scale, meaning that you won't be able to cram a Skylander figure into any of them, but they really are toys to be played with even when the console is turned off.

In another first for the series, there is not a flood of re-released figures or new minor actors that comes with the SuperChargers release. The only new figures are the 18 SuperChargers, and there are a total of 18 vehicles so that each figure has a corresponding vehicle to supercharge.

As for the gameplay itself, the story runs at about a 50-50 mix of the action-RPG/platformer gameplay the series has always had in the past and the new vehicle-based gameplay. I was very impressed with the level design for the game's worlds in SuperChargers. The Skylanders games have always had themed levels that were clever from a visual standpoint, but now that has been taken to a whole new level and the themes also have a major impact on the gameplay itself. I'd list specific examples of this here if I wasn't worried that doing so would take some of the fun out of discovering them yourself. Let's just say that they are generally quite clever and a real treat for long-time fans of the series and leave it at that. 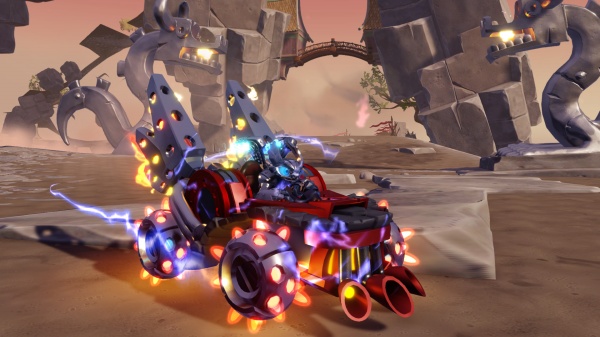 The vehicle sections are usually sprints along tracks (or air or sea lanes) in which you must dodge obstacles and fend off attackers with your vehicle's weapons. Track features such as jumps and shortcuts are common and add to the fun. While the action feels a little fast and crazy, the challenge is geared towards the younger gamer. Even if you are knocked out in a vehicle level, switching the Skylander figure on the portal will allow you to continue from where you were without losing progress (the vehicles themselves never have to be switched out). Some of the tracks lead to arena or boss battles, which provide an interesting twist over the similar battles in the on-foot portions of the levels. While co-op play is supported in the vehicle sequences in addition to the on-foot sequences, only one vehicle can be placed on the portal at a time. This means that only one player gets to drive while the other is relegated to manning the weapons. This may be a bit disappointing, but at least it means that you can play in co-op mode with any starter kit without buying more vehicles and that you don't need two of each vehicle type for co-op play.

Similar to the treasure that you can collect with a Skylander figure to pay for character upgrades, vehicles can collect gears to pay for upgrades to their weapons and shields, but the vehicles do not have the same sort of branching upgrade paths available to the Skylanders. As you play through the levels you'll find mods that can be added to the vehicles as well, and these mods will both have an effect on some of the vehicle's stats as well as change up its look in the game.

While on the topic of upgrades, I should mention that you, as the portal master, will be able to level up as well as you play the game. Each time you reach a new portal level you'll be given the choice between two bonus powers that include things like making more gears available for pick-up by your vehicles or giving Skylanders of a certain element a bonus power. It's a nice new way to reward your accomplishments in the game in a way that isn't spread across a number of figures, some of which may be carrying experience from prior games.

When you're not out on a story mission you'll find yourself in the game's hub area, Skylanders Academy. This is more than a place to buy Skylander and vehicle upgrades, though; it also serves as the jumping off point for other game activities. Pair a SuperCharger Skylander with its preferred vehicle and you'll unlock a SuperCharger Challenge mission, time-based challenges themed to each of the vehicles. The Academy is also home to the game's racing mode, kart-racing style races complete with power-ups, shortcuts, boosts, and traps. There are two tracks available for each vehicle type making for six in all, and each one is a completely unique environment filled with all sorts of crazy events and hazards that can knock you out of the lead if you're not careful. Racers can also fire their weapons at each other, and while no one is ever destroyed, if a vehicle takes too much damage it will spin out and lose a few precious seconds before it can return to the race. The races always have eight participants, up to two of which can be players (or up to four online) and with the AI filling out the remaining slots. Yes, online racing is supported, so you can challenge your friends or put your laptimes up against others on the leaderboards. Since this is a kid-focused game, online matches are restricted to friends and the chat feature can be disabled. Lastly, the Academy lets you partake in a game of Skystones or 'train' against enemies, but last year's horde mode is unfortunately absent. 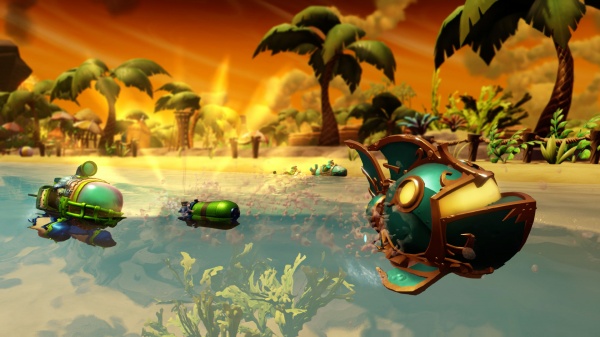 Wrapping things up, the new portal looks great when you're not playing the game, but unfortunately looks the same when you are playing the game, which is not so great (and isn't it about time that we can use the same portal for two years in a row?). The new figures are some of the best looking in the series, and the vehicles that are actually toys offline as well as in-game are awesome. I wish the figures still came with trading cards, though, and I miss my villains already. Removing elemental gates from the story mode was a great move, and the level design in SuperChargers is the most imaginative for the series to date. The vehicles are a great addition to the game, but could have used a more diverse upgrade path and additional customization options would certainly have been very welcome. And the kart racing mode is a blast, but I do miss the Kaos Doom Challenge horde mode. Overall, the plusses far outweigh the minuses here, and so SuperChargers is a must buy for any Skylanders fan.