Player(s): 1
Last year, Resident Evil HD Remaster released and if you're like me, you were hoping to see Resident Evil Zero follow. Well, Capcom listened to the fans and started work on Resident Evil Zero HD Remaster shortly after the release of the HD remake of the original. Resident Evil (RE) Zero was originally planned for the N64 and was actually started on that system in beta form and then was was redone for the Gamecube. Zero tells the story of what happened before the mansion incident and the main characters are rookie STARS member Rebecca Chambers and a convict by the name of Billy Coen.

The game incorporates RE's first partner system and I still feel this is the best partner system that Capcom has put into an RE game. You start out with Rebecca alone and eventually run into Billy. You control both Rebecca and Billy together throughout the majority of the game. You can take control of one or both at the same time. When both characters are together, the left analog moves your main character and the right analog moves your secondary character. One really cool part about RE Zero's partner system is that you can choose to leave one character behind in room so that you can play as just one character throughout most of the game just like all the RE games before Zero.

RE Zero has no item crates. Both characters can hold six items each and you can set items on the ground and leave them behind in rooms. The rooms in the game are basically your item crates in RE Zero. Each room can only contain a certain amount of items so you have to keep this in mind while laying them out. With this kind of system it's kind of fortunate that RE Zero's rooms are very connected. You'll basically be meeting up in the same areas from the starting once you get to the end. The beginning train segment is only the beginning of the game and then you get to explore a mansion-type of area. The game has the most backtracking out of the older games so if you're the type of gamer that is allergic to backtracking then you might want to consider this while trying this game. You'll have to return very often to previous areas in order to unlock doors and solve a puzzle to advance further. 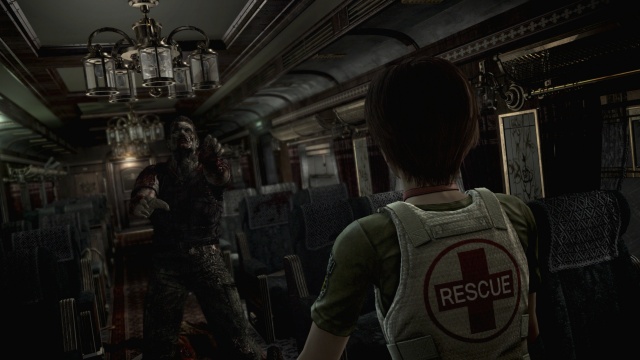 RE Zero has your usual zombie enemies, zombie dogs and Hunters, but the majority of the enemies are all new. One of the low points of RE Zero are the basic "larger animal" enemies that Rebecca and Billy run into. The Eliminator monkeys in the game are a nice touch for a new enemy, but enemies such as giant frogs or giant centipedes feel a bit lackluster in terms of creativity. About half the game's enemies are nice in design and the other half feel lazy. RE Zero definitely has some challenge - if you ask me, it's the hardest RE of the older style RE games. The game has several enemies that can grab you and damage your character and some of them can stun-lock your characters. Billy has the greater damage resistance of the two characters, but even he can't stand some of the enemy attacks very well without dropping down to caution after only a few hits. The ammo assortment in the game seems to be more limited than the remake of the original RE as well. I often have to plan out my routes to where I have to run by enemies far more than I do in the remake of the original RE.

Just like RE HD Remaster, RE Zero has been redone in high definition and it looks fantastic. I always felt that RE Zero had better looking pre-rendered environments when comparing the two. RE Zero's environments have more movement and overall environmental effects, such as the rain coming through broken windows in the train and the rainstorm and wind effects while on top of the train. The entire train segment is so very impressive in Zero thanks to the environmental effects. Along with the classic control scheme there is also a new control scheme that allows players to move in the direction that they press on the left analog instead of using the usual "tanks controls" from the older RE games. The new style seems to fit better in RE Zero than it did in RE HD Remaster to me. It just seems like the camera angles work together with the new control scheme for an overall better experience compared to the constant camera switching from odd angles in RE HD Remaster.

One annoyance that I find with the controls for the HD version of RE Zero is that they have switched all the buttons around and you can't map them out to the way they are in RE HD Remaster. For the Xbox One version, X is the inventory button, Y is character switch, A is for interact/fire, and B is for running for the classic style. I can get used to just about any setup for playing RE games, but this is really inexcusable to me. The RB button is the aiming button for most setups as well. I wound up switching to Type D that has LT as the aim button and RT as the fire button. Hopefully they will patch the game to have a control setup more like the RE HD Remaster because the current setups to choose from are really annoying with having the B button used for running. If you play the new control scheme, it's not as bad, but you still have to adjust to X being used for the inventory screen. 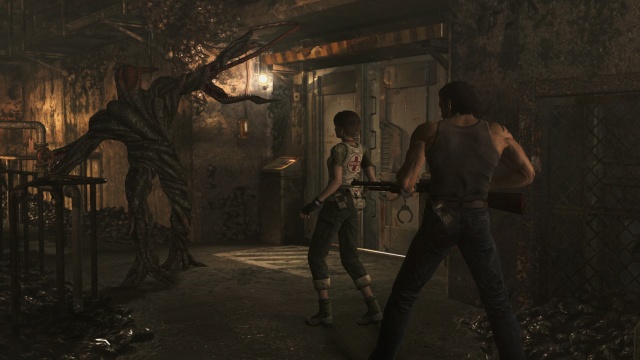 Back when RE Zero first released, when I thought of "a story that takes place before the mansion incident" I always envisioned a story that tells how STARS Bravo team got to the mansion. Basically, I always felt that RE Zero should be Bravo team's game, since the original game basically told the story of STARS Alpha team. When I first played RE Zero I had a mix of emotions with the overall way the story went. The game is basically the story of how Billy and Rebecca get through a side story incident. It gives us a bit of background on some members of Bravo team and the setup behind the mansion incident but Billy's past, Rebecca's survival and the new baddie's story take center stage. The story winds up being overall "alright" to me but I still can't shake what it could have been. The main savior of the entire story to me is how well Billy and Rebecca work as partners. I really feel as if they bond well and they sure do go through a lot together. But their overall journey in Zero brings up another point with the lackluster story - how can Rebecca survive through such a nightmare in RE Zero and act so timid in Chris' story in the original game (just like she is too scared to fight). That is constantly a question around the RE community though, so it's hardly a new bad aspect of the story to point out.

Despite all my rantings with RE Zero, I still love the game quite a bit for its gameplay, difficulty, atmosphere and partner system. It might be considered the black sheep of the original RE series but it is quite a unique and fun experience no matter what. Once you beat the game you unlock leech hunter mode which can get incredibly difficult. You have to go around the mansion and collect all the leech charms while maintaining your inventory space and overall healing and ammunition as you fight through enemies to find the charms. The leech charms take up space in your inventory and you can't drop them like you can with other items so it basically gets harder the more leech charms you find. Billy and Rebecca have extra outfits as well. Along with the original unlockables, the game also has newer outfits and a new mode (Wesker mode) that are unlocked after finishing the game. It's really nice to see all the extras that Capcom put into Zero's release since RE HD Remaster only had two outfits as extras basically. If you like RE HD Remaster then RE Zero HD is definitely worth a try for you. It puts a unique twist on the old RE formula with its partner system and being able to put down items instead of having item crates.

The Good:
+ RE Zero looks better than RE HD thanks to its even better backgrounds
+ New control style just like in RE HD, classic controls are still there too
+ RE Zero's partner system still stands out as the best one in an RE game
+ New extras including new outfits and a new Wesker mode

The Bad:
- The buttons for all control styles have been switched around way too much. Classic controls feel very awkward with the run button being the B button.
- All of Zero's flaws are still intact, such as the lackluster story and some enemy designs

Final Rating: 85% - Resident Evil Zero HD Remaster is easily the most unique of the old-school RE games and one that should be experienced if you're a fan of the series.