I sometimes hear the complaint that many old-school gamers don't really care for retro-style games since the games are basically just the same type of game that they grew up with. I'm one of those old-school gamers and I absolutely love to play a game that mimics the style of a retro game every now and then. I find it to be a refreshing break from the constant wave of hand-holding games that we have nowadays and it's good to play a game with simple gameplay once again.

If I was to describe Shovel Knight in one sentence, I'd say that it's a melee Mega Man with a mix of several other retro game features. Shovel Knight is a 2-D sidescroller with 8-bit graphics that is developed and published by Yacht Club games and the game has gained quite a bit of recognition from its past release on Nintendo consoles and PC. You start out as a blue knight armed with a shovel that is searching for his partner shield knight, who was taken over by a cursed amulet and sealed in the Tower of Fate. An Enchantress rises to power and spreads evil across the land and shovel knight hears that she has unsealed the Tower of Fate, so he goes off in search of his partner, shield knight. 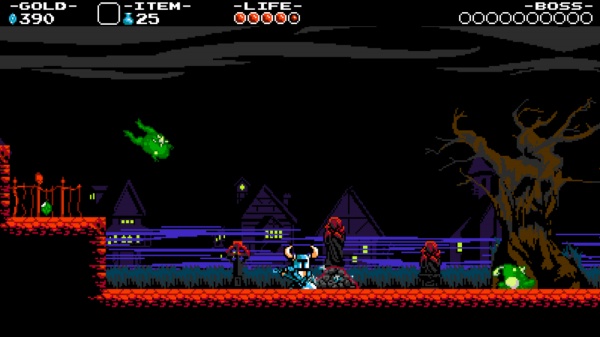 The world map of Shovel Knight looks much like the world map from Super Mario Bros 3. You move over the level icons and select them while in control of shovel knight. Areas are blocked off by locked doors that you have to unlock by defeating boss enemies. There are also random enemies and treasures that pop up on the world map that can lead you to a new stage. The gameplay of Shovel Knight is presented in a 2-D sidescrolling platformer style. You start out armed with only a shovel but gain access to several other items that give shovel knight special magic attacks, such as a wand that can shoot out fireballs.

The stages have breakable walls in them (much like in Castlevania) and shovel knight can pogo stick off enemies with his shovel (much like Scrooge in DuckTales). Shovel Knight is a total treasure fest. Defeated enemies will drop treasures and you'll find several treasure boxes and secret treasures hidden behind objects. The levels are often linear with a few splitting paths that lead to secret areas. The game has many bosses in it that are set up just like Mega Man bosses - they all have the last name knight (such as "Black Knight", "Treasure Knight", etc). Each boss has their own unique pattern and attacks that you'll need to study in order to defeat them and unlock new areas.

Shovel Knight can visit towns that are set up like the towns in Zelda 2: The Adventures of Link. You can talk to people in the towns for extra information and also buy items and upgrade your health and magic. There are musical pages that can be found in the environments and turned into a musician for extra music pieces and gold pieces. The music in Shovel Knight is very retro and it sounds fantastic, much like what you would expect from Mega Man stage themes. 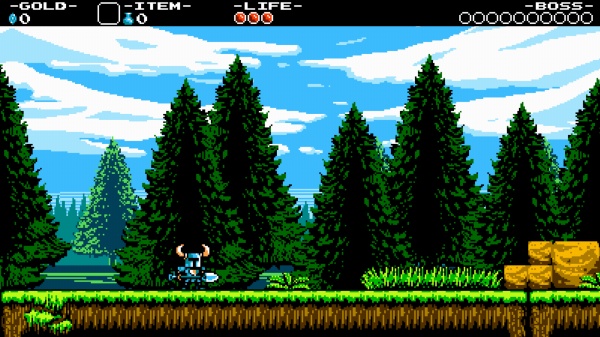 The game starts out easy, but it can get quite difficult in later areas. Shovel Knight has plenty of pitfalls in its levels and each hit to shovel knight will knock him back a few inches, much like a Belmont lead character in most Castlevanias, so you can expect many deaths throughout your journey. Thankfully, the game gives you infinite lives. You lose a certain amount of currency once you die, but you can go back to the spot where you died and reclaim them. Boss enemies and normal enemies increase a bunch in difficulty later as well. Normal enemies are mainly annoying with knocking your character into pitfalls. Spikes are one-hit deaths as well. The only problem that I found with the game is that it sometimes feels like the controls are delayed. For instance, sometimes it's like my character will not jump or move immediately after I press the button or direction, which causes me to get hit.

Shovel Knight has a new game plus mode once you beat it and there are tons of collectibles and secrets hidden throughout the game's stages. As usual, for the Xbox one version, the developers have added in achievements. If you're a fan of retro games and especially Mega Man-style sidescrolling platformers then I have a feeling that you'll love Shovel Knight. I usually don't stick with a retro game for very long, but I must admit that I returned to Shovel Knight more than I thought I would.

The Bad:
- The controls sometimes feel like they have delay

Final Rating: 85% - If you're a fan of retro gaming, then be sure to check out Shovel Knight since you'll find a lot of features from classic games mixed in with its gameplay.