World of Tanks has rolled onto the Xbox One after getting its start as a free-to-play tank-based shooter on the PC and debuting on consoles on the Xbox 360. If you've moved to the Xbox One from the Xbox 360, then you may be hesitant to begin your career as a tanker again from scratch, especially after you've spent so much time unlocking higher tier tanks in the game's tech tree. You can put those hesitations aside, though, because World of Tanks ties into your Xbox Live Account instead of to the console itself. All of the tanks, experience, and game currency that you earned on the Xbox 360 will be there waiting for you in the Xbox One version of the game. Everything will be the same as it was when you last exited the Xbox 360 game, although the Xbox One game will still insist on taking you through the tutorial before you can do much else. Not only is your account console agnostic, but the game itself is as well. Matches draw players from both consoles, and it will be completely transparent to you while playing as to whether or not your allies and enemies are on an Xbox 360 or an Xbox One. You don't need to worry about a smaller player population when migrating because the combined player base ensures that there are always enough players around to quickly get you into the next match.

While the gameplay remains unchanged, there are two main differences between the Xbox 360 and Xbox One versions of the game. The first is the graphics, as the game has been given a graphical facelift to take advantage of the faster hardware the Xbox One offers. Don't expect a revolutionary upgrade to the environments, though, the developers had to be careful to make the game look better but not so much better as to give a tactical advantage to Xbox One players via better resolution and greater draw distances or vice-versa though enhanced graphical flourishes such as fancy smoke effects clouding the battlefield. However, the tanks themselves did get an overhaul and now you can admire your tank collection in all of its new high resolution texture glory.

The next change is the addition of a mode called Proving Ground that gives you the opportunity to play the game outside of the multiplayer matches. In the Proving Ground mode, you can choose to play against AI controlled-tanks in one of the game's three online battle modes, Standard, Encounter, and Assault. Standard mode has both teams starting in a base at opposite sides of the map, Encounter places a single neutral base in the center of the map, and Assault puts one team in defense of a base while the other attempts to capture it. In the first two modes, a team wins after it either captures the opposing (or neutral) base, while in Assault there is a time limit to the match and the defenders win if they are still holding the base at the end. In all three modes a team can win by eliminating the other team - there are no spawns in World of Tanks, once you're knocked out of a match you are out for good. When playing Assault in Proving Grounds you'll have your choice of playing on the attacking team of the defending team. Proving Ground also throws in a couple of new game types not available in the multiplayer mode, a racing mode and a hunt mode that has you fighting your way past the enemy team to hunt down and destroy the most powerful tank in the game, the E-100. 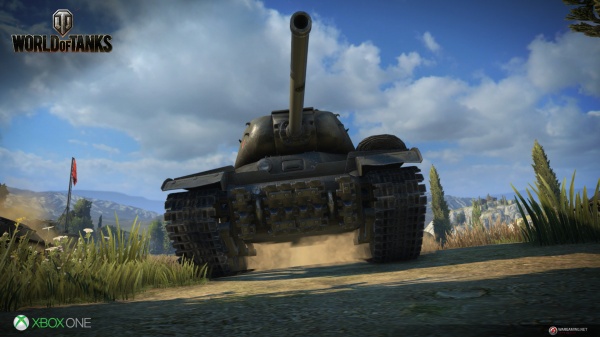 The enemy AI in Proving Ground is no replacement for live players, but it does play a competent enough game and will provide plenty of challenge to players new to the game. Also making Proving Ground a great way to break into World of Tanks is the fact that you'll earn currency as well as experience for your tanks' crews in this mode, albeit at a reduced rate compared to the multiplayer matches.

That's it for what's different about the game on the Xbox One, so let's move on to what's the same. World of Tanks is basically an online multiplayer shooter with World War II era tanks. The game straddles the line between arcade shooter and hardcore simulator, so while there is a marked difference between the tanks and you'll need to contend with things like limited ammunition, reload rates, tank speed and handling, and shot angles, things are streamlined to keep things fun and decidedly less difficult to manage than in the real thing. Plus there are the advantages of a third-person chase cam viewpoint and a zoom mode for the main gun that World War II tankers certainly didn't enjoy.

The tanks are available in several classes. Battle tanks, which come in light, medium, and heavy variants, are the head-to-head combatants for the game, the assault troopers of the battle, if you will. Light tanks serve as scouts, zipping around the battlefield acting as spotters of enemy tanks for the rest of the team. They are lightly armored and lightly armed, so hit and run tactics are necessary for survival.

Medium tanks are the backbone of the army, a balanced mix of speed and armor that give them the ability to range across the battlefield actively looking to engage the enemy.

Heavy tanks give multiple meanings to the word "tank" in the game. Slow but heavily armored and packing a powerful punch, they can take a lot of punishment and put the hurt on any tank unlucky enough to cross their path.

Tank destroyers are the snipers of the tank world. They have powerful guns with phenomenal range, but that comes at the expense of armor and maneuverability. They are best used by finding a hidden, elevated position to hunker down in and then lie in wait for an open shot on an unsuspecting tank. While the tank destroyer is a master of long-range combat, it is at a huge disadvantage in a close-quarters brawl, and a battle tank can make short work on them in this situation.

Lastly there is the self-propelled artillery. They're not technically tanks, and they don't play anything like the other classes in the game. They can rain down explosive shells across the map at enemies that they can't even see as long as a friendly tank can keep an eye on the target. This is potentially a huge advantage over the other tanks in the game, but this capability is tempered by a long reload time. Artillery takes patience, and the ability to resist taking shots until the right moment. It also means relying on your team for protection, because a close battle with a tank means certain doom. 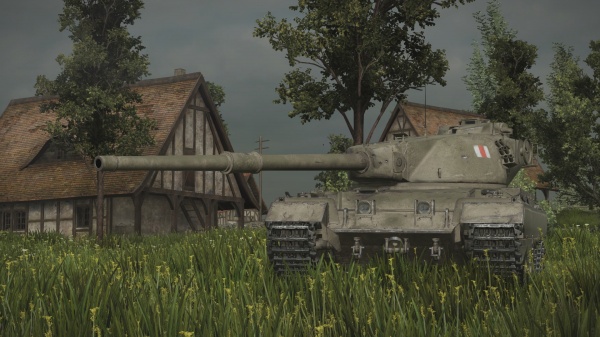 The tanks in each class are further divided into ten tiers; Tier I tanks are comprised of post-World War I peashooters while Tier X tanks represent the culmination of World War II tank technology. Tanks are also grouped by nationality, so each of the war's major combatants has a full line of tanks across the tiers. The game takes the tiers into account while matchmaking, so you don't have to worry about your Tier I being squashed by Tier X tanks each time you roll out.

Each player begins the game with a Tier I light tank from each nationality, and unlocking higher level tanks requires researching new "packages" for your tanks. These packages provide improvements to a tank such as improving its gun damage and range or its movement speed. After you've worked your way through all of the upgrades, you'll unlock the tanks on the next tier along that tech tree. Researching upgrades is really a two-step process, with the research itself being funded by experience that you earn in battle and the actual purchase of the upgrade being paid for with game currency called 'silver', both of which are earned by playing in battles. Experience is tied to the tank that you earned it with, so all of that time in an American tank won't help you unlock anything in the British tech tree. Silver can be applied to any tank, but it is also used to repair and resupply your tanks after battle so there's a bit of a tax on the silver that you earn. You can accumulate silver faster and tax-free by spending real money on the 'gold' currency which you can then convert to silver, although you can also consider this to be a tax paid on impatience. Gold can also be used to purchase special tanks at any tier, but these tanks exist outside of the tech tree and so can't be used to leapfrog your entire tank arsenal to higher tiers.

Silver can also be used to purchase special upgrades for your tank as well as consumable items to help keep your tank in a battle once it starts taking damage. There are also vanity purchases available such as fancy camouflage schemes which can be 'rented' for a period of time for silver or made permanent by spending gold. 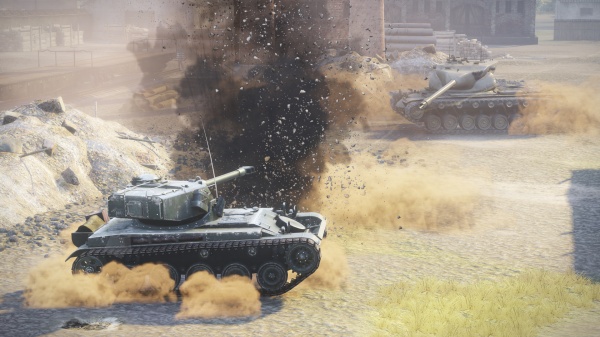 No matter which path you choose, making your way through the game's tiers takes time. If all that you are focused on is obtaining new tanks and tricking them out, then building your collection will probably feel a bit like grinding your way to better gear in an MMO. However, the game's matches are fun at any tier, so if you just focus on playing matches and having a good time, then your arsenal will continue to grow and evolve as a natural part of the gameplay, and you might not even notice how long it's taking you to reach the top tiers. As for those who are fine with taking the latter route and are worried about being at a disadvantage against the 'gold tankers' , I can assure you that it is quite possible to be successful playing the game's 'stock' tanks. Sound tactics and gameplay trump tank stats on the battlefield.

I enjoyed playing World of Tanks. It looks and feels different than other multiplayer shooters, and not just because it's played with tanks. Playing smart and taking things like sight lines, target profiles, and shot angles into account leads to far more success in the game than twitch-like reflexes. I also like the variety of play that you can get by taking tanks from all of the different classes into battles. There are some downsides to the game, though. If you are playing a stock tank and end up in a match with players who have both paid for premium tanks and know what they are doing, then you probably won't last very long. Also, it can take a very, very long time to reach Tier X relying entirely on free in-game currency; it's something that you're really going to have to work at. However, the game is certainly worth taking the time to download and try out, and even if you don't buy anything premium or spend hours unlocking everything the game will give you an enjoyable break from other shooters and will probably be something that you find yourself coming back to play now and again.

Final Rating: 84% - Make tracks to give World of Tanks a test drive on your Xbox One.