This time the game splits up its single player modes into a story mode and an adventure mode. Prior games had both of the modes mixed in with each other which lead to some downtime in between the main story. Having them separate is far better for those that just want to see the full story without interruptions. One downside to this is that playing the adventure mode early will spoil some of the events of the story mode, so you can't switch between the mode if you haven't finished story yet unless you don't care about spoilers.

The story mode is presented with some epic cutscenes and battle sequences that we are used to from the other games in the series. The actual story to Ninja Storm 4 was so very interesting and epic. The game starts off during the Fourth Great Ninja War that started in Ninja Storm 3 where the Allied Shinobi Forces are fighting against Tobi and Madara Uchiha and the game completes the full story from that point. I honestly, couldn't remember much of what happened in Ninja Storm 3 but the game gives you some nice flashbacks and overall story explanation to where you could really pick up this game and enjoy it even if you only know the extreme basics of Naruto. The story has no downtime and very little room for lighthearted jokes, it's all very serious and epic from start to finish. The game allows you to pick from English, Japanese and few other audio tracks. The English dub sounds great, but the lip movement doesn't match what is being said very often. The story is mixed with scenes where the characters move their mouth and scenes where still anime pics are on the screen during conversations, so the lip movement problem isn't all that bad. Ninja Storm 3 had the same problem with the English audio. 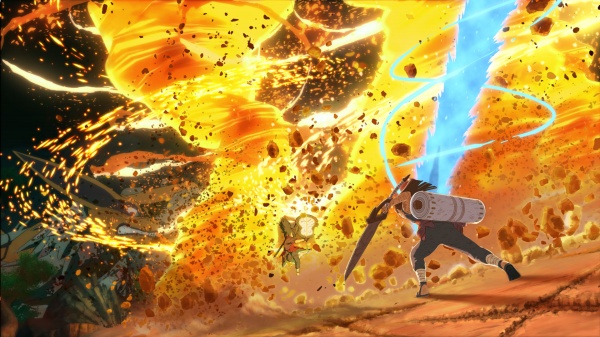 The gameplay of the story mode still has your single player versus along with shooter and beat'em up gameplay. Quick Time Events (QTEs) appear during cutscenes and they are all very welcome - much like QTEs in Asura's Wrath, these QTEs help to put the player into the action that is happening on the screen. Sometimes flashbacks will occur during fights. For instance, you'll be playing as Kakashi with the way he looks now then suddenly, it will change to you playing as a younger version of him - this really helps for the overall immersion of the fight at times. Each fight has extra objectives that you can perform to get items and there is an overall grading system for a fight where you will receive Ryo depending on how well you do. The Ryo can be used to buy items such as profile cards, titles and other unlockables in the Adventure mode. The Adventure mode also has the same extra objectives and grading system per battle.

Adventure mode is basically like the platforming section of the story mode from prior games. It's like an rpg mode where you are free to explore several locations and engage in fights with opponents. You'll have main quests and side quests to complete and there are several memory crystal collectibles and minor quest to find. Memory crystals allow you to engage in a fight from throughout the timeline of Naruto. Since the story takes place after the major conflicts of the story mode, a good bit of the Adventure mode is lighthearted fun, but there is a good bit of backstory to find through memory crystals and the overall side quests and main quests provide some interesting details for the Naruto story. The main quests can all be done rather quickly but there are still tons of collectibles and extra quests to engage in. I did experience some slowdown in some of the areas when too many NPCs were on the screen at once, such as in the Hidden Leaf Village, but the majority of areas run well.

Being on current generation consoles, the overall gameplay of Ultimate Ninja Storm 4 runs much smoother than previous games in the series. Each fighter still plays around the same as they used to. Some of the fighters have upgraded ninjitsu special attack animations and each fighter still has their own Awakening and Secret Technique. You can still pick partners and call on them during battles. This time you have actual tag teams and can switch between your partners by using the right thumbsticks. Besides tagging your partners in to fight, you can also switch between partners during the middle of combos to greatly extend combos (sort of like with Tekken Tag Tournament). All characters in a group share the same life bar. You can also break armor and weapons on your opponents. Thanks to the new elemental damage, you can hit your opponent with a fire attack that will slowly burn away at your opponent's clothing. The opponent can run around the arena or get hit by a water attack to extinguish the flame. There is also a wall run feature that returns from Ninja Storm 2. Characters can run up certain walls and attack from the wall with projectiles and ninjisu attacks against the opponent that is either on the ground or on the same wall. You can knock the player on the wall back down to the ground by hitting that player with some sort of projectile. 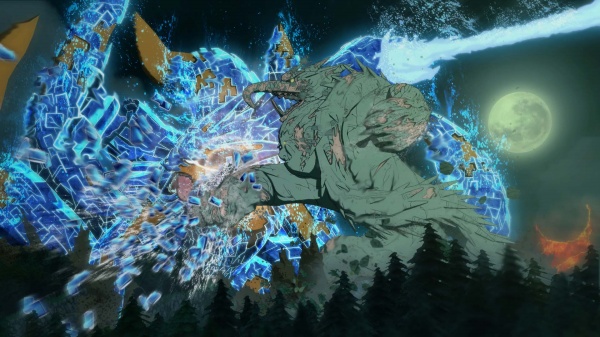 The game has such a large cast with so many unlockable characters and possible slots for DLC characters that I can't even tell you how many characters are in Ninja Storm 4. It has way over 100 characters. Many of the characters return from previous Ninja Storm games. A good bit of the unlockable characters come from playing story mode. Some characters have different variations with different ninjitsu attacks. Along with the single player modes, the game has a free battle mode that allows you to practice and there is also a survival and tournament mode and a mode where you can switch up your final attack animations. As usual, the game has an online mode as well. You can decorate your player card with borders, titles and pics that can be unlocked from shops in the Adventure mode.

Altogether, Naruto Shippuden; Ultimate Ninja Storm 4 is a fun game for new players and experienced Naruto vets alike. If you're in it for the single player then the game has a story mode that lasted me well over 8 hours and then there is an adventure mode with tons of quests to perform and collectables to find. If you're more of an online fan then the game has a bunch of characters to choose from and the overall fighting experience is so much smoother than it was in previous games. If you're a diehard Naruto fan then you owe it to yourself to check out this release and if you enjoyed Naruto games in the slightest, based on previous releases, then this may be the game that will convert you to a Naruto fan like it did for me.

Final Rating: 90% - The swan song of Naruto: Ultimate Ninja Storm 4 couldn't be louder with this fantastic release that improves upon so much from previous titles.