Out of all the Devil May Cry (DMC) games that I have played, DMC4 is probably my most played game in the series. DMC4 marked the debut of DMC on the Xbox 360 and PS3 and it looked fantastic when it first released. I love the game's combat system so much that I wrote a full guide for the game and played it for about a good three months after it's release to completely find every little secret, strategy and combat exploit that I could. Well, it's been about a good seven years since then and I had forgotten the majority of techniques and secrets that I used to know so I felt like a total noobie while starting DMC4 Special Edition and basically got to learn it all over again. Devil May Cry 4: Special Edition (DMC4: SE) is an upgraded version of the original DMC4 that features some of the PC extras and three new characters to play as.

I won't bore you with a full synopsis of the game since most of you already probably know what DMC4 is like anyway, so I'll get right to the new stuff. First of all, the entire game now runs at 60fps and has 1080p visuals. The original game already ran close to 60fps all the time anyway, so the framerate looks about the same really, but the entire game looks much sharper than it used to on consoles now. PC fans are probably familiar with the Legendary Dark Knight mode that was added for the PC version and that is now included on the SE version marking its debut on consoles. The game also has a turbo mode and choices of either English or Japanese dialogue. Probably the most noted extra for the SE version is the inclusion of three new playable characters - Vergil, Trish and Lady.

At first glance, Vergil seems like a direct copy of his DMC3:SE appearance since he still looks about the same and carries over the same weapons from that game. Vergil still has his Yamato sword, Force Edge sword and Beowulf gauntlets as his Devil Arms along with his Summoned Swords for his projectile weapon. Vergil still plays the same as he did in DMC3:SE but he has several new moves for his weapons. All of his weapons have new attacks that can be done, but his Yamato can be used almost exclusively now as his main weapon. If you remember from DMC3:SE, his Yamato didn't have as many attacks by itself, but in DMC4:SE he now has more aerial attacks and ground attacks with Yamato. His Summoned Swords has a new attack where they rain down on an enemy as well. Some of his newer attacks look similar to the attacks he had in Ultimate Marvel vs Capcom 3 (UMvC3). He has a new gauge called the "concentration gauge" that rises as he attacks or taunts and lowers as he walks. This new gauge allows for him to do more powerful attacks as he raises it such as a much more powerful judgment cut. The gauge is quite fitting for Vergil since it makes a player want to use his teleport more often and stay off the ground. Vergil is fun to play, but he still wasn't as fun as the other two characters to me since his devil arms and overall playstyle were too similar to DMC3:SE. 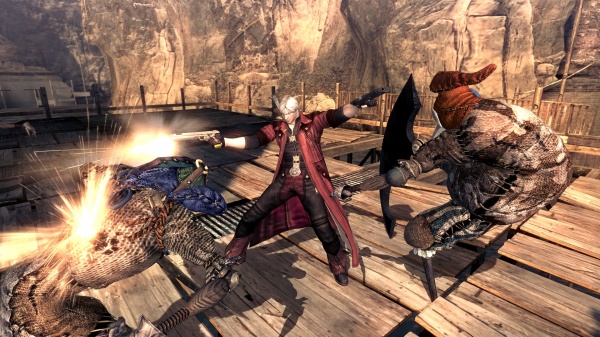 Trish's playstyle feels similar to Dante but she still feels unique in the way she is meant to attack. Many of her moves are similar to the moves that she has in UMvC3. Trish also made an appearance in DMC2, but I never did care enough about that game to unlock her back then so I don't know what she was like in that game. In DMC4:SE she comes equipped with the Sparda sword and she can fight barehanded. For projectile weapons, she can shoot dual pistols and she uses Dante's Pandora weapon. Trish is quite flashy with her Sparda sword and she can toss it at an enemy then run up and perform exclusive barehanded attacks that can only be done while her Sparda sword is hitting her opponents. She has many options while her Sparda sword is chipping away at her enemies. Her Devil Trigger sends an electrical aura around her body and her barehanded attacks all generate electricity as well. Her barehanded moves borrow many moves from Dante's gauntlet attacks, but she does have unique properties with them, such as leaving an electric trail after performing a downward kick from the air and the electricity will stun her enemies in place if they get caught in the trail. Trish is a lot of fun to play and feels quite unique compared to Vergil, but still not as unique as Lady.

DMC4:SE marks the first time that Lady has been playable in a DMC game and she feels really fresh overall. She is basically a projectile character. Her only few melee moves are done with the bayonet on her Kalina Ann rocket launcher but she has a whole plethora of projectile moves. Besides using the Kalina Ann as her melee weapon it also serves as her projectile weapon along with dual pistols and Dante's Coyote-A shotgun. All of her moves and overall playstyle feel completely different compared to the other characters making her a blast to play (pun intended). She can toss out grenades, send enemies into the air with her Kalina Ann grapple, charge shots with her pistols and unleash a huge explosion on her enemies, along with several other options. She brings along a few moves that Dante has such as a thrust and shotgun blast and a nunchuk shotgun blast, but every move that she comes equipped with has more power to it. Lady can also toss out several grenades around her with the tap of a button - it seems to charge up like a devil trigger. Lady was a bit hard to play while starting out with her since I'm not used to a character that relies so much on projectiles in a DMC game, but she comes off feeling very fresh and she is easily the most unique addition to the game.

One cool part about all the new characters is that they all have their own unique taunts per stylish rank - Vergil can actually attack with his taunts. All characters can be used in the campaign or in Bloody Palace. Vergil gets his own full campaign while Lady and Trish share a campaign much like Nero and Dante. The campaign is the exact same campaign that Nero and Dante have sadly and I'll get more to that in a moment. As already mentioned the game has a Legendary Dark Knight mode that was in the PC version. This mode takes you through the main game campaign and GREATLY increases the enemy count per encounter. In this mode, you'll be fighting harder enemies earlier and you'll sometimes have so many enemies on the screen that you won't be able to see your character making it easy to get a high style rank. Thankfully, the console version holds up very well to the vast amount of enemies on the screen - I had only a few rare moments of slowdown and that was during the normal campaign when in tight areas. Legendary Dark Knight mode is a very welcome addition to the DMC4 campaign that really livens up the main game a good bit for replay value. 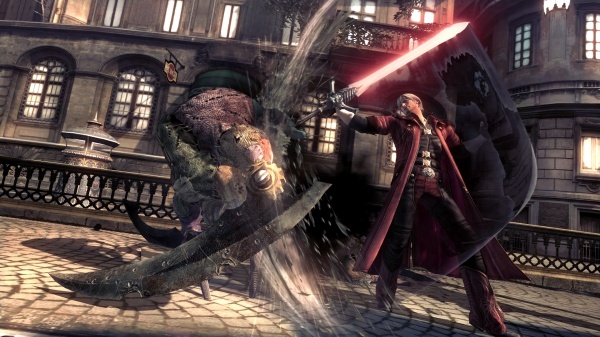 All the difficulties from the original game are still included (Human, Devil Hunter, Son of Sparda, etc) and they must all be unlocked. Bloody Palace must be unlocked as well. If you're familiar with the original DMC4, you'll probably remember the game for it's campaign. The first half of the game is a blast while playing as Nero. There is little backtracking and most areas feel unique. About halfway through the game, we switch to Dante as the playable character and are forced to backtrack through every single stage that Nero just got through with and fight all of his bosses once again which feels like a desperate attempt to make the game longer by recycling everything over again. The last Dante stage and the last few stages of the game give us new content, but the ones prior to that feel tedious. Vergil's campaign really shows off the recycle strategy all too well since you'll be fighting some bosses a total of three times with him. Vergil and Trish and Lady's campaign have an extra cutscene at the start and end of their campaign. They really don't have much of a story, but it is a lot of fun to play as them.

Just like with the original DMC4, the overall combat once again saves the day and provides a really fun and deep action experience even with the game's low-down attempt at stretching out its campaign. The option to select different characters helps out a lot with the replay value since Trish and Lady are very fun to play and take a lot of learning to master. Legendary Dark Knight mode basically turns the campaign into a Bloody Palace with its insane amount of enemies and also players have the option to take the new characters into the actual Bloody Palace mode. Every character in the game has two outfits now. Vergil's new outfit changes his Devil Trigger form to Nelo Angelo from the first Devil May Cry but doesn't seem to change his move list unlike that form in DMC3:SE. Overall, DMC4:SE is a fun extended version of DMC4 that I enjoyed greatly, but the flaws of the original game still remain and they are painfully obvious just like they were when the original game was released.

The Good:
+ 3 new characters to play in all modes
+ Legendary Dark Knight mode
+ Trish and Lady feel very fresh while playing as them
+ Still has a very catchy soundtrack

The Bad:
- All the flaws from the original are still there (recycled stages)
- A few moments of slowdown here and there (usually rare)

Final Rating: 80% - Just like DMC3, DMC4 now has its own special edition version, only this time we get more extra characters to play.