Dungeon of the Endless Review

Dungeon of the Endless is unlike any game I've ever played. It combines elements of dungeon crawlers with arcade-y tower defense tactics. It's quick, fun, quirky, and a significantly different experience than I've found anywhere else.

You start each game by choosing two characters with varying strengths and weaknesses. Each one can be either beneficial or detrimental based on how you choose to approach the game. Along with these two crewmembers, you're given a mysterious crystal. The point of the game is to get your crystal to the exit of each individual level, which can only be found through exploring the "dungeon" (ship) and opening doors. Each door you open will give you extra food, science, industry, and dust. Along with these things, new doors often contain and unleash monsters that will try to kill you and your important crystal. Industry, science, and food are used for building tower defense elements, researching new ones, and healing your characters respectively. Dust is used to power new rooms in which to place these elements. New waves of monsters also cannot spawn in powered rooms. Once you clear out all of the rooms and monsters, you gear up each room with defenses. Once fully explored, grabbing the crystal and making a run for the exit is when things get very interesting. Once it's in your (presumably) fastest character's possession, monsters and enemies begin coming from almost every room that you have not powered using dust. This allows for lots of strategic planning and forethought in order to get everyone out alive.

After a few hours, though, I realized that the game has different ways that it wants to be played. DotE is very distinctly unique in the way that the game wants you to play it. In early play-throughs, I got the distinct feeling the game was meant to be played quickly, because of the ease in which your chose characters can die if you aren't careful. As you play through the game, you encounter new characters that can be added to your party towards the maximum of four. 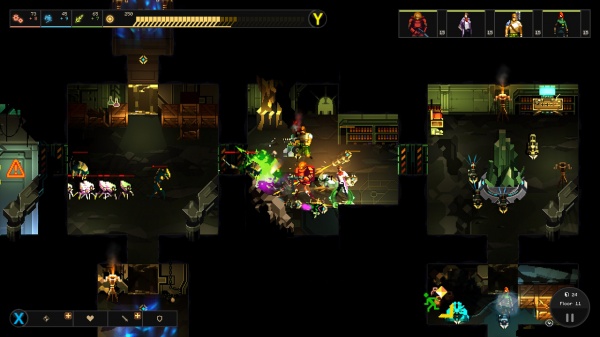 The arcade part of the game that I mentioned is based on the scores that you get during the game. You get a score after every death based on how far your characters made it and on what difficulty you played on. Therefore, for a longer play-through, you could put the game on very easy and get through twelve levels, or a higher difficulty level and get through just a few levels with the same score.

The gameplay specifics are pretty complex, so I won't get too far into them here. The game does a fairly good job of balancing the characters with the tower defense elements, which include guns, character bonuses, and research modules. As you progress through the game, the tower defense elements only become more and more complex and important. In each level you have to plan exactly where to place characters and where to place tower defenses. In addition, some of the players gain bonuses from being in rooms with certain guns or additions, so that is always something to consider as well.

I will say that the game definitely does not do a thorough job of explaining how the game really plays. The tutorial gives a broad overview, but you can really only learn the specifics of how to play by watching YouTube videos and reading online wikis. That was a lesson that I learned the hard way, in which I played hours of the game and still missed basic gameplay staples.

I've gone back and forth with this game and my overall feelings on it. On one hand, I admire its ambition is basically creating a genre that I had no idea could exist, but at the same time I was very put off by its difficulty settings, which were either too easy or too difficult. Even though the game can be played fairly quickly, I'd say to truly master this game that you would really need to play a good deal and do your research. The gameplay curve is quite steep for some people, myself included. All of that being said, I can't say that I didn't enjoy my time spent with it, and it kept bringing me back in to try new strategies or pairings in different dungeons.

Final Rating: 83% - An interesting stab in a new direction that has its definite flaws, but is still worth the time - if you're willing to give it.