Rise of the Tomb Raider Review

There's a lot of video game DNA in Rise of the Tomb Raider. If you play a variety of games, then it's not hard to notice that Rise of the Tomb Raider shares similarities to games in the Assassin's Creed, Uncharted, and Batman Arkham series, to name a few. Often this is the mark of a derivative game, an ill-conceived attempt to cash in on the success of another successful franchise, but that's not at all the case here. Rise of the Tomb Raider takes these elements, and many of its own unique touches, and combines everything into a compelling and enjoyable experience that feels wholly its own.

Rise of the Tomb Raider is the second outing for the new Lara Croft, and she is rapidly becoming one of my favorite video game protagonists. Her resourcefulness, intelligence, and grace under pressure are admirable, as is her refusal to be bullied or intimidated, but she is also very human. She has her moments of doubt and fear, and her motivations for pursuing the artifact at the heart of the story are conflicted and deeply personal. I developed such an attachment to her character during the game that I felt bad each time I died - it wasn't just a video game mistake followed by a checkpoint reset; it was almost as if I'd lost Lara to the world and as a result there was a little less hope left for it.

As for the story, Rise of the Tomb Raider sends Lara to Siberia in pursuit of a fabled artifact rumored to bestow eternal life. Her quest is deeply personal, as her father dedicated the latter part of his life to finding the artifact. His inability to find it, and to convince anyone else that it even exists, sent his career into a downward spiral that eventually ended with him taking his own life. Lara is seeking the artifact to prove her father right and redeem his reputation, but there is more to it than that. She is still struggling to come to terms with his death, and while she might not readily admit it, finding the artifact is a desperate attempt to end her grief and make it so she never has to feel that way again. But Lara isn't the only one after the artifact, a mysterious organization called Trinity is getting close to it as well, and their intentions for it are far darker than Lara's. Now stories about ancient artifacts of power pursued by both an archaeologist and a secret society obsessed with the occult are certainly nothing new, but Rise of the Tomb Raider manages to tell a good story without getting lost in a sea of clich�s; this is more of a story about Lara than it is about an artifact. The story is delivered through a judicious use of cutscenes, encounters, and Lara's internal monologue that keeps you more in the action than out of it, although this means that those who want a deeper dive into the story will have to find and listen to the numerous audio logs scattered throughout the game. 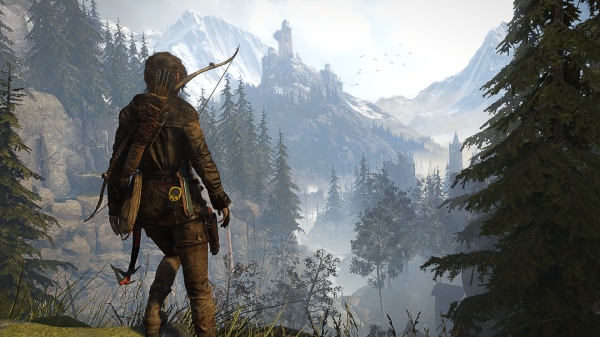 The gameplay itself has three primary elements to it. The first is Lara versus nature, and involves locating and gathering resources to craft weapons and other items, hunting and defending herself against the local fauna, and using her athleticism to traverse the environment. The next is Lara versus man, a conflict that you can approach stealthily or overtly. And lastly there's the combination of traversal and puzzle-solving that comes into play when our favorite Tomb Raider is raiding a tomb.

You'll spend a good deal of the game in bounded zones that act as open-world style hub areas. The map will highlight your next story-based objective, but you're free to explore the area looking for side missions, secret areas, and other places of interest until you want to take on that objective. Campfires in these zones give you a place to craft new items and spend your upgrade points on new skills, and also serve as fast travel points that allow you to jump to any other campfire you've discovered so far. Some areas will be blocked off to you at first, requiring you to gain a weapon or tool before you can proceed, and while this isn't that unusual for a video game it felt a little odd here. A woman who can craft grenades should be able to figure out how to use her ice axe to get past a wooden barrier on a cave entrance. This aside, the areas are fun to explore and traverse, and the bounded size of these areas along with the fast travel system helps you to spend more time looking for secrets and less time just trying to get from Point A to Point B.

You're not the only creature roaming these environments, and while there are plenty of benign animals like rabbits and deer, you will have to deal with things with teeth like wolves and bears. I found these encounters to best be avoided, or at least approached with a good deal of caution, as an angry bear or a pack of wolves can quickly overwhelm you, especially during those times when you find yourself armed with nothing more than a bow that you've made yourself.

When you encounter vicious beasts of the human sort, you can try to remain unseen and pick them off one by one or you can simply start shooting. The stealth approach is a little easier, if more time-consuming, and it is the approach encouraged by the game through experience point bonuses for stealth kills. You'll need to crouch behind cover or stick to the bushes, waiting for the moment when you can get a little closer, until you sneak right up behind an enemy and deliver a death blow out of view of his compatriots. If you need to separate a pair of enemies, a little distraction in the form of a tossed bottle will send one of them off to investigate. I enjoyed taking the stealth approach - the mechanics work well, the size of the encounters is manageable and not overly long, and it seemed more natural for Lara to take this tact. 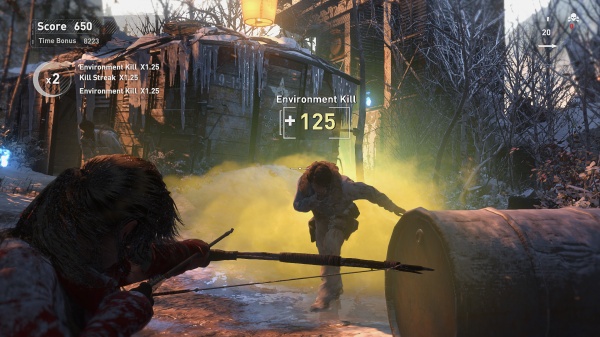 If you make a mistake and are detected (or you decide to just go in guns-blazing), you'll find yourself in a firefight. While the gun battles in the game won't make you feel like you're in a full-blown shooter, they are exciting in their own right and Lara can hold her own in a shootout. Being able to craft bandages and grenades under fire certainly helps, as does the ability to use the environment to help even up the odds a little. Overall, I didn't find the enemies too difficult to handle once the shooting started, though. I found melee encounters a little harder to manage than the out and out gun battles, but then again it seems appropriate that Lara would be at a disadvantage in a contest of strength on strength. Even so, you can make her smarts and resourcefulness work for her in these situations by investing in skills that give her the chance to deliver critical strikes after dodging an attack.

Tombs are big part of the experience in the game, and you'll need to make your way through several of them both in the course of completing the game's story and in discovering hidden "challenge tombs" that are technically optional but really aren't if you want to enjoy the game to its fullest. Successfully completing a tomb requires a combination of traversing their environments and solving the puzzles and traps devised by ancient engineers. You'll be aided in both of these endeavors by Lara's survival instincts, which are activated for a short time by clicking the right stick. This will highlight all items of interest - climbable walls, collectible items, switches, etc. - in an orange glow. While this won't actually solve any puzzles for you, it is such a big aid that many gamers will probably want to forgo using it to keep the challenge level higher. A lot of imagination went into the creation of the game's tombs and puzzles, and while I wouldn't call any of the puzzles diabolical or fiendish, they were certainly clever at times and pretty much all fun to solve. Traversal is fun also - the game implements the traversal controls very well so that Lara climbs, grapples, and shimmies her way through the tombs smoothly and naturally. If you played any of the early Tomb Raider games, then the game's tombs will certainly evoke some fond memories.

These tombs, and everything else in the game, are visually stunning. Tomb Raider is obviously taking full advantage of the Xbox One's processing power. There were times at which I found myself pausing to take in some of the sights, and even little things, like the tracks Lara leaves behind while trudging through the snow, are so well rendered that you can't help but to notice them. 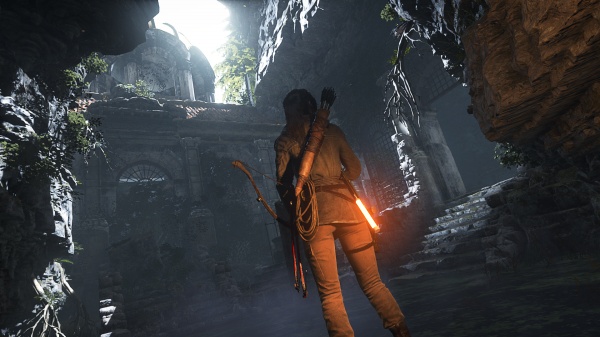 When you've completed the game's story, there's more to do in the form of the game's Expedition mode. From this mode you can replay chapters that you've completed in the game, re-enter zones with new objectives, or make timed-scoring runs through levels or tombs. You can play these straight-up for personal challenge, try to beat your friends' scores, or improve your rank on the leaderboards, or you can mix things up, change the rules, and alter the level of challenge by playing special cards that you obtain by purchasing card packs with coins earned during play (or real money for you impatient types). It's not for everyone, but if you like putting your skills to the test you'll have some fun with it.

Overall, Rise of the Tomb Raider is easy to recommend. The gameplay is compelling and the tombs are a joy to explore, but Lara herself is the star of the show. She's a fascinating and intriguing character, and I can't wait to see where she goes next.

Final Rating: 94% - Tomb Raider is indeed a franchise on the rise.