It's been more than ten years since the first Halo game was released, and that was two console generations ago. There are probably plenty of Xbox One gamers who've never even played a Halo game before, let alone the first two that appeared on the original Xbox system. If you're one of those gamers, or it's been a while since you've played a Halo game, The Master Chief Collection gives you the chance to get caught up on the story so far before taking on the next installment in the Halo saga, Halo 5.

The Master Chief Collection doesn't contain every Halo game ever made, but it does include Halos one through four, the games that tell the saga's primary tale and feature the face of the franchise, the Master Chief himself. The first game in the collection is a re-release of the already re-released Halo that was given a new subtitle in the process, Halo: Combat Evolved Anniversary. The same treatment has been given to Halo 2, which now carries the new moniker, Halo 2: Anniversary Edition. Every game has been given the re-master (or re-re-master) treatment for the Master Chief Collection, upgraded to 1080p resolution and 60 FPS. Re-mastered does not mean remade, though, so don't expect next-gen like graphics out of last-last-gen games. The visuals do give you an appreciation for how far things progressed in the roughly ten year span over which the games were originally released. In fact, you can press the View button at any time while playing the first two games and instantly switch to the games' original graphics - something I found myself doing almost obsessively each time I entered a new environment in the first two games. 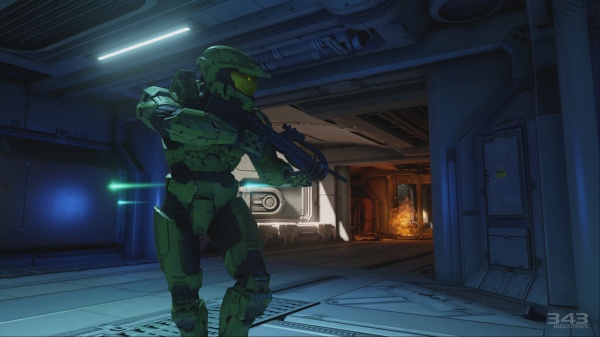 The games are all tied together through a single menu system that lets you jump between them whenever you like. Everything is unlocked from the beginning, even every mission in every game. If you want to start playing with Halo 3's third mission, then there's nothing stopping you from doing just that. Or you can skip a mission that you're not enjoying or that's giving you trouble and get on with the story. The missions are also designed to be played separately from the campaigns from a challenge perspective, giving you the opportunity to earn bragging rights by beating the par completion times or setting new high scores. You can also enable "skulls" before taking on a mission, each of which modifies the mission in some way to increase its difficulty and in turn enable a bonus score modifier. Reduced ammo, restrictions on your shield recharge, and grenade happy enemies are just a few examples of the surprisingly diverse set of modifiers available. In addition to the individual missions there are also campaign playlists which feature collected missions from all four games brought into a single integrated experience.

Not surprisingly, Halo: Combat Evolved feels the most dated of the games. The story holds up as does the game's setting on the mysterious ring world that gave the first game, and the entire series, its name. The game's default control scheme seems downright alien compared to today's de facto standard for shooters and it's quite strange playing a shooter that doesn't let you look down the sights of your assault rifle. If you're not up from experiencing the game with the original controls, you can easily reconfigure things so that they match what you're used to using, and these settings can be applied to single games or applied across all four.

The enemy AI in Halo, revolutionary at the time the game was first released, still holds up fairly well. Enemies do a lot of popping in and out of cover and will try to flank you, but if you play shooters often you shouldn't have too much trouble getting through the campaign. It helps that you just need to place the large reticule over an enemy and fire when it's red and you'll hit them. The enemy sophistication increases as you move through the series, not just in the diversity of new enemy types but in their attack tactics as well. 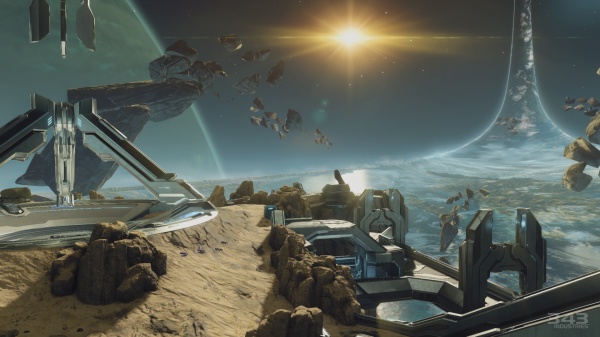 For Halo 2, the Master Chief Collection provides completely reworked cutscenes and cinematics, and these are now next-gen quality. They look fantastic, and it's great to experience the story elements of Halo 2 in animated sequences powered by the Xbox One's next-gen graphics. The cutscenes also support the View button allowing you to switch back and forth between the original and new animation at will, and the original look downright primitive in comparison. I like that switching is accompanied by a slight "rewind" of the video, so you don't miss out on comparing a point in the video because of the time it takes you to hit the View button.

Halo 3 and Halo 4 were originally released on the Xbox 360, so there's a definite improvement in the graphics quality when you move to those games even taking into account the graphics improvements given to Halo and Halo 2. You can even see an improvement between 3 and 4, especially in the cinematics, as developers became more skilled with Xbox 360 programming in the five years that separated those games' original release dates. 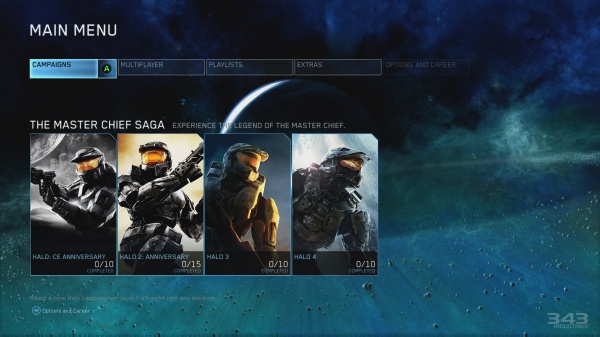 I've played all of the Halo games before, but in the intervening years since I must admit that I forgot some of the details in the games' storylines. It was fun revisiting them, both because the stories are enjoyable and because fond memories of playing through the games the first time were jarred loose from the dark recesses of my mind. I also really appreciate that so much care was taken in seamlessly tying the four games together - there's an obvious reverence for the original games that is often lacking in re-releases. Sure, all of these games have been released before, but it would be very difficult to catch-up on the Halo saga without the Master Chief Collection. And, besides, wouldn't you like to earn Achievements while playing through Halo? There are almost 450 of them up for grabs across the entire collection!

One thing that I found lacking in the collection is the absence of bonus content along the lines of the "making of" style featurettes you'll find on movie discs. A franchise with as much history as Halo and a collection that brought it all together for the first time begs for some behind the scenes and historical content.

Multiplayer gameplay has always been a huge part of the Halo series and the Master Chief Collection would feel incomplete without it. The approach taken with the multiplayer game is different than that taken with the campaigns in that everything has been integrated into a single multiplayer mode rather than four separate ones aligned with each game. You do get everything, though, every mode and every map from the series - you even get multiplayer maps that were only available with the PC released of Halo 2. The modes are organized into playlists, with playlists featuring maps and game types drawn from multiple games. All games except for the original Halo are featured exclusively on at least one list, with Halo 2 getting the lion's share of dedicated lists. Some lists will rotate through a small handful of maps, while the Team Slayer and Big Team Battle playlists each feature over forty maps. As you move from one match to another in a playlist, the players will be given the chance to vote for their preferred next game from a random selection of three options presented by the game.  The multiplayer mode will feature a ranking system, with the keyword there being "will". At the time of this writing, the ranking system still appears under the "Coming Soon" features. Multiplayer games maintain the same degree of fun as they did in their original release, although that doesn't really apply to the pre-Xbox Live original Halo which only supported LAN or split-screen play back in its day.  Bunny-hopping seems to be as much a part of the game as in the past and some weapons seemed over-powered compared to others, but overall multiplayer is a fun experience.  In addition to the playlists, you can create and host custom matches or use the game's Forge feature to craft new game variants and even edit the maps - at least as far as placements of spawn points and objects go, you won't be able to change the map layouts themselves. 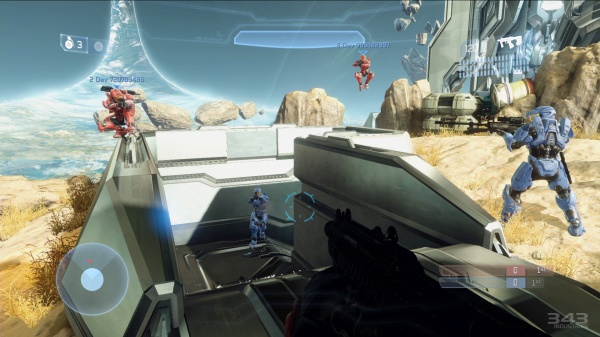 The Master Chief Collection gives you a tremendous amount of game content for the price of a single game. It's also the only way you'll be able to play Halo 2 multiplayer online anymore, as that game's servers have been shuttered for several years now. If you've played all of these games before and are not that interested in running through the stories again, you'll need to ask determine if the multiplayer game alone is worth the price of admission to you, considering that a lot of people will be jumping to Halo 5 once it is released. Otherwise, the Master Chief Collection is a great way to experience the Halo saga from the beginning, and it's good to see that so much care was taken to make it all a wonderfully integrated experience.