Assassin's Creed Unity has some big shoes, or rather boots, to fill, coming on the heels of the memorable Assassin's Creed Black Flag. It's hard to compete with a tall ship, an open sea, and seemingly countless islands filled with ancient ruins and buried treasure, but as a response Unity offers up the City of Light in one of its darkest moments, Paris during the French Revolution. And it offers up all of it, at least the all of it that existed in the late 18th Century. It is indeed the best of times and the worst of times, something you'll come to appreciate after playing the game.

The Assassin that you'll be channeling this time is Arno Dorian. Arno grows up living a privileged life in the village of Versailles, unknowingly bound by blood to the Order of the Assassins. As a young man he crashes a party and soon finds himself taking the fall for a murder he didn't commit, and one you undoubtedly can guess is tied to the centuries old struggle between the Assassins and Templars. Arno has the good misfortune of being sent to the Bastille in Paris at just the right moment in history, but before an angry mob in search of ammunition on a summer's day facilitates his escape, he is placed in a cell with an Assassin who coincidentally knew Arno's father. On the loose in a city in the grasp of revolutionary bloodlust, Arno is taken in by his jailhouse friend and initiated into the Brotherhood. From there, well, things get a bit muddled story-wise. Ostensibly you're after the true murderer, but getting to that person involves navigating the serpentine web of Assassin/Templar conspiracies and assassinating a cohort of strangers first, apparently because looking for a person with the means, motive, and opportunity to commit the crime is a concept that postdates the French Revolution. Arno himself doesn't seem to be in too much of a hurry to find the killer anyway, given his fondness for other distractions and mysteries. 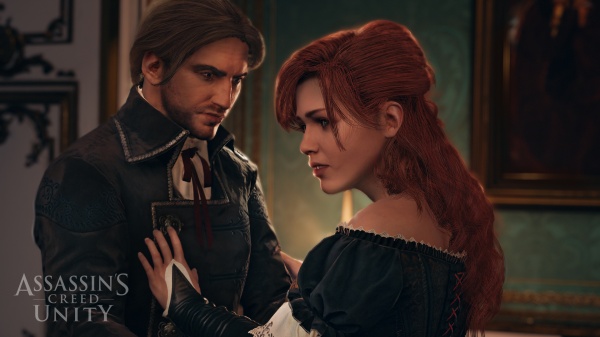 As noted earlier, Unity's answer to the pirate infested waters of the Caribbean is a huge city teeming with crowds and there's plenty that's impressive about the game's virtual version of Paris. The major landmarks of the city are all recreated in impressive detail, both inside and out. I couldn't help feeling more like a slack jawed tourist than a deadly assassin the first time I entered Notre Dame and saw the light streaming through its massive stained glass windows. And the game doesn't just create the major sites; the city is filled with the cemeteries, marketplaces, chapels, and theaters that existed in Paris in the late 1700s and even the city's infamous catacombs wind beneath its streets. As you explore further out into the city, you'll even see that different neighborhoods have their own individual character. You may notice some repetition in the buildings that fill out the rest of the city, but it's something that's not overtly noticeable unless you pay attention for it. Many buildings have interior spaces as well, making the city feel more real and less of an illusion created by a fa�ade.

In addition to the buildings, Unity's Paris is filled with people. Lots and lots of people. They're gathered in the pubs, moving about their homes, walking down the streets, and rioting in the public squares, and the make the city feel crowded, restless, and angry.

This recreation of a living, breathing Paris is made possible by the fact that Unity was developed specifically for next-gen consoles, and it tries to make full use of their power. I use the word "tries" because there are numerous times when it looks like the game needed a bit more work before release or that perhaps the developers' reach exceeded even the power the Xbox One could give them. If you've played an Assassin's Creed game before, then you know that you can remove the "fog" from a section of the map by climbing the tallest structure in the area and pressing the "synchronize" button. Before the map's secrets are opened to you, you're treated to a rotating, 360 degree, wide angle pan of the surrounding area. In Unity, though, the console has trouble keeping up, turning the sweeping view into a bit of a herky-jerky affair. And it's not just there that you'll notice issues with the graphics. Crowds can cause the framerate to drop noticeably, sometimes textures can be seen popping in a little late, and Arno's victims sometimes partially fall through walls when slain. I've even fallen through the bottom of the game world on more than one occasion, leaving Arno dangling helplessly in a white abyss. Luckily the game's fast travel system still functioned and I was able to escape oblivion by appearing on the top of a cathedral's steeple. 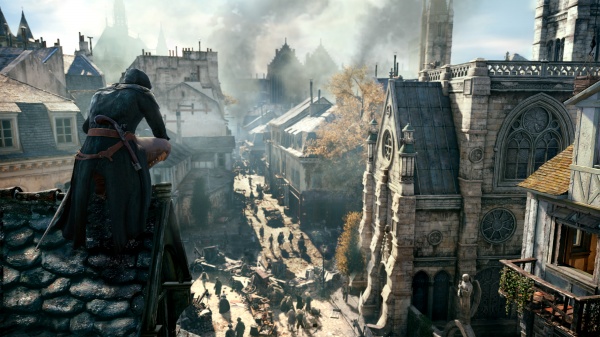 Your ability to traverse cities as if they were your personal parkour playground has always been a hallmark of the Assassin's Creed series, so it's a little disappointing that the first game developed exclusively for next-gen manages to carry over some of the series' long-standing environment traversal issues. The most annoying of these is Arno's tendency to get hung-up on some piece of architecture or furniture, which is both frustrating and completely ruins the illusion that you're a nimble assassin. Arno has a particular fascination with perching, and often your dash across the rooftops of the city will be brought to a quick stop as you pause to crouch atop a clay pipe sticking up out of a chimney. The game also makes popping out of cover mode more difficult than it should be, and trying to enter a building through a window can quickly turn into a comedy routine. One thing that the game does differently than its predecessors, and that it got completely right, is the ability to free run "down". Coming down the side of a tower to street level is a much safer affair now than it has been in previous games, which have always had a predilection for making assassins jump off of the sides of things to their dooms.

As is expected in an open-world game such as this, you can initiate a story mission whenever you're ready for it, or take some time to partake in numerous side-missions or explore the city in search of collectibles and other secrets. And in this particular iteration of Assassin's Creed I had more fun with the side missions than the story missions since there was far more variety to them. Some of the side activities can be repetitive as well, though, such as the crowd events which have you stepping in stop robberies or running down an escaping thief, among other things. There are only a handful of these types of events and the character models used for the antagonists in each one never change. The collection of side missions known as

"Paris Stories" have some interesting moments as they often have you crossing paths with some of the famous names of the French Revolution. As someone who's always had an interest in history, I enjoy meeting so many famous names, even if the context was contrived.

One collection of side quests has you solving murder mysteries, something that I was looking forward to trying but found to be boring and disappointing. Solving a murder mystery involves walking around the scene of the crime and using your "Eagle Vision" which highlights clues to investigate. Once you've found all of the clues, you need to accuse someone of the crime, but there's usually only a couple of suspects and the guilty party is always obvious. Let's see, do I accuse the grieving widow or the person at the end of the trail of blood leading down the street? I really enjoyed the Nostradamus mysteries, though. These are each a series of clues are written in closed couplets and if you solve the riddle it will lead you to the next clue's location. Solve them all and you'll unlock a legendary Assassin's outfit. Of course you could cheat your way through them by finding the solution to each on the internet, but I encourage you to take the time to solve each one on your own. It's far more satisfying that way. 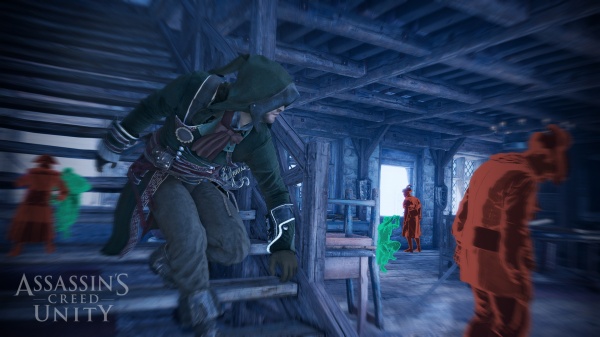 Unity features an RPG style gear system with different weapons and pieces of gear each coming with a unique set of stat-boosting attributes. There aren't any loot drops in the game, but you can visit one of the city's numerous vendors to pick from a relatively large assortment of gear. I like that there are options to both change your look and to boost your stats to match your play style, but an unbalanced in-game economy allows you to get too powerful, too fast, making the missions a lot easier than they were probably intended to be. The problem stems from the game's caf� system - you purchase a large theater early in the game that serves as your base of operations. It's also a source of income, and by renovating the theater, buying additional cafes in town, and completing the "Theater Missions", you can increase that income to one-percenter levels. Take a little time to concentrate on building up your financial network and you'll be sporting the best gear money can buy in no time.

Competitive multiplayer has been replaced in favor of co-op play in Unity, and rather than something that's an entirely separate mode, co-op play takes the form of missions within the game. Co-op missions are marked on the map as other missions are, although they are distinguished from single player missions by their red coloration. Co-op missions support up to four players, and you can either invite your friends to join or let the game servers find some fellow Assassins for you, although I have to say that I never had much luck with the automated player matching. Co-op missions can certainly be fun with friends as you work together to isolate and eliminate enemies while coming at them from different directions. Co-op missions can be played solo, although you'll face a much larger number of enemies while soloing a co-op mission than you will in any single player one. 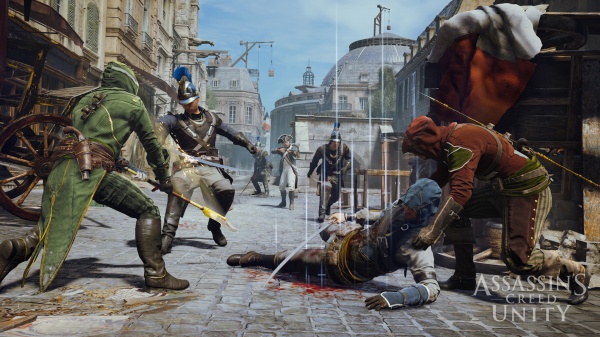 The magic of Black Flag is missing here, and it's not simply because of a lack of pirates. Unity can be an enjoyable game and its setting is an impressive achievement, but technical issues, a lackluster story, and an overall lack of variety in its missions weigh down the game. Perhaps a little less emphasis on technical achievement would have allowed the developers to deliver a less buggy experience and to spend more time developing the story and missions to make the overall experience more compelling.

Final Rating: 74%. Unity suffers from too much emphasis on a level of technical achievement that it falls short on delivering.