Hockey is arguably one of the most exciting sports on the planet. The National Hockey League contains some of the best athletes in the world; athletes who are not only strong and incredibly tough, but also as graceful as the best figure skaters. EA Sports' latest installment into the NHL franchise of games not only captures all of these aspects of the complex game of hockey, but does so in a way that leaves you constantly thirsting for more.

The NHL franchise has been around for many years, and is one of EA's most consistently good franchises, putting out games year after year that never feel stale, or unimproved from the previous year. NHL 15 is the franchises first step on to the next generation of consoles, and it did so mostly on a good blade (if you will), though there are a few places where the game still stumbles a bit.

First of all, the game plays beautifully. The controls are as tight as ever, with the overall movement of the players and the puck feeling very realistic and satisfying. For the first time, EA used a specific puck shape for it's model, and the result is absolutely stunning. The first time I scored a goal in the game, I watched the replay ten times just watching the way that the puck came off my stick, then bounced around the net once it was passed the goaltender. It was simply stunning to see that level of detail that this game had achieved, and it was only my first goal. 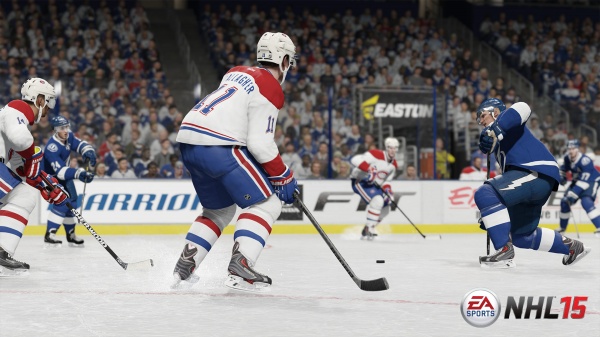 With each game I played, I learned more and more about the game itself. The skill stick was back, and, with the right player at the right time, could leave opposing defenders in the dust. The skill level of a player could really be felt as soon as you take control of them, as well as their size and speed. Some players can outskate anyone on the ice, and some deliver some of the most punishing hits that the sport has to offer.

The graphics are absolutely beautiful. I can't get enough of watching replays of players that actually look like their real-life counterparts to a scary degree. The jerseys, equipment, and ice all look spectacular, and are easily the closest that you can get to watching a live game on TV.

The hits and the fighting both can feel a little wonky at times, but overall leave a good taste in my mouth, because of how satisfying it can be to line up the perfect open-ice hit, or to win that fight that gives your team that little extra bit of energy that you need at the end of the game.

I enjoyed the presentation of the game this year, which is updated quite a bit from what it has been in the past. Every game begins with a "live" shot of the city that you're playing in, as well as pre-game commentary by Doc Emrick and Eddie Olczyk. The in-game commentary never gets boring, simply because of the massive amount of lines that were recorded by these two. As well, EA upped the number of crowd member character models substantially. The arena atmosphere is incredible as well, as the crowd really responds to whatever is happening on the ice, whether it be an odd man rush or a big hit, each one elicits a huge response from the crowd. I think the presentation really added something to the game, even though I believe that the added time and effort could have been put towards better things, such as added game modes or more online features. 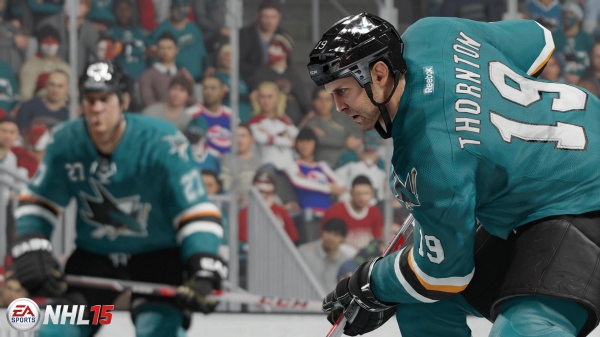 Now, on to the bad. NHL 15 is missing huge features and game modes that were prevalent in previous titles, and had come to be adored by fans. At launch, it was missing:

These things, though not a huge deal for me personally, have upset plenty of fans that believe that EA has shipped a half-finished product, and I'm inclined to agree with them that leaving some of these features out is unacceptable. However, EA does plan on rolling all of these features out over the upcoming month(s).

The game has trouble on the ice, too, as parts of it don't function as hockey truly should. The goals come much too often, which is exciting, but not realistic. In addition, things that would never draw a penalty in real life will always draw a penalty in this game, such as shoving an opposing player while he's posted up in front of your goal.

Still, these things are still very minor to me, and I very much enjoyed the game as a whole. I think that it's a step in the right direction as far as gameplay goes, and that it definitely could have been worse for a game on a new platform. Though I do sympathize with fans on the missing features and random other odd complaint about the game, I still feel like most casual hockey fans, and almost all hardcore hockey fans will enjoy playing this game, because I sure did.

NHL 15 definitely has its bumps and bruises, but is still an addicting and relatively realistic simulation hockey game that will leave you coming back for months and months to satisfy your hockey cravings.

Final Rating: 80%. It has some bumps and bruises, but it will still satisfy your hockey cravings.