Scarecrow has gotten into ACE Chemicals again, and his latest fear toxin gas prompts a mass evacuation of Gotham City. The deserted city streets are taken over by roaming gangs of criminals and the mercenary army of the masked Arkham Knight, a mystery villain who really, really doesn't like Batman. The evacuation of the city not only makes things easy for the Arkham Knight's extensive military hardware, it serves as a convenient excuse for the large and visually stunning open world Gotham City to be devoid of its citizenry. While this allows for Batman to go careening through the city's streets at breakneck speeds behind the wheel of the Batmobile without endangering the innocent, it also means that we'll just have to keep waiting for a game with a true living and breathing Gotham. As for the story itself, it suffers from the same sort of issues that plague most stories that try to juggle two major high profile antagonists and for the most part follows a rather predictable course. And it certainly doesn't help matters that the Arkham Knight comes across as more pouty and whiney than dangerous, acting like one of those overly sensitive people who fume over perceived insults that were never actually made. In fact, the Joker's supporting role is far more interestingly and cleverly executed than that of the Arkham Knight's costarring one, and I much more looked forward to seeing the Joker again as I made my way through the game than I ever did the annoying Arkham Knight.

While Scarecrow and the Arkham Knight may be the primary antagonists, the real star of the show here is the Batmobile which makes its first appearance in the Arkham franchise. It's hard not to have fun speeding through Gotham City in the Batmobile, a thrill ride made easy to enjoy by the fact that the Batmobile can plow through pretty much anything you hit so missing turns by a bit here and there isn't an issue - it did feel a bit odd, though, causing wanton damage to the buildings of the city I was supposed to be protecting. You don't even need to worry about striking criminals and violating Batman's code against killing as the Batmobile is equipped with an automated electrical field generator that gently nudges criminals aside and tazes them into unconsciousness. Even getting in and out of the Batmobile is thrilling. You can call it to you by remote control with the push of button and rely on it to quickly arrive - it's so reliable, in fact, that you can take a dive off of a tall building, call in the Batmobile, and make a smooth landing straight into the driver's seat. When you need to make a quick exit, you can eject straight into a high speed glide and seamlessly transition to traversing the city by cloak and grappling hook. 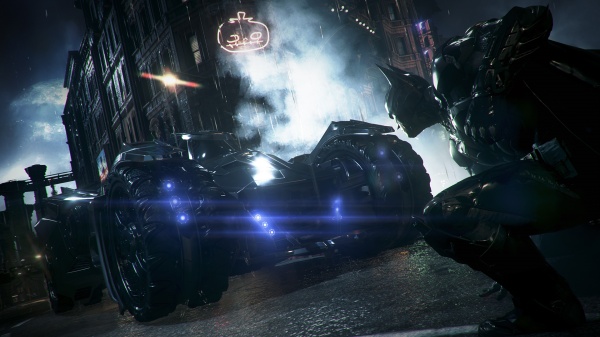 The game not only presents you with the Batmobile, the whole thing feels like it was designed around the Batmobile. Many of the major locations feature interior or underground roadways, so you'll be taking the Batmobile in with you on missions. Often the obstacles in your way are really obstacles to the Batmobile, and you'll spend enough time trying to make it possible to drive the Batmobile further that you'll certainly wonder why Batman doesn't realize that it would be a lot faster for him to just leave the Batmobile outside and make his way in on foot. The more time you take to maneuver ramps into place or hotwire control panels to open access doors is the more time you give criminals to proceed with their plans, right? Even when you're on your own on foot in a building, you may find yourself taking control of the Batmobile via remote control to perform some tasks outside like using a winch to pull down an inconveniently placed, non-load bearing wall.

Granted, the Batmobile is a large part of Batman's identity and modus operandi so seeing a fair amount of the Batmobile in a Batman game does give you more of the Batman experience, but Arkham Knight really does take things too far. The game rarely lets you traverse the city in or out of a mission without interruptions from squads of drone tanks, forcing you to switch the Batmobile into "battle mode". In this mode the Batmobile can maneuver like a cart, turning in place or crab-walking from side to side, and has access to missile and machine gun weaponry. The drones are kind enough to light up their weapons' trajectories, so battles will have you shuffling around to sidestep the beams while waiting for your weapons to reload, firing at a drone, and then repeating the process. It's a rather mundane affair made the more so by the fact that you'll have to go through it so many times. The activity that really pushes the gratuitous Batmobile usage over the line, though, comes courtesy of the Riddler. 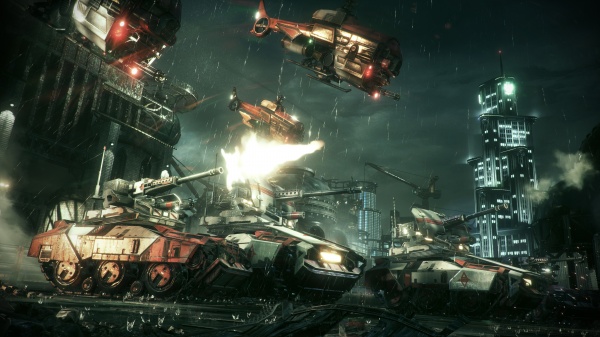 The largest of the side quest storylines features the Riddler, who has taken it upon himself to make "puzzles" for Batman that include underground racetracks scattered around Gotham. Make it to the finish line within the time limit and you've "solved" the challenge. Now comic stories need naturally be enjoyed with a healthy suspension of disbelief, but it's hard to fathom the Riddler having the time and money to secretly pepper the Gotham underground with massive racetracks - and that Batman, in spite of all of his skills and tech and the major crisis unfolding aboveground, decides to willingly play along. Now the Riddler side story is not exclusively about racing, but even if there were just one of these sequences in the game it would be annoying.

While crossing the city by Batmobile has its pleasures, my preferred method for getting around Gotham is to take to the rooftops. Stringing together grappling shots punctuated with long glides by cape with the city spread out below you is a totally enjoyable experience. The game does an excellent job of giving you the responsive controls and freedom of movement that it takes to make you feel like you can traverse the city purely instinctively just as Batman can, rather than leaving you fumbling with awkward controls, poor camera angles, and obstructive geometry. 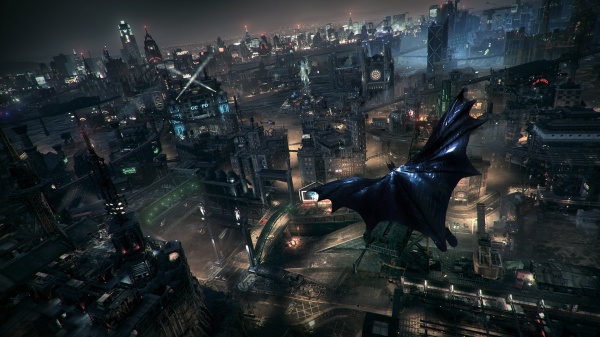 Arkham Knight also features the excellent fight system of its predecessors that allows you to take on a mob of criminals and dispatch them in a stunning display of fighting skills and acrobatics. The fights are still primarily timing-based, challenging you to land your punches and counters at the right times. Armed, armored, and charging foes all require a slightly different approach, and its again a testament to the game's controls that you can manage all of these while still knocking out the regular goons with deft precision as long as you are paying attention to the cues around you. A fear-based attack mode is also fun - get the drop on a group of nervous criminals and you can take them out one by one in a chain of attacks that play out in slow motion. Batman gets bullet time without the bullets.

Arkham Knight even gives you the chance to participate in some tandem fights with allies (Who? Well that would be telling...) giving you control of someone else other than Batman in a fight and letting you switch between characters by performing impressive tandem attacks that make the switch seamless. I so enjoyed these fights that I really wish that there were a lot more of them in the game.

So obviously there were a few things that I didn't like about Arkham Knight and some things that I wished were done better, but overall I did enjoy my time with the game. It's certainly a case of a game in which the good parts are so good that it makes the flaws really stand out. Overall, it's easy to recommend the game to anyone who played any of the prior games in the series, and to anyone who wants to play a game that brings you closer to the experience of being the Dark Knight than any other game before it.

Final Rating: 84% - Only Christopher Walken would think that this game needs more Batmobile.