Lords of the Fallen Review

Lords of the Fallen is a hack and slash action RPG developed by Deck13 Interactive and CI Games. The game plays like a mixture of Dark Souls and Darksiders. The combat is realistic like in Dark Souls, but the game is more linear rather than open-world - with side quests of course! The gameplay has a learning curve just like in Dark Souls, where I constantly died and had to restart, but once dead, your character leaves behind a ghost that can be retrieved to gain back any experience that was lost. I can't compare the game much to Dark Souls since I've only played Dark Souls just a little and the same with Darksiders, so this review will be more about discussing the game features no matter if they are similar to the latter games or not.

At the start of Lords of the Fallen, players are allowed to choose between three different classes that decide your starting stats and specialty weapons. You can choose between a Warrior, Cleric and Rogue. The Warrior excels with heavy armor, swords and a shield. The Cleric is best outfitted with medium armor, a hammer and a medium (kite) shield. The Rogue is best suited for light armor, daggers and light (buckler) shields. You can also choose a magic type that is separate from the class selection. The magic types are Brawling, Deception and Solace. Brawling focuses on boosting your attack power and has some high damage spells. Deception helps a player to deceive enemies. Solace is more of a defensive spell class and allows the player to boost defense and lower enemy defense. All of the spell classes have the "Prayer" spell that allows players to form a clone to attract enemies toward it so your character can attack from behind.

After choosing equipment and magic classes, you'll take on the role of Harkyn and begin your journey. Harkyn is a convicted criminal with his sins scribbled all over his face. He is let out of his prison by Kaslo to combat the fallen gods that have taken over the human realm and hopefully seek redemption in doing so. Only Harkyn's armor can be customized - his armor will look different based on what is currently equipped. The game takes place in the human world and a demon world called "Rhogar". You can go between each world and backtrack to find hidden areas and other secret passages that you might have missed the first time through.

The game has many save points spread throughout its areas. Save points allow a player to replenish potions and use experience to level up your character. Potions can be replenished by a certain degree per save point visit - you'll have to wait if you need to get a refill on several of them. Like Dark Souls, you'll constantly be chugging down potions to refill health. Experience can be used to boost stats or boost magic spell power. Rather than instantly using experience once you go to a save point, players can keep their experience for added bonus experience after defeating enemies and increase their chance at extra pickups from defeating more enemies. Basically, keeping a bunch of experience on your character is useful for extra bonuses while killing off more enemies, but you run the risk of loosing that experience once Harkyn is killed off. Like what was mentioned above, a ghost will be left behind for a while after your character is defeated in an area however, so you're experience is not instantly lost upon defeat, but it can be lost if you don't retrieve it fast enough. 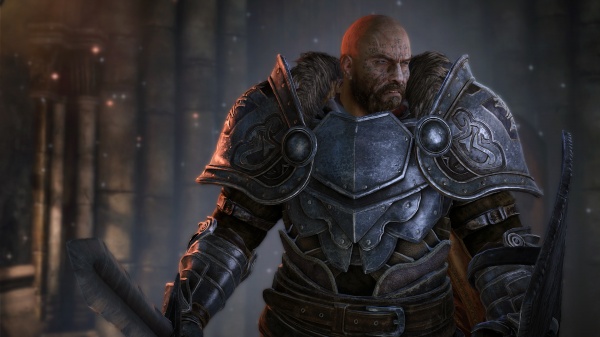 Harkyn has a health bar, energy bar and a magic bar all of which can be boosted based on stats. All attacks and dodges use up his energy. Players can block attacks with his shield, weapon or gauntlet and he can parry attacks with certain equipment as well. There is a light attack and a heavy attack and each attack can be charged for extra damage at the cost of a slower attacks and more energy. You can choose between three different styles based on your personal favorite method of attack - two-handed weapon style, weapon and shield style or weapon and gauntlet style. Two-handed allows players to swing faster at the cost of a downgraded block. Weapon and shield allows players to block more easily but your weapon attack will be slower depending on the weapon equipped. Weapon and gauntlet is similar to weapon and shield, but the player will be able to use gauntlet attacks. Each style can be switched during gameplay by pressing the Y/Triangle button.

The gauntlet allows players to perform three different types of special attacks that can be switched during gameplay. Players can perform explosive, projectile and close-range attacks. The gauntlet attacks don't seem like much at first, but once they are combined with a rune, they can be quite devastating. Many gauntlet attacks, weapons and armor can be combined with runes, while visiting a certain person in Rhogar. Runes give equipment added elemental damage or defense. For instance, players can equip a fire rune to the gauntlet's projectile attack that will burn an enemy once the projectile hits the enemy. Runes are found from enemies, but they must be forged into elemental runes. A certain amount of experience can be forfeited to have more of a chance for a more powerful rune during the forging process.

As mentioned at the beginning, Harkyn has a few magic spells that he can use based on the magic type that is chosen from the beginning of the game. All spells can be powered up based on your experience points and faith stat level. All weapons can be equipped no matter the class chosen at the beginning of the game but some weapons require certain stat levels to be reached before they can be used. Harkyn can wield steel swords, great axes, hammers, staffs, daggers and many other different weapon types and shield types.

Just like in Dark Souls, the main character can simply run by enemies, but will have to deal with the legion of enemies that follow - running can greatly help out for when you return to certain areas. The game has many boss battles and each boss has some sort of weakness that you'll start to see in time while fighting them. Bosses with a sword and shield basically require a player to dodge attacks and then counterattack from behind, and some of the bosses have other weaknesses as well. The game will take a player to a variety of splendid locations throughout the campaign. Players will get to visit catacombs, graveyards, dungeons and many other types of dark and dreary locations. The overall environments look quite pleasing and many environmental objects can be broken for possible item pickups or revealing secret passages. 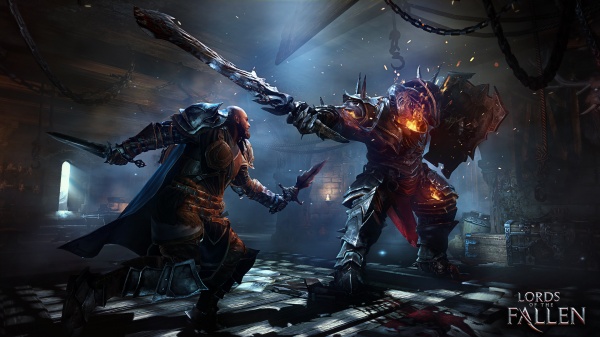 Lords has a few cutscenes and the game has a fair share of audio files to pick up. The story to the game didn't seem very deep from the cutscenes, but the overall lore found through audio files is interesting. The voices for the characters were well done, but none of the characters were ever that interesting to me. I did run into a few glitches while playing, one of which froze the game. There was one where my character didn't die on the final hit and I was able to move him around while he was on the ground, but I couldn't die. I had a boss get stuck in his attack pose a few times. The game didn't have a great amount of bugs, but there were there every now and then. One of the major problems that I found with Lords is that the game has these huge stages but there is no map at all. I would constantly miss out on some door that blended into the environment quite well or miss out on some nearby tunnel or simply get lost from the vast size of the dungeon area that I was in. A map sure would have been useful for overall exploration.

Lords of the Fallen is a really solid action RPG for those that are hungry for a current generation RPG similar to Dark Souls. The experience system in the game is quite unique if you're willing to take the risks associated with it and the overall combat is very satisfying. As usual, the game has a new game+ and many reason to replay it (extra weapons to collect, continue leveling, etc). I found the gameplay quite addicting and even chose to do some of the side quests instead of only focusing on the main story since it was an overall fun experience. If you're into action RPGs such as Dark Souls, Lords of the Fallen may be worth a try for you. It's not a vast open-world RPG, but the combat is fun and there is quite a bit to do.

The Good:
+ Addicting gameplay
+ Impressive environments
+ Keeping experience on your character allows for a player to earn more experience and extra loot during battles

The Bad:
- The game needs a map
- A few glitches at times

Final Rating: 78%. Lords of the Fallen is a decent hack and slash RPG that is worth a look for fans of Dark Souls.