Freedom Cry opens fifteen years after the events of Assassin's Creed IV Black Flag, and puts you under the Assassin's hood of Kenway's second in command, Adewale. The decade and a half separation between the original game and this DLC expansion effectively severs any continuity of narrative between the two, so you can jump into Freedom Cry at any time even if you haven't completed the Black Flag story. However, you'll probably want to hone your skills a bit in Black Flag before playing Freedom Cry as the DLC hits the ground running and is challenging from the get-go. 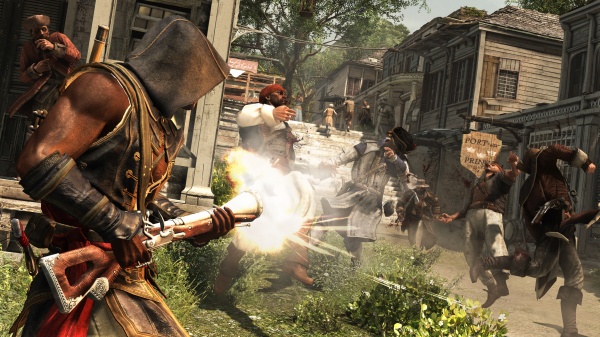 As Freedom Cry opens, Adewale, now a full-fledged Assassin, is in pursuit of a Templar and the mysterious package in his possession. Adewale takes the package but then an(other) inconvenient shipwreck washes him ashore near Port-au-Prince, where he finds a higher calling than the eternal struggle between the Assassins and the Templars. Solving the mystery of the package becomes completely secondary to liberating slaves and helping them to build an underground army known as the Maroons.

While many of the activities in Black Flag make a return in Freedom Cry, the focus in this DLC is on the new activities that have you releasing slaves from their bondage. As you make your way through Port-au-Prince you may encounter a slave trying to run to his freedom or another being punished, and in these cases killing the slaver will release the slaves from their bondage. Other activities, like freeing slaves on auction or releasing them from locked cages, require more skill to complete as more slaves mean more enemies guarding them, including brutal overseers. You'll also have to look over your own shoulder as jailers patrolling the streets are looking to throw anyone with dark skin back into bondage, including you, which can prove to be quite inconvenient especially if you're on a follow mission.

Outside of Port-au-Prince there are opportunities to free far more slaves by capturing slave ships on the high seas or raiding island plantations. Capturing slave ships is challenging because you have to defeat their heavily armed escorts while being careful to avoid damaging the slave ship itself and its human cargo. You need to keep the escorts at a distance while damaging them with mortar fire and attempting to separate them so that you can deal with them one at a time. Plantation raids are also challenging as they are crawling with guards and if you aren't careful and let them raise the alarm, the guards will begin to kill the very slaves that you are trying to free. Even getting to a plantation can be challenging as you may find its harbor guarded by a powerful ship of the line.

When you liberate slaves they either become freedmen or join the Maroons. Your totals of each are tallied in two columns, each of which has its own series of unlockable upgrades. The game will also sometimes lock the next story mission until you reach a requisite number of freed slaves, or until you raid a particular plantation or intercept a marked slave ship.

The DLC's focus on the West Indies slave trade completely changes the character of the game. At first there's a certain satisfaction that comes with the slaying of slavers that's somewhat akin to the cathartic killing of Nazis that comes with World War II based shooters. But what happens when you're making your way through a mission and you come across a slave trying to run away? Is saving him really an "optional" mission? And even if you take it upon yourself to free the slaves in every encounter you're fighting a losing battle. The game continually spawns these events, so no matter how many slaves you free Port-au-Prince remains a bustling center of the slave trade. It's a battle you can't win, either historically or within the context of the game. 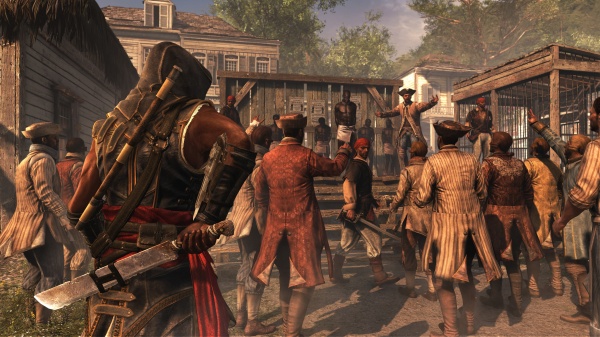 Playing your way through the DLC's nine story missions will take you about four to six hours, which isn't bad for a DLC expansion. Freedom Cry also includes its own map of the Caribbean, albeit a much smaller one than the one in Black Flag, so there's more gameplay beyond the story missions. Secret locations to explore, ships to plunder, treasure to find, ... more of what you (hopefully) enjoyed in Black Flag. You also get to play with a pair of new weapons in Freedom Cry, the machete and the blunderbuss. The machete makes the fights in Freedom Cry more brutal than in Black Flag - running a man through with a sword is one thing, cleaving his skull in two with a machete is quite another. The blunderbuss is the 18th Century equivalent of the shotgun. You can easily dispatch a crowd of four enemies with a single shot, knocking them back and taking their lives in the process. That one shot is all you get, though, since you have to reload a blunderbuss after each every shot and the reload time is too long to do safely while you're in the middle of a fight.

I enjoyed my time with Freedom Cry - it gave me more of what I liked about Black Flag, but with a story that made me feel like I was working towards a higher purpose than adding yet another chapter to the long and unending struggle between the Assassins and Templars. If you enjoyed Black Flag, then there's no reason not to give Freedom Cry a go. Even if you don't need more open seas to roam, the story missions are interesting and challenging enough to be worth the price of the download.

Final Rating: 88%. Freedom Cry delivers what you want from DLC: a new story that will take you hours to complete and more of the gameplay that you enjoyed in the original game.