Plants vs. Zombies: Garden Warfare turns the popular lane defense game for mobile devices into a full-fledged multiplayer third-person shooter for consoles and, interestingly enough, the new format almost feels better-suited to the quirky Plants vs. Zombies world. Zombies are no longer content to come shuffling along one after another in well-formed lines, and instead are now swarming the suburban battlefields as a chaotic mob. Plants have been freed from their rooted bondage, and likewise are free to move at will and meet the zombie threat from any direction. And although there's no narrative to explain the all-out war between the undead and anthropomorphic plants, and it doesn't make a whole lot of sense if you stop to think about it, it's a war that's certainly fun to fight.

Garden Warfare launched at a price point that puts it somewhere between a regular game and a downloadable release, and the game probably tends toward the latter in total content. There's no campaign game or story mode, just three multiplayer modes - two competitive and one co-op - and five maps to play them on.

The multiplayer modes both support twelve on twelve battles and are Vanquish, which is a team deathmatch mode for a game in which "kills" are called "vanquishes", and Gardens & Graveyards, a control point mode in which team defends and the other attacks. In Vanquish, the first team to reach fifty vanquishes wins the match, but each time someone revives a fallen ally a point is taken from the enemy team's score. 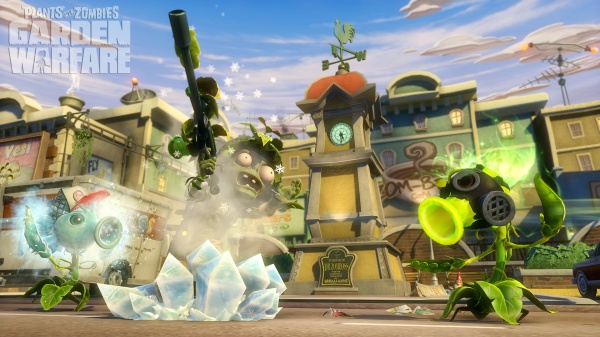 For Gardens & Graveyards, the attacking zombie team must take a control point from the defending plants team within a set time limit. If they succeed, the battle moves on to the next control point, and if not, the match ends. The final control point adds a unique twist to the battle. For example, on one map the final battle takes place on an island that the zombies must reach by launching themselves by cannons while the plants fire defensive cannon to stop them. This mode makes a nod to the original game in that the plant team can shore up their defenses by planting defensive plants in the flower pots around the control points and the zombies can spawn AI-controlled zombies and send them lurching toward the plants.

The co-op Garden Ops mode is a horde mode in which a team of up to four plants must defend a garden from waves of computer-controlled zombies, with some of the waves more challenging "boss waves". Survive all of the waves and the mode ends with an escape sequence in which the players must survive their desperate escape. This mode can also serve as a single player experience since you can set up a game and launch it without filling up all four slots. However, it's not a single player option to kill time while your internet connection is down - Garden Warfare is an "always connected" game and without access to EA's servers you won't be able to access any games.

The game is a class-based shooter, with four available classes per side. While these classes certainly share some of the characteristics of archetypical shooter classes, each one is rather unique. The plants have the Peashooter, Sunflower, Chomper, and Cactus, while the zombies have the Soldier, Engineer, Scientist, and All-Star, each of which has a basic weapon attack as well as a trio of special abilities/attacks. For example, the Peashooter shoots peas as expected, but also has a chili bean grenade, a super speed burst, and a gatling gun mode, while the Soldier has an RPG rocket attack, a jet-pack assisted jump boost, and a stink cloud bomb in addition to his machine gun like main weapon. The Chomper is the most unique of the classes - it can burrow underground for short stretches and then come back up under a zombie for a one-hit chomp, I mean kill, or rather vanquish. This may seem to be a pretty powerful attack, and it is, but the game is pretty well balanced and the zombies can counter with the Engineer's stun grenade which will pop a stunned Chomper back above ground. 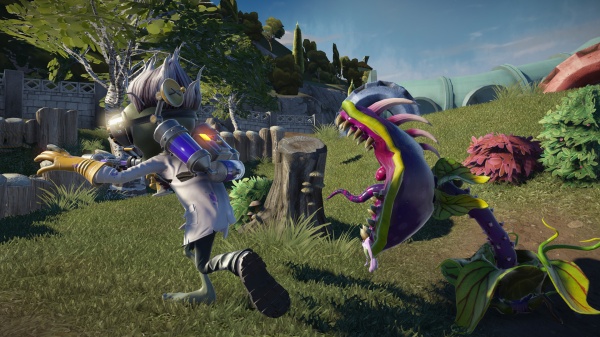 As you fight in matches you'll earn coins for everything you do that helps your team - vanquishes, assists, revives, etc. These coins can be used to purchase sticker packs after a match that include a random assortment of accessories for the game's characters. Some are purely cosmetic, but fun nonetheless, allowing players to give their characters a more unique look. Other stickers are used to unlock variants of the classes in the game, such as the Guerilla Peashooter which trades the Peashooter's splash damage for a high rate of fire. Collect all of the stickers for one of these and it becomes available for play.

The sticker packs certainly can push you to play an extra match or two just to collect the last coins you need to get that next pack and thankfully they're all obtainable through game play with nary a micro-transaction in sight. The downside is that the higher tier packs that contain more cards and a higher chance of rare items are pretty expensive and it can take a number of games to collect enough coins to afford them. And since the stickers are doled out at random and there are hundreds of them in the game, it can take a really long time for you to eventually luck into unlocking a class variant.

Overall the game is fun to play as the battles tend to be wild and frantic affairs, and it's all a nice change of pace in a genre crowded with games that take themselves very seriously. The uniqueness of the classes and the surprising depth to the interactions between them make the game less 'casual' than it appears to be on the surface, though. The lack of modes and game maps hurts from a variety perspective, and it's possible that some gamers will burn out on it long before they get enough stickers at random to unlock a class variant and inject a little more variety into the experience. However, it sure is a lot of fun while it lasts, and is a game that is easy enough to recommend.

Final Rating: 84%. An original ray of sunshine in a genre crowded with mindless clones.